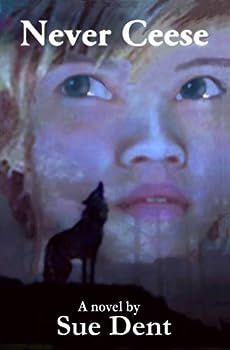 (Book #1 in the Thirsting for Blood Series)

This edition of Never Ceese is no longer in print and no NEW copies are available. I, Sue Dent, the right holder can't get Amazon to pull it so they'll continue to list it as new. Apparently they... This description may be from another edition of this product.

Wanted it to Never Ceese!

Published by Thriftbooks.com User , 14 years ago
At first? Reluctant. Next? Intrigued. By the second page? Thoroughly engaged. Sue has brought the urban mythos of vampires and werewolves to the spiritual plane. She causes her readers to delve into tragedy while hoping for redemption. Bravo! I eagerly await the promised sequel.

Published by Thriftbooks.com User , 15 years ago
Sue Dent changes and clarifies the horror of the Werewolf and the Vampire! In a well told tale, she reveals the evil behind the curses that have stolen the humanity of two tortured souls. This is a book that I recommend to the reader who is fed-up with the same drivel that has plagued the horror genre for years! Sue Dent has pushed aside the evil hero and revealed the tortured and damned souls of those cursed with Lycanthropy and Vampyrism! As we are led through the lives of these very real characters we feel the heartache and the lure the curses promise if they partake of human flesh and blood. We also see that the truth of their feeding, it is murder and human blood will stain their souls and seal the curse! Sue shows the light and how the Blood that was shed on the Cross can break the curse, if they'd only believe! I recommend this book highly!

Published by Thriftbooks.com User , 15 years ago
Werewolves and Vampires....oh my! Centuries ago, two unfortunates were wronged in the worst way imaginable; they were cursed by evil forces they did not bring down upon themselves. One was made a vampire, a creature of the night, forced to find sustenance on the life-blood of others, and subject to whims and passions never meant for humankind to experience. The other was bitten by the wolf, and is now a prisoner to the wild beat of nature, running with the pack, lost in the primitive uproar of instinct and survival. Perhaps worst of all: they are cursed to live with near immortality, to walk the face of the earth while those they love die, and if they do die while still in the grip of the curse; by either a silver bullet or a wooden stake, they will forever miss the chance of an eternity in heaven with those they love and care for. They have one chance, as this unlikely pair is drawn together by unseen forces, to reclaim their mortality and a chance to pursue a normal life, a chance to go home to heaven when they die, and it lies buried in a riddle cryptic as it is contradictory, Two wrongs make a right. Richard, the cynical, sarcastic vampire and Ceese, a culturally naive werewolf inexperienced in the ways of human beings, leave the comforts of home and the wild behind as they travel from England to New York in search of the one thing they desire more than anything: an end to their curse. However, working behind the scenes are forces that want them for other reasons, and none of them altruistic. As Richard and Ceese struggle to loosen the bonds on their souls, someone else lusts after what they have: immortality, power...and will stop at nothing until they have it for themselves. In her first novel, Sue Dent has crafted an intriguing mix of two genres yet thought exclusive; Christian faith-based fiction and dark, noir-fantasy, and it comes off well. The key difference between her novel and others revolving around vampires and werewolves is its focus: Dent focuses on that which our two protagonists want most, an end to the curse and chance for a restored relationship with all that is good and holy, and not on the aspects of the curses themselves. However, her touch is light here: it is not a Sunday school lesson with a pretty red bow at the end; it is a story about enduring faith and love. Richard is hopelessly sarcastic and cynical, evoking images of Tom Cruise's blond haired and egotistical Lestat, and Dent portrays Ceese as a poignant picture of what faith can do even in the thrall of the curse that damns her. Never Ceese is also rife with cultural humor and satire, and though the reader treads the dark streets of film noir and intrigue, they will find themselves chuckling out-loud just as many times as they shiver. Ceese ends with surprising plot-twists that work well but perhaps could have been hidden a little better, and it may have a theological "bump under the rug" here and there - but who cares? It is a work of fiction, and a crea

Published by Thriftbooks.com User , 15 years ago
Ok I finished the book and all I can say is WOW. Well I can say more than that but really WOW. It came yesterday and I finished it last night. I couldnt put it down! Never Ceese may be one of the greatest werewolf/vampire sagas of all time. The story pulled me in, and wouldnt let go until I'd read the last word. It proves that monsters aren't always the bad guys, and that faith can help you through even the most supernatural of circumstances. Ending with a suspenseful cliffhanger, it left me begging for more. Bravo!
Trustpilot
Copyright © 2022 Thriftbooks.com Terms of Use | Privacy Policy | Do Not Sell My Personal Information | Accessibility Statement
ThriftBooks® and the ThriftBooks® logo are registered trademarks of Thrift Books Global, LLC