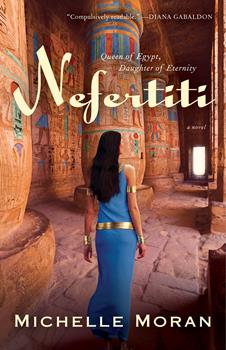 Fast-paced and historically accurate, Nefertiti is the dramatic story of two unforgettable women living through a remarkable period in history. Nefertiti and her younger sister, Mutnodjmet, have been raised in a powerful family that has provided wives to the rulers of Egypt for centuries. Ambitious, charismatic, and beautiful, Nefertiti is destined to marry Amunhotep, an unstable young pharaoh. It is hoped that her strong personality will temper the...

Published by Melissa , 2 years ago
I love this author and her books! The book I received was the exact version and quality I requested. Thank you!
Published by Thriftbooks.com User , 3 years ago
This book was wonderful! Michelle Moran will make you feel as though you are there in that very moment. Finding and reading this book has made me go after all of her books and I've read them all now! Every single one amazing!

Published by Thriftbooks.com User , 14 years ago
It was a great book if you like ancient Egypt. It is good even if you don't because the story line will capture you. This is taken from the point of view of Nefertiti's Half sister Mutnodjmet.

Published by Thriftbooks.com User , 14 years ago
I love historical fiction, and I love stories about Ancient Egypt, so when I first heard of Michelle Moran's Nefertiti, I couldn't wait to read it. I'm not sure why it took me over a year, but now I wish I had read it earlier. It really is an amazing book; Moran's meticulous details really make Egypt come to life. It is obvious that she is an accomplished researcher, and that she took her time writing Nefertiti in order to ensure that she had her details and facts straight. Michelle Moran has a blog in which she writes about recent archaeological discoveries, as well as her research for her third novel set to be released in 2009, Cleopatra's Bones. The site really is fascinating for anyone interested in history or archaeology; it's obvious that Moran is a real history buff! Unfortunately, I can't seem to find the site's RSS feed so I can follow it in Google Reader, which is a real disappointment. However, historical details alone do not make a good novel. Moran shines through the way she writes her characters as well. She manages to make Nefertiti a character the reader hates, pities, and respects all at the same time. The narrator, Mutny, has a strong voice. The reader really comes to care about what happens to her and the rest of the characters in the novel. The plot is intriguing; I was up late into the night trying to finish the book! You know you've found a talented author when you read a 470 page book in one sitting (especially when you were planning on going to bed early!) I have Moran's second novel The Heretic Queen sitting on my shelf right now, and after how much I enjoyed Nefertiti, I am incredibly anxious to read it! Four and a half stars rounded up to 5

Published by Thriftbooks.com User , 14 years ago
As an avid reader of historical fiction, I found this book to be very intriguing and addictive. The cover was what caught my attention in the bookstore, and I decided to give it a go. It started a bit slow for me, but picked up very quickly after a few chapters. The amazing part of this novel was how it really brought history and its characters to life. The characters felt real and believable, and were very animated in my mind as I read through the novel. Another great thing was that the author didn't spare the reader any angst; this was not a happy book. It had it's moments that made you feel good as the reader, but for the most part it was filled with strife. This was another reason it had a very real feel. Obviously, this author is very knowledgeable about the era and subjects she wrote about, and this is clear throughout the novel. It takes a skilled writer to put together a book like this. Overall, it was an amazing read that I couldn't put down after I got into it. I am still thinking about... it is one of those stories you really wish you could experience in life, but this book is almost as good.

Published by Thriftbooks.com User , 14 years ago
This novel is a story of two sisters, one whose drive and ambition take her to the top of the world and the other who just wants a normal life....far away from the dangerous political games her sister is playing. Nefertiti and Mutnodjmet (Mutny) grew up leading quiet lives in rural Egypt. All this comes to a screeching halt when Nefertiti is chosen to be Chief Wife of the hot blooded Pharoah with an obssession for Aten, a minor Egyptian god. Nefertiti is chosen by her Father and her Aunt, the Pharoah's mother, because with her strong personality they believe she will be able to reign in the Pharoah and temper his hand ensuring that it is their family that holds the real power behind the throne. Nefertiti soon becomes enamoured with her new found power and her popularity with the people and is somewhat swept up along with her husband in his dreams of glamor, power, and immortality. On direction from her father she does what she can but she is unable to stop the Pharoah from using the Army to build a brand new city in the middle of the desert designed to honor Aten and be a monument to him and his queen....an army that is desperately needed to stop a Hittite invasion threatening from the north! To further complicate matters, her family's position is threatened by Kiya, the Pharoah's other wife, and her schemeing Father because while Kiya has given Egypt a prince Nefertiti gives birth to one daughter after another. Meanwhile, Mutny becomes her sisters handmaiden and remains her closest friend and confidante. But secretly she longs for a family and a home of her own. This seems impossible as she is required by her family to play her part in keeping them the most powerful family in Egypt. As her sister rises higher and higher, Mutny feels more and more trapped in a destiny that is not her own. Finally, a tradgedy forces her to claim her independance and break away from her sister to start her own life on her own terms. This was an exciting novel that was full of action, wonderful period detail, and it had a compliated, interesting plot. I've not read much fiction set in ancient Egypt but this has certainly wet my appetite for more. The characters are well rounded and complex and the relationship between Nefertiti and Mutny is beautifully depicted. There is a scene that had me laughing out loud where they are both praying to the Hippopotomous goddess of fertility but they just can't seem to stop their sisterly bickering long enough to get through the prayers. I don't know it the author intended the scene to be humorous but I found it charming as well as funny. There is also an interesting dynamic between the Pharoah and his daughters. The reader expects him to be dissapointed as Nefertiti gives him daughter after daughter but each time the Pharoah is overjoyed. I won't give the reason away but I thought it was a brilliant look into his mind. This story makes me want to research and learn about ancient Egypt, esp. Mutny and Nefertiti. I foun

A captivating tale about a cunning Egyptian queen

Published by Thriftbooks.com User , 14 years ago
"Nefertiti" is an amazing novel about one of Egypt's most legendary rulers. This is the tale of Nefertiti's ambitious rise to the throne, but it's also the story of the relationship between two sisters. Nefertiti's half-sister, Mutnodjmet, is the narrator of the book, which chronicles Nefertiti's marriage to Prince Amunhotep until the time of her death. Similarly to "The Other Boleyn Girl," author Michelle Moran depicts two sisters who are as different as night and day, but ultimately will do anything for each other. Nefertiti is calculating and shrewd, and she plots with her father to keep her family in favor with the Pharaoh and make sure that his second wife, Kiya, stays out of the picture. However, Mutnodjmet doesn't approve of her family's deceitfulness, and she also yearns for a life of her own that amounts to more than being her sister's handmaiden. Eventually, things in Egypt begin spiralling out of control. The Pharaoh and his queen seek to transform religion in their country by raising their god, Aten, up above all others. The rulers also display extreme vanity, having sculptures and murals created in their likeness and placed all over a new city they built as a tribute to Aten. Aided by her family, Nefertiti will stop at nothing to secure ultimate power for herself, and even manages to obtain the title of Pharaoh. However, tragedy eventually comes calling, and everything Nefertiti worked so hard to achieve hangs in the balance. This is a fantastic book that's extremely exciting and readable. It's obvious that the author took many liberties with historical facts and also speculated about a lot of things, but judging this book purely as a work of fiction, "Nefertiti" is wonderfully gripping and entertaining. I couldn't put it down!
Trustpilot
Copyright © 2022 Thriftbooks.com Terms of Use | Privacy Policy | Do Not Sell or Share My Personal Information | Accessibility Statement
ThriftBooks® and the ThriftBooks® logo are registered trademarks of Thrift Books Global, LLC