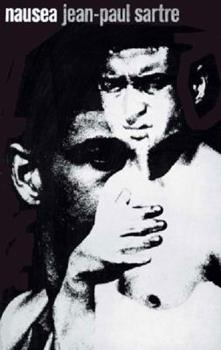 This novel is both the story of the troubled life of a young writer, Antoine Roquentin, and an exposition of one of the most influential and significant philosophical attitudes of modern times - existentialism

Published by Felix , 8 months ago
This book is just about someone doing the same things everyday and having a lady friend who he never really committed to leave and what did you expect. So I guess it's a pretty normal life.

Published by Mikey , 3 years ago
An exemplary work of literature. Perhaps some day I will understand it.

Published by Thriftbooks.com User , 18 years ago
With his first novel, Sartre began to explore what would later come to be known as existentialism, or the philosophy that: 'Holds that there is no intrinsic meaning or purpose, therefore it is up to each individual to determine his own meaning and purpose and take responsibility for his actions'. While this line of philosophical thought does have its origins in Kierkegaard, it was in the writings of Simone de Beauvoir, Albert Camus and Sartre that these ideas were fully developed. Antoine Roquentin is a solitary man, recently afflicted with a recurrent feeling, one that he terms 'the Nausea'. At times, he feels that life is repugnant, a vapid, shallow game between mindless people who have no real idea of their own purpose or consequence, himself included. At first he dismisses these feelings as the typical lonely thoughts of an ageing academic who is unable to complete the book he has been researching for years, but as the feeling continues and he is able to examine himself with greater and greater clarity, Roquentin begins to learn that maybe he has stumbled upon one of the great truths of our reality. He discovers that there is no essence, no importance in motion or in the petty labels that people like to attach to themselves and others in a bid to catalogue the world and everything in it, and by cataloguing, to control. He reasons that we are essentially impossible to control, that each person exists because they exist, and for no other reason that that. The terms of our existence are unspecific, but clear. We do not exist to be pawns to a god, or to move the path of humanity forward. Instead, we exist simply to exist, we are an end unto ourselves, and the inherent absurdity in our lives means that a meaningful existence is impossible and even blasphemous. Through clear-eyed, coherent thinking, we are able to control our lives as we choose, and it is up to every man and woman to independently reject suicide. For those that do not, the meaningless quality of our lives makes no different when compared to those that do, thus there is no dishonour or achievement in either. During the novel, there are a few side stories involving an ex-lover and a child-molesting friend, but these characters are used mostly as foils for Sartre's philosophy. In presenting arguments to Roquentin, Sartre is able to adequately satisfy the objections to his philosophy. There is a sense, however, that while the elements of existentialism presented in Nausea are powerful and compelling, the picture is not yet complete and no real answers are given. Later on in his career, Sartre was able to provide a large number of these answers, but even this early on, with his first novel, the depth of his thinking and the power of his message is quite simply amazing. Nausea is a stunning book, an intellectual delight, and is recommended to all.

Published by Thriftbooks.com User , 20 years ago
Nausea is the difinitive work of Jean-Paul Sartre and reflects the nature of the existential movement. Often oversimplified as boring, depressing or pointless; Nausea is in fact a phycological journey for the courageous thinker. It poses and answers many important existential questions through the interactions and ruminations of the main charecter, Antoine. The book is so well written and translated that the discriptions actually transform your philisophical state - you feel the Nausea. This little book is also packed with information, and calls for so much self-exploration, that it is sometimes described as hard to read. If taken slowly and internalized, this is an endlessly rewarding read.

Quite the Angelic Book

Published by Thriftbooks.com User , 20 years ago
This book, La Nausee, was certainly a gift from heaven. As I read it in front of the fire, over the shoulder of a gorgeous male, with a pathetic man at the window, I was struck by the poetry of the whole thing. La Nausee speaks about scruples, existentialism, and curmudgeons. Life is not all one big Remington Party, it points out. Au contraire, we must pay attention to love (the heart), honour (the crown), and friendship (the clasped hands). One can lose their soul in this book, so be careful not to get too involved. Not only is it extremely deep, it is also a very attractive book. Angelic!

Published by Thriftbooks.com User , 21 years ago
When I bought this book I could not put it down. The emotions and thoughts that Antoine has very much mirrored the way I felt about life and existence. As a few of the reviewers have pointed out, the whole story is depressing and grim. This is the whole point of the story!!! Life and existence, as the books name suggests, is nauseating and disgusting. The writing style of Jean Paul Sartre is nothing less than breath taking. The anger, the depression, and the fear of existing is captured beautifully in Sartre's writing. Highly recommended if you want to learn and get a feel of the main ideas of existentialism.By the way, as to the question of "If existence is meaningless, why not just kill yourself?" Well, why do people climb mountains if they are just going to come back down? Some people create their own personal purpose and give meaning to their lives through some medium. So, why not kill myself? I suppose it's the same reason Bertrand Russel didn't kill himself: I wish to learn more Mathematics. Anyways, Albert Camus answers this very question with lucid prose in his book "The Myth of Sisyphus."

Published by Thriftbooks.com User , 22 years ago
Nausea is one of the most powerful literary experiences one can find. The form of the novel enables us to enter into Sartre's brilliant (and warped)mind. There is a sort of inexplicable energy that keeps on pushing you to read further and further- it is impossible to put this book down. The work can be appreciated as a novel for the quality of the story, but can also be understood as a powerful argument for Sartre's existentialist philosophy. He takes the reader through different alternatives to realizing that one's knowledge of one's existence makes one sick or creates nausea. Common escapes such as glorifying the past, the hope of relentless self-improvement,placing faith in love, are all explored and dramatically proven by Sartre to be false delusions to the truth that human existence is sickening.
Trustpilot
Copyright © 2022 Thriftbooks.com Terms of Use | Privacy Policy | Do Not Sell or Share My Personal Information | Accessibility Statement
ThriftBooks® and the ThriftBooks® logo are registered trademarks of Thrift Books Global, LLC