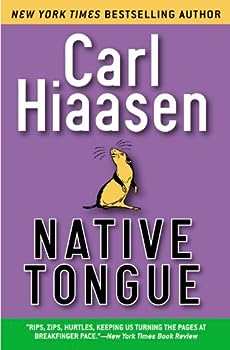 Now reissued--one of the most beloved novels by the "New York Times" bestselling author in which dedicated, if somewhat demented, environmentalists battle sleazy real estate developers in the Florida... This description may be from another edition of this product.

Hiassen gets in some wicked licks

Published by Thriftbooks.com User , 20 years ago
I picked up Hiassen's "Sick Puppy" at random a couple years back, and then rushed right out and grabbed this one. Nitrous oxide has nothing on these two elevators. I haven't laughed so hard, so continuously, since P.G. Wodehouse ushered me into the presence of the immortal Jeeves thirty years ago.Hiassen's work seems to divide neatly into the early stuff, up through Skin Tight, which inhabits the same danger-ridden, darkly comic territory as Elmore Leonard, with similarly razor-edged dialogue; and the later stuff, which forms a genre of its own, savagely satirical farces that cast credibility and all sense of human decency and restraint to the winds in order to skewer every form of foible and malefaction. I love them both, but prefer the latter, to which "Native Tongue" squarely belongs. Here the targets range from Sea World to Disney to phone sex purveyors and their clients to fuzzy animal lovers to bodybuilders to birdwatchers. With his usual heaping helpings of lawyers, developers, politicians, and like members of the lower criminal orders. Not least among them, tied like Pauline to the railroad tracks of imminent extinction, those adorable blue-tongued mango voles. And you won't want to miss a single savory chunk of kabob on the master's shish.I notice that the reviewers all seem to like best the first Hiassen they happened to read, and I'm no exception. This one, "Sick Puppy", and his first entry , "Tourist Season", by me are the champs. But I suspect if you were to ask Carl for his favorite, he'd direct you straight here to his Cage au Voles, because this is the one where he got to lampoon the South Florida theme park - an excrescence so dear to his heart that he made it the subject of "Team Rodent", his only nonfiction volume to date.

It's as good as they say

Published by Thriftbooks.com User , 21 years ago
I had read many references to Carl Hiaasen and decided to give him try. I'm glad I did! I heartily recommend this book - especially for those of us in the stormy eye of real estate development juggernauts. With its "outside of the box" characters, "Native Tongue" is often riotously funny, reminiscent of Tom Robbins. Hiaasen has a cautionary but hopeful tale to tell of Paradise being lost, and he does so with flair and panache, without being "preachy." I look forward to reading "Team Rodent,"a non-fiction account of how he *really* feels about Disney.

Published by Thriftbooks.com User , 23 years ago
This is my first Hiaasen novel, and I read it in two days during the approach of Hurricane Bonnie. I just couldn't put it down! The whole thing is so unrealistic, that you can't help but believe that everything in the entire book is true. This world is just that wacky! And it has something for everyone... Mystery, murder, comedy, sex, passion and a cause. I can't wait to receive my next Hiaasen novel!

Published by Thriftbooks.com User , 24 years ago
Although I am that rare creature who was born and bred in Florida, you don't have to be a native Floridian to be taken over by Carl Hiaasen's NATIVE TONGUE. The characters are just too weird to be real and yet, when you think about it, you know you've met people like them, just not quite as overt about it. From the eco-hippie ex-governor of Florida to the guy who meets his dimise in a most unusual aquatic encounter, they will grab you by the throat and won't let go till the last page has been turned. As for the plot, well, it's got more twists and turns than a sailor's knot and a lot more laughs too. The really neat trick that Hiaasen pulls on you is that his fiction gives you the sad truth in a way that keeps you from crying. This has to be the funniest book I've ever read.
Trustpilot
Copyright © 2022 Thriftbooks.com Terms of Use | Privacy Policy | Do Not Sell My Personal Information | Accessibility Statement
ThriftBooks® and the ThriftBooks® logo are registered trademarks of Thrift Books Global, LLC