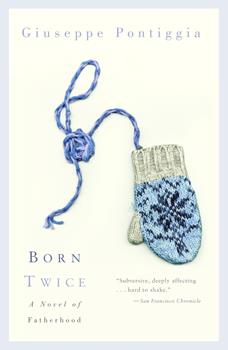 When a breach birth leaves Paulo severely disabled, his father, the articulate, unsentimental Professor Frigerio, struggles to come to terms with his son's condition. Face to face with his own limitations, Frigerio confronts the strange way society around him handles Paolo's handicaps and observes his surprising gifts. In spare, deeply affecting episodes, the professor of language explores the nuanced boundaries between "normal" and "disabled" worlds...

Published by Thriftbooks.com User , 15 years ago
Sometimes you can judge a book by its cover, or in this instance the dust jacket. I picked this gem up at a used bookstore in the French Quarter in New Orleans because of the beautifully colored butterflies on its cover, because of its publisher-- I seldom go wrong with Knopf-- and after reading that its author whom I had never heard of previously had won Italy's most prestigious literary award for it. Giuseppe Pontiggia's BORN TWICE (translated by Oonagh Stransky), labeled "A Novel of Fatherhood" is I suppose appropriate reading on the eve of Father's Day as well. The narrator is Professor Frigerio, a teacher who relates 30 years of the life of his son Paolo and how his son's disability affects the members of his family's lives. Paolo is the victim of an incompetent physician who should have ordered a C section for his mother and did not. The sad results are that both Paolo's speech and gait are impaired although he is quite brilliant. The Frigerio family and their circumstances sound all too familiar: the doctors at first are not completely honest about Paolo's diagnosis. Then a psysiotherapist tells them the truth ('"But this child has brain damage!'") and they choose to reject her. Paolo's older brother Alfredo is jealous because his disabled brother gets all the attention. In an obligatory group therapy session that the Frigerios attend, a woman whose son isn't very seriously damaged takes great comfort in knowing that others in the group are worse off, "like a first-class traveler visiting the third-class deck." After all the exercises that the father puts his son through, he realizes that Paolo would have made the same improvement if left alone, but all the gymnastics had given the family hope. Professor Frigerio and his family will wrap themselves around your heart. Having a brain-damaged child is nothing that any parent would ask for. Although the game isn't easy, this family, however, makes the best of the hand they have been dealt. Some of their trials are almost too painful too read. The novel opens with the young Paolo's falling down an escalator when his father fails to catch him. Of course a crowd gathers. [Frigerio:] "I watch him walk off, reeling like a drunken sailor. No like a spastic. Suddenly he turns and says in that labored way of his, '"If you're embarrassed you don't have to walk next to me. I'll be all right.'" In another section Professor Frigerio attempts unsuccessfully to photograph his son with his chin in his hands so he would look like a cherub in a Renaissance painting. The book is of course about the love of a father for his son: "Sometimes I shut my eyes and then quickly open them again. Who's that boy [now 30 years of age] walking unsteadily near the wall? I've never seen him before. He's disabled. I try to think about what my life would have been like without him in it, but I can't. We can think of many lives but we can never disavow our own." Finally, the significance of the title of the novel: when Paolo

A heartfelt story which defies classification.

Published by Thriftbooks.com User , 20 years ago
Labeling this book a "novel" does it as much of a disservice as labeling the main character's son Paolo "disabled." In both cases, the labels are limiting. And limits are what the book is all about--the limits Prof. Frigerio feels in his ability to help his son, the limits of the public institutions set up to help the family, the limits of everyone's patience, the limits of Frigerio's ability to identify with his son's problems, and his son's limits in helping the world to know him and his abilities.More a memoir about Paolo's childhood than a novel, the book sensitively and uncompromisingly portrays the difficulties of raising a child whose abilities are limited in some areas but normal in others. A medical mistake at Paolo's birth has left him unable to walk or talk like other children, though he is intelligent, and Professor Frigerio and his wife must take the lead in finding help for him and for themselves. Early on, a doctor tells Frigerio, "These children are born twice. Their second birth depends on you, on what you are able to give to them." Taking this to heart, Frigerio works to find therapists, support groups, a nurturing school environment, psychologists, and whatever else it takes to ensure that his son has the best possible chance for success.By turns philosophical, humorous, resentful, and highly sensitive, Frigerio is an acute observer of the reactions of other people, including the medical profession, toward his son, and he speaks to the reader in uncompromising terms. Intentionally or not, however, he remains at a distance, as much an observer as a participant in his son's life, and his wife and older son Alfredo, who are as directly affected as Frigerio, appear infrequently. Paolo's brief appearances late in the book, as he deals with a crank phone call from a teenage girl, with a vacation trip, and with an opportunity to appear on stage give the reader an opportunity to know him a bit as a person, rather than as the almost silent inspiration for this book. The author's dispassionate approach is successful in maintaining the dignity of all the characters, an unusual (and welcome) approach in these tell-all times, though it does come at the expense of some reader involvement. Mary Whipple
Trustpilot
Copyright © 2022 Thriftbooks.com Terms of Use | Privacy Policy | Do Not Sell or Share My Personal Information | Accessibility Statement
ThriftBooks® and the ThriftBooks® logo are registered trademarks of Thrift Books Global, LLC