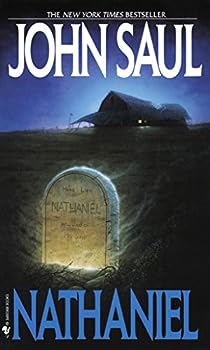 This description may be from another edition of this product. For a hundred years, the people of Prairie Bend have whispered Nathaniel's name in wonder and fear. Some say he is a folktale, created to frighten children on cold winter nights. Some swear he is a...

Published by Thriftbooks.com User , 15 years ago
I found this in a thrift store for like 50 cents and thought I'd give it a shot. I expected it to be pretty bad, like any cheesy horror book. But I was wrong. It was excellent. Extremely well-written, evocative, suspenseful, great characters, etc. It's been a year and a half since I read it and it still sticks with me.

John Saul is the master of suspense

Published by Thriftbooks.com User , 20 years ago
John Saul has done it again I have read just about every book ever written by Saul and I think he is in a league with King! I've have never read a story by him I have been disappointed in. Nathaniel has a clever dialogue that kept me guessing to the end of the book. There were characters in there you could identify with living in a small town!

Published by Thriftbooks.com User , 21 years ago
I was so excited to finally read a great ghost story! The way Saul introduces so many characters and themes and just ties them together at the end is truly awesome. I recommend this book to all ghost story lovers!

Published by Thriftbooks.com User , 22 years ago
I RECENTLY FINISHED THIS ONE, AGAIN. MY MOTHER PICKED THIS BOOK UP ON A LONELY TRAIN RIDE FROM NEW ORLEANS TO RICHMOND SOME YEARS BACK AND PASSED IT ON TO ME. I'VE READ NATHANIAL AT LEAST FOUR TIMES, AND IT GETS BETTER EVERY TIME. JOHN SAUL IS UNDER-RATED, IN MY OPINION, HE IS THE BEST.

A Lot Better than I expected, oh man!

Published by Thriftbooks.com User , 22 years ago
For an author who has been called by some as a "wanna be Stephen King" this was definitely not what I expected. Sincerely chilling and disturbing I don't see how Mr. Saul's fanbase isn't much, much larger than it is. This is a serious case of critics being wrong, (and when I say wrong I mean they missed the freakin' moon on this one) A superb tale of supernatural intrigue in a small town setting. Hands down, if you like horror fiction (I'm not just talkin staples like Dean Koontz and Stephen King, I mean like John Farris and Peter Straub) then don't pass this one up.
Copyright © 2020 Thriftbooks.com Terms of Use | Privacy Policy | Do Not Sell My Personal Information | Accessibility Statement
ThriftBooks® and the ThriftBooks® logo are registered trademarks of Thrift Books Global, LLC