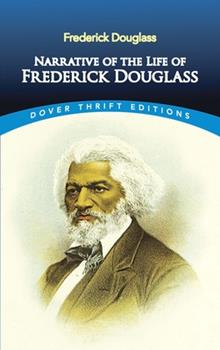 Narrative of the Life of Frederick Douglass

Former slave, impassioned abolitionist, brilliant writer, newspaper editor and eloquent orator whose speeches fired the abolitionist cause, Frederick Douglass (1818-1895) led an astounding life. Physical abuse, deprivation and tragedy plagued his early years, yet through sheer force of character he was able to overcome these obstacles to become a leading spokesman for his people. In this, the first and most frequently read of his three autobiographies,...

What a great man.

Published by Aaron Henry , 26 days ago
Great read and a great man. The book seems a little incomplete as it would seem mr Douglass was wary of divulging too much information at the time. Sad really. If you want to know more of his story you’ll have to piece it together from other books.

Published by Chris , 4 months ago
A compelling look at slavery and leaving its clutches, how I wish this was not a reality for so many people.

Good Read. The subject is quite good.

Published by Pulp Fiction , 1 year ago
Quite expressive and tells about how a lot of people felt especially those that were in the same situation!

Published by Brenda , 1 year ago
I am so glad I purchased this wonderful book about the life of one of America's greatest minds! Frederick Douglas was the real man, speaking from experience, and his were hardly those any of us could imagine, he earns his credibility to speak of slavery, politics and life, & he does it with great wisdom. What an honorable man, and I cried in disbelief that stupid, ignorant idiots were tearing down the statue of a former slave who raised himself up to surpass the intellect, intelligence, wisdom, and more of most people, especially of the idiots who desecrated his statue. Made me sick. Ignoramus'. Know nothings. Frauds. Frederick Douglas outclassed you in every aspect of living honorably, being respectable, leaving a legacy, being a man! Read this book!

Published by Maddie , 1 year ago
I bought this book to read with my AP Language class for school. Normally I’m not big on memoirs, or really nonfiction in general, but I entered this with an open mind. Douglass told his story in a way that was enjoyable and educational, I cried along while reading and felt as if I was there. He truly was an eloquent author. This classic should be a requirement for all Americans to read! Glad to have this classic on my shelf!

The Reality of a Slave's Existence

Published by Thriftbooks.com User , 16 years ago
One would expect the autobiography of any individual to be bursting with emotion, heartfelt feelings coursing through the sentences, each word blaring the author's perspective on any institution baring his/her interest. Yet, the Narrative of the Life of Frederick Douglass adheres not to the common stereotype of such work, relying heavily on statements of fact and observation, rather than personal standpoint and beliefs, to illuminate the cruelty and inhumanity which slavery imparts upon its host. The absence of these common aspects does not detract from the profound nature of his work, as the objectivity lends more credence to his argument in that it is not tainted by prejudice, hate, or anger. He simply describes the world as it was, not as he perceived it to be, recounting his journey from slave to freeman in a manner almost entirely numb, surprisingly detached. The strategic style employed in the narrative grants Douglass the ability to argue, in a sense, without arguing. By merely stating fact, through details both vivid and overwhelming, the Narrative of Frederick Douglass has become a powerful testament to the devastating brutality of slavery, displaying with an unconquerable clarity the evils prevalent in both the abhorrent institution and the society which promotes it, thereby educating a people bent on callousness and inspiring the suffering minority towards hope. The Narrative of the Life of Frederick Douglass was fairly simple to read and thoroughly moving, as with each page my eyes grew wider and wider at the atrocities committed in the name of slavery. I am sure he must have acquired a modicum of animosity towards the slave owners, but is not present in the work and thus allows each word to ring true. In this, he is very similar to Virginia Woolf in her feminist essay, "A Room of One's Own." She felt that when one is devoid of any prejudices or anger in their work, it calls for a greater, more powerful argument. Woolf strived to write her essay in the objective style employed by Douglass in his narrative. She wrote, "The woman who wrote those pages [of Jane Eyre] had more genius in her than Jane Austen; but if one reads them over and marks that jerk in them, that indignation, one sees that she will never get her genius expressed whole and entire . . . She will write in a rage where she should write calmly. She will write foolishly where she should write wisely. She will write of herself where she should write of her characters (ix)." The greatness of this work lies in the author's technique, his objective, thoughtful style, which remains honest and true when so much in the society he dwelled sprouted from lies.

Published by Thriftbooks.com User , 20 years ago
Anyone who wishes to be considered at all educated in the history of the United States MUST read this book. The period of this history is absolutely critical to an understanding of the country both before and after that time, as well, obviously, as during that time. And without reading the account of this great American of his experiences, one can not, truly, understand that time period.Granted, there will be those who will argue, "But why should we need to read an anti-slavery tract; there's no one alive now who would argue in favor of slavery, or deny that it was a great evil. To read a book whose primary purpose was to convince people of what is now considered obvious is pointless." But the same argument could be used to apply to reading a biography of George Washington, or Thomas Jefferson. Most of the issues that were important to them are currently decided, and decided in their favor. Yet it is still considered neccessary for an educated American to have at least a passing idea of the history of their lives.The same is true of Frederick Douglass. The man risked his life for freedom, just as surely as did Patrick Henry, or any of the founding fathers, and his history is just as much a part of this country as theirs is; further, it is worth seeing just how literate a man born in slavery, not only self-taught, but self-taught on the sly, against every effort of his oppressors to stifle his education, can be. His facility for language is frankly better than 90% of modern Americans of any color, in spite of virtually universal education. He was a great man, and deserves to be recognized as such.

Every American must read this book

Published by Thriftbooks.com User , 22 years ago
A brief and thrilling account of the actual life of an American slave in Maryland in the 1830's and 1840's. The scintillating and exquisitely precise prose is all the more amazing when you consider that Douglass had no formal education, and virtually taught himself to read and write. He pulls no punches, and anyone who ever thought even fleetingly that slavery was "not so bad" should read this page-turning powerhouse. Not to be missed on any account.

Narrative of the Life of Frederick Douglass, an American Slave Mentions in Our Blog