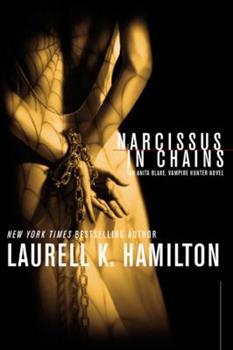 Anita Blake finds herself caught in a deadly triangle between the two men in her life, men whose immortal powers of werewolf and vampire can give her the strength she needs to overcome a deadly enemy or destroy her soul.

Some will love it, others will hate it.

Published by Thriftbooks.com User , 14 years ago
This book continues the evolution (or devolution, depending on your point of view) of the Anita Blake character and the series as a whole. At the beginning of this series, the sex was rated PG, the violence R. As the series has progressed, the violence has remained constant, the sex become more prevalent. In "Blue Moon", the book two before this in the series, I said that the sex had matched the violence. Now, it has surpassed it; if you truly care about such things, I have to say that the sex in this book could be rated "X". I've read unapologetic porno novels that have less graphic sex. Of course, this one's written light years better than any of them, but that doesn't make the sex any less graphic. Me, I love it. I find the plot development of the "good little Catholic girl" who finds herself turning into a succubus in spite of herself, who finds that her sex drive has been supernaturally augmented until even with the iron-hard will power that we've seen from her in previous episodes, she can't help herself, to be a very erotic subplot. And I understand what the author is doing: she's showing us how a person slides down the slippery slope of losing every last vestige of her humanity an inch at a time, not in spite of but because of the very best of intentions. But many fans of the early novels will find this one virtually unreadable; much of what they liked about the characters and the plots is gone. And I would not advise starting with this novel, without having read the early ones, unless all you're looking for is a VERY powerful, very well-written, very graphic erotic novel and don't much care if you're coming in in the middle of the story.

Published by Thriftbooks.com User , 14 years ago
I loved this book. I agree that the series has gone a bit down hill in the last couple books, but I think this one picked it back up a bit. Richard gets tiring. His unwillingness to accept himself and the way he leads his pack is annoying. His anger at Anita "feeding" off him is annoying. If he loves her as much as he says he does then he should want to be the one who satisfies her instead of forcing her to be with someone else. I think Micah is good for Anita and for the pard. He is strong and confident. He is willing to give Anita what she needs and doesn't whine about it later. She still hasn't gotten back to her job yet and I'm wondering when she's going to go back to raising the dead. I miss it. Still I found this book to be exciting. I don't think the sex scenes are boring, and there is a plot apart from the sex. So I disagree with most of the other reviewers.

Hamilton does it again

Published by Thriftbooks.com User , 20 years ago
After reading all of the other books in the Anita Blake series, I didn't think it was possible for Hamilton to add more spice to Anita's life. The triumvirate finally hits home and all hell breaks loose. I'll admit it isn't the best of the whole series, but it has that classic Anita Blake "feel" to it that draws me to reading the books over and over again. I hope that she writes another one, because I just can't get enough of Anita's twisted world.
Trustpilot
Copyright © 2022 Thriftbooks.com Terms of Use | Privacy Policy | Do Not Sell or Share My Personal Information | Accessibility Statement
ThriftBooks® and the ThriftBooks® logo are registered trademarks of Thrift Books Global, LLC