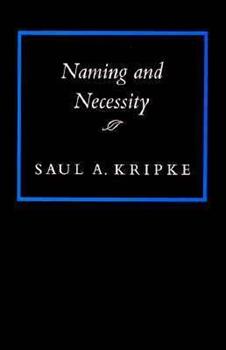 by Saul A. Kripke

If there is such a thing as essential reading in metaphysics or in philosophy of language, this is it. Ever since the publication of its original version, Naming and Necessity has had great and increasing influence. It redirected philosophical attention to neglected questions of natural and metaphysical necessity and to the connections between these and theories of reference, in particular of naming, and of identity. From a critique of the dominant...

Published by Thriftbooks.com User , 18 years ago
No, really. Kripke maintains a vigorously-argued and important thesis here: the surprising conclusion that statements involving identity (e.g., when calling something or someone out by name) involve a posteriori necessity. This is quite striking because many have assumed that necessity was somehow substantially correlative with the a priori: but that involves a confusion of metaphysical necessity with epistemological necessity. With that idea in place, Kripke goes on to apply (all too briefly, unfortunately) it in some extremely thought-provoking--nay, well-nigh mind-blowing--ideas about things like natural kinds and the mind-body problem. I just wish he had gone into way more detail on these fascinating issues than the three oral lectures transcribed on these 180 or so pages. If you're reading this review, you've either a) already read this and I don't have to tell you how unique and important it is, or b) maybe have just taken an undergraduate philosophy course that had some lectures on Kripke, and are thinking about checking out the primary literature yourself. If the latter, do so. You'll be enriched, and you might just be taken on a journey from which you'll never return. Philosophers are still, and undoubtedly will continue for some time, discussing the thesis of _Naming and Necessity_ and its implications for at least philosophy of language and metaphysics, and probably philosophy of mind and philosophy of science as well.

Analytic philosophy at its sexiest

Published by Thriftbooks.com User , 20 years ago
In 1970, Saul Kripke gave a series of three lectures at Princeton University. These lectures, subsequently published under the title _Naming and Necessity_, were quickly recognized as one of those rare events that turns the world of philosophy on its ear. Amazingly, Kripke was a mere 29 years old at the time and he delivered the lectures without any notes. This book reflects both the advantages and shortcomings of the spoken form: it is clear, engaging, and often witty, but it is also repetitive at times and frustratingly incomplete at others.It is perhaps fitting that Kripke delivered these lectures the same year that Bertrand Russell passed away, since their main target is the descriptivist theory of names associated with Russell. According to Russell - and to the reigning philosophical orthodoxy until 1970 - names are best analyzed as abbreviated definite descriptions, i.e. as unique sets of properties possessed by their bearers. However, Kripke argues that on this analysis, all such properties belong to their possessors necessarily - which is obviously false. For instance, if the name "Billy Strayhorn" just means "The composer of 'Take the "A" Train,'" then there is no possible world in which Billy Strayhorn did not compose the song. But this is false: Even if Billy Strayhorn had never written any songs, he would obviously still be Billy Strayhorn. What a puzzle!In place of descriptivism, Kripke proposes the theory of direct reference, according to which a name "rigidly designates" its referent in every possible world in which it exists. That is, a name is just a "tag" attached to its referent, with no descriptive content whatsoever. Kripke also proposes an alternative theory for how names are transmitted, the causal theory of names. For Kripke, the name I use for Strayhorn is "his" name in virtue of the fact that it is related, by means of some appropriate causal chain, to Strayhorn himself.Much of this was anticipated by other philosophers, though this often goes unnoticed. But Kripke developed his theory in a highly interesting way and put it to all sorts of surprising uses. His discussion of necessity and possibility almost single-handedly resurrected essentialism and gave a major impetus to contemporary modal metaphysics. He claims that names for natural kinds, such as "gold" and "tiger," rigidly designate their referents and argues that this establishes the existence of necessary a posteriori truths. He closes the book by offering an essentialist argument against the mind-body identity thesis.In short, Kripke has given philosophers much to talk about. Indeed, _Naming and Necessity_ has spawned a whole cottage industry of commentary. In my view, Kripke's project is flawed in many (though not all) respects. For instance, his causal theory is too vague to be of much use, and his argument that natural kind terms directly refer seems question-begging. Nonetheless, Kripke's book is extremely provocative, interesting, important, and even fun.

Published by Thriftbooks.com User , 22 years ago
If ever there was a time in history (and there have been many), when reality seems to be doubted and truth seems illusive, that time is now. With the reductio ad absurdum of post-modernism, Kripke restores the viability and stability of naive realism by fixing the referent in linguistic activity. It's a brilliant move, and one that has withstood the antagonists with suave and elegant argument. What Kripke has done is completely undermine the whole post-modernist project, which, at its core, attempts to deconstruct every semblance of reality. By using the very same tools, namely language, Kripke shows how the post-modernists have failed, and why they have.Intellectual skepticism is a healthy attitude for any critical thinker, but this very-well written argument on the necessity of naming that establishes and stabilizes our world around us is a must for all students of philosophy, and for all disiciplines that believe "differance" makes all the difference. Kripke shows that it does not.

One of the most important books of the 20th century

The most important philosophical book since, well, Frege

Published by Thriftbooks.com User , 23 years ago
The Millian semantics of proper names; the separation of semantics from the theory of how the semantics gets generated; the staunch insistence on the necessity of identity; the rehabilitation of "non-linguisitic" necessity"; the generation of the class of the necessary a posteriori from the semantics; the extension of the approach to proper names to the semantics of general terms; the consequences for metaphysics and the interpretation of science; the extension of _this_ to the mind-body problem; the tantalizing hints about fictional names; the skepticism about the possibility of conceptual analysis and the cosequent support for rationalist metaphysics; the huge quantity of material to be mined from footnotes -- all of these features and many more are radical and absolutely essential contributions of this book.
Trustpilot
Copyright © 2022 Thriftbooks.com Terms of Use | Privacy Policy | Do Not Sell My Personal Information | Cookie Preferences | Accessibility Statement
ThriftBooks® and the ThriftBooks® logo are registered trademarks of Thrift Books Global, LLC