Good book, did not receive the version I purchased

Published by Darcy , 4 months ago
Beware, you may not receive the edition you bought

Published by Thriftbooks.com User , 19 years ago
As an avid Stephen King and splatter-movie fan, I can still say that Naked Lunch is the most genuinely disturbing book I have ever read. Written under the influence of what was apparently a really bad heroin fix, Naked Lunch is the stuff of nightmares. I can't stress this point enough: Burroughs doesn't just cross boundaries of good taste, he utterly destroys them with sadistic glee. No stone is left unturned, no taboo left unbroken. That said, this is a pretty enjoyable read. The lack of a coherent story line may annoy some people, but it also shows how sporadically the author's hallucinations appear and disappear. The only main character seems to be heroin. This is the literary equivalent of the film Eraserhead; dark, morbid, sickening, and about as close to a nightmare as the conscious mind can get. And like Eraserhead, it's impossible to fully interpret or ignore once it's in view.

Published by Thriftbooks.com User , 20 years ago
There has been much written about Naked Lunch, so much that the basic facts can be stated from memory: written in Tangiers while the author was addicted to heroin, edited by Allen Ginsberg and Jack Kerouac, sold to Olympia Press in Paris and Grove Press in New York, made the author famous and ranked him with Henry Miller and the Marquis de Sade, suffered obscenity trials that ended literary censorship in America, filmed as a movie by David Cronenberg almost twenty five years after publication. And don't forget that Steely Dan got their name from this novel but they claim they never read it. That is the story of its life: few people have actually gotten through the whole book. It reads in fragments with inconsistent characters morphing, changing and altering identities. Dream, hallucination, reality and drug visions blend and merge and disperse. Scatalogical routines take coherant form and read like vaudville humor from a bathroom wall, then deteriorate into filthy fragments and irreverant and often disgusting descriptions of sado-masochistic sex acts. Everyone is a junkie, everyone is gay, everyone screws teenaged North African boys, everyone is insane, psychotic or diseased. Doctors kill their patients, police murder their suspects, drug addicts infect their marks with insect diseases and turn into centipedes during sex acts that threaten to nauseate the reader.So what does it all mean? What is the motivation or the reasoning behind it all. Burroughs was no fool and he had a strong moral intent all the way. He considered himself a reporter who has entered behind enemy lines, like a photojournalist who returns from Vietnam with pictures of napalmed babies. The title Naked Lunch evokes an image of someone being wised up to what they are eating. Burroughs is depicting the relationship between the junkie and the drug dealer to be a metaphor for all control systems, for all vampiric systems whether it be capital punishment, abuse of political power, police states, etc. By the time Burroughs wrote this novel he had suffered through decades of abuse at the hands of federal agents, narcotics police and the customs officials of all the third world borderlines that he crossed as he moved from New York to Texas to New Orleans to New Mexico to Mexico City to Tangiers, all the time running from the police, none the least of reasons being that he shot his wife through the head during a drunken game of William Tell (she put a glass on her head and challenged him to shoot it off -- he lost the challenge). Burroughs was a troubled junkie from a distinguished southern family, a Harvard student who studied archeology and linguistics, who studied medicine in Vienna, who went to New York to find work and wound up hooked on heroin. He took part in the birth of the Beat Generation in 1944 before setting off on his long tortured odyssey that led to more drug addiction, the death of his wife, and the bottom that he hit in Tangiers. He went there in the mi

Published by Thriftbooks.com User , 21 years ago
What else can I say, other than that this is "the" book that has brought William S. Burroughs the most fame(infamy?) and glory. Most people interested in Beat Literature choose Kerouac for insight, but I feel that Burroughs gets to the root of the Beatniks' most defining element: Drug use/abuse. His style is unrelenting. His prose harsh and ragged, not unlike himslef for some 15 odd years of his life in which he lived as a junky. I urge the reader to not read this book in sequence from beginning to end as a traditional novel. Instead, read a chapter or two at a time. Then, set it down and leave it alone for a day. The next day, return and continue reading. Each pargraph; each page is a message unto itself. Burroughs uses a rehab center in a place called Interzone, the character William Lee, and a sadistic orgy to help convey the over-all idea that the junky is a sad and tragic individual. But, what makes the junky so tragic is not his position in life. It is the sad fact that he put himself there in the first place. And, to spite himself, the junky's body must continue this act even though his mind says no. It is sad that this book has not been given the credit that it is due. Only at the end of his life did Mr. Burroughs begin to reap the rewards of his, and his comrades' work. As though he couldn't stand another minute in the world of the straight and narrow without a friend(Allen Ginsberg, the last Beat), he died after a life of extreme hardships and bittersweet success. Needless to say, this book sums up Burroughs' early life on the streets before any real intimations of success. It is not for the faint of heart, nor is it for those of you who prefer "popular" literature. It is for those of us who seek the truth, and read books about certain topics for an element of reality.

Naked Lunch Mentions in Our Blog 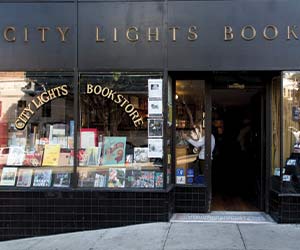 Lawrence Ferlinghetti died on February 22, 2021 at the age of one-hundred and one. In honor of Independent Bookstore Day, we’d like to pay tribute to him, the founder of the legendary City Lights Bookstore and City Lights Publishing.