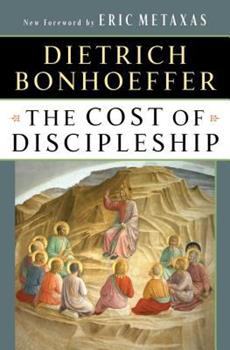 The Cost of Discipleship

NEW FOREWORD BY ERIC METAXAS Dietrich Bonhoeffer, one of the most important theologians of the twentieth century, illuminates the relationship between ourselves and the teachings of Jesus in this classic book on living as a Christian.

Published by Thriftbooks.com User , 17 years ago
"And even in our sleep pain that cannot forget falls drop by drop upon the heart, and in our own despair, against our will, comes wisdom to us by the awful grace of God." These words of Aeschylus echoed through me time and time again as I read Dietrich Bonhoeffer's "Cost of Discipleship". This was not an easy book to read. I do not think it was meant to be easy. Bonhoeffer was a person of limitless courage and faith. Born 1906 in Breslau, Germany to a prosperous family Bonhoeffer studied theology and completed his doctoral thesis when he was 21. He rose to some measure of fame in the 1930s by virtue of his writings and radio sermons. The rise of Adolph Hitler ran parallel to Bonhoeffer's own rise and it was opposition to the evils of Nazi-ism that compelled Bonhoeffer to put his words into actions, actions that cost him his life. As is set out in the introductory memoir in this edition, Bonhoeffer understood immediately that Hitler and his national socialist ideology represented a grave threat to Germans, to Christianity, and to western civilization. In a radio adress he gave in February, 1933 Bonhoeffer denounced Hitler and denounced his fellow Germans for accepting a corrupt and inhumane leader and system as its idol. Although Bonhoeffer spent a great deal of time living in England, safe from harm, he understood that he could not in good conscience "participate in the reconstruction of Christian life in Germany after the war if I do not share the trials of this time with my people." Bonhoeffer returned to Germany in 1939 to take up the struggle against Nazi-ism. He had to have known that his return would lead to his death but he knew he could not do otherwise. He was called and he obeyed that call without question. Bonhoeffer was arrested in 1943 after being caught assisting the escape of a number of Jews from Germany. On April 8, 1945, with Allied troops only days from liberating his prison, Bonhoeffer was executed on the orders of Hitler by the S.S. Black Guards. One cannot read the Cost of Discipleship without an acute understanding that his writings on sacrifice, on obedience, and on the cost of grace were mirrored by his actions. Cost of Discipleships consists of a series of set pieces on grace, justification, and obedience to God. This was a tough book to read for two reasons. First, I grew up in a tradition in which words like grace and justification were concepts best left for other denominations. I had to think about the meaning and context of those words in order to understand what he was saying. Second, Bonhoeffer does not speak to his reader in the manner of a kindly, easy-going grandfather. Rather, he speaks in the manner of the strict drill instructor in boot camp whose manner is designed to hit you in the face with your own (and his) inadequacies until you break. As you read further the purpose behind Bonhoeffer's harsh manner evidences itself. Like the drill instructor his purpose is not to be harsh for the sake

An excellent book on what it means to follow Christ

Published by Thriftbooks.com User , 20 years ago
I recently took a seminary class that dealt with traditions in Christian devotion, and one of the assignments was to pick a classic Christian book and do a report on it. I chose "Cost of Discipleship" because I had wanted to read it for some time. Much has been said about the book's power, and I desired to experience that for myself. After finishing it, I can see why "Cost of Discipleship" has challenged so many in their walk with Christ.The book's major theme centers on what it really means to be a disciple of Christ. This is summed up by Bonhoeffer's statement that Christ calls us to "come and die." Christ wants all of us - nothing is to be held back. One is either a disciple of Christ, or they are not. There is no middle ground. The true disciple is dying to his or her life as a whole, and their old life is being replaced with the life of Christ."Cost of Discipleship" is soaked in Scripture, and that is one of its main strengths. This is not surprising, since reading the Bible actually contributed to Bonhoeffer's personal conversion and commitment to Christ. Bonhoeffer constantly refers to Biblical passages to make his points, and he does not resort to storytelling or even personal anecdotes. One can sense his deep love for the Bible and for Christ throughout the book. Another strength is Bonhoeffer's conveyance of how imperative commitment to Christ really is. Bonhoeffer was an early foe of Adolph Hitler, and this book was published while he was being persecuted by the Nazis. Thererfore, he wrote as one who has stood for Christ in tough times, and he knew that Christ is one's only hope. Indeed, he eventually gave his life for his faith, and by all Christian and secular accounts glorified God to the very end. Finally, even though "Cost of Discipleship" was published in 1937, every page in this book counters the "easy believism" and license that tempt and seduce many Christians today. Bonhoeffer attacks "cheap grace" and demands a steadfast, deep loyalty to Christ. He illustrates the power and holiness of God in a way that indicates the necessity of a healthy, reverent fear towards God. However, I did have a couple of minor issues with the book. It is somewhat densely written, and therefore may be daunting to the average layreader. Bonhoeffer was a highly educated theologian, and it shows in his writing style. In addition, Bonhoeffer tends to neglect grace in favor of emphasizing absolute holiness and commitment. His moralistic leanings have the danger of encouraging legalism and asceticism if a reader is inclined toward those pitfalls. I'm sure this was not his intent, since it was Bonhoeffer's genuine love for Christ that motivated his passion and perseverance. But this may be a situation where a person takes for granted a truth they have worked through and internalized, and therefore they fail to communicate it to others because it is so integral to them. I think Bonhoeffer loved God so deeply, with all his being, th

Read this book over and over again until the day you die....

Published by Thriftbooks.com User , 23 years ago
HEAVY DUTY. Sadly, Bonhoeffer describes a Christian life that is totally foreign to me in the depth of that life's total devotion to the person of Jesus Christ. I am mesmerized by his compelling scholarship, and my spirit is in total agreement with his conclusions. I have never read such an in-depth, personalized treatise on the Sermon on the Mount. This book is a new addition to the few titles I have on my "read this book over and over again until the day you die" bookshelf. TRUE MEAT that will feed you and nourish you over and over again. An eye-opening, siren call to my soul for it's complete capitulation and abandonment to my Maker.

To encourage and entreat others to experience Bonhoeffer

Published by Thriftbooks.com User , 25 years ago
This is an intense work,though not as intense as some of Dietrich's other works.This book lives up to it's title in every way,he pulls no punches as he relates the scriptures to real life and expounds upon the teachings of Jesus.He plainly teaches that there is a cost to following in the footsteps of Christ,just as Christ himself taught that Christ must be first and there is no compromise.This work is so intense,even Dietrich himself later in life,wondered if he was too blunt.Definitely not for those who enjoy sugar coated watered down messages,but if you've got the guts to read it,it will change your life!

Be warned -- Makes good on its title

Published by Thriftbooks.com User , 25 years ago
You want to read about the cost of discipleship? Bonhoeffer gives it to you! Discipleship is a hard pill to swallow, and Bonhoeffer doesn't try to sugar coat it for you. He wants you to know exactly how bitter and choking it will be. Still interested? This caution, then -- the more you read about the cost of discipleship, THE MORE YOU WILL WANT TO PAY. It's a mystery. Read at your own risk
Trustpilot
Copyright © 2022 Thriftbooks.com Terms of Use | Privacy Policy | Do Not Sell or Share My Personal Information | Accessibility Statement
ThriftBooks® and the ThriftBooks® logo are registered trademarks of Thrift Books Global, LLC