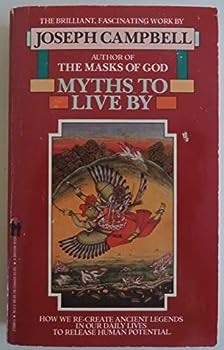 Myths to Live by

What is a properly functioning mythology and what are its functions? Can we use myths to help relieve our modern anxiety, or do they help foster it? In Myths to Live by, Joseph Campbell explores the enduring power of the universal myths that influence our lives daily and examines the myth-making process from the primitive past to the immediate present, retuning always to the source from which all mythology springs: the creative imagination. Campbell...

Our own, and the world's, divine ground

Published by Thriftbooks.com User , 17 years ago
I am glad that I finally got around to reading this collection of Campbell's lectures delivered between 1958 and 1971. Since they deal with eternal subject matter there is little chance of them being "dated." The common theme running through them all is the deep power of myth on the inner, spiritual lives of human beings throughout the ages. This includes our own age, whether we personally want to admit or recognize it. The Lectures include: 1) The Impact of Science on Myth (1961), 2) The Emergence of Mankind (1966), 3) The Importance of Rites (1964), 4) The Separation of East and West (1961), 5) The Confrontation of East and West in Religion (1970) 6) The Inspiration of Oriental Art (1958), 7) Zen (1969), 8) The Mythology of Love (1967), 9) Mythologies of War and Peace (1967), 10) Schizophrenia- the Inward Journey (1970), 11) The Moon Walk- The Outer Journey (1970), 12) Envoy: No More Horizons (1971), The reader will recognize much of the subject matter from the later talks with Bill Moyers in the "Power of Myth" series. All in all there is enough material covered to make this an excellent introduction to myth, true spirituality, and depth psychology. One of the topics that stuck with me was the fundamental difference in the nature of religion in the East, the Near East, and the West. Traditional Eastern societies were seen as governed by one great cosmic law through which all members were seen to draw their purpose, their worth, their meaning. God was in all things and the divine spark was in all individuals. Union with the divine was possible to those that transcended their ego. In the Near-East human beings (including the King) were seen as the groveling "tenant-farmers" of God. Men were the slaves of the Gods and could only beg and sacrifice to obtain boons. Man was in no way a part of God- matter and spirit were artificially split (mythic dissociation.) Finally, there was the Greek model- mankind as the rivals and competitors of the Gods. The Greek had turned ego into God, laying the foundation for the total denial of the very existence of spirit. That is, except for the initiates of the Mysteries.... There is a section of reference notes citing sources in the back of the book, as well as, a full index for quick reference.

Published by Thriftbooks.com User , 20 years ago
MYTHS TO LIVE BY consists of a dozen essays/talks Joseph Campbell prepared between 1961 and 1971. He described the period as a "new age" where "..we are...participating in one of the very greatest leaps of the human spirit to a knowledge not only of outside nature but also of our own deep inward mystery." At the time he wrote these essays, Campbell was a professor on a campus, surrounded by young people whom he found hard to understand at times. For example, in his essay "The Moon Walk--the Outward Journey" he relates his own feelings of awe on viewing the Apollo moon landing and contrasts them with the reaction of a student who wrote "So What" on a photo of the moon landing posted on a campus bulletin board. In another essay "Schizophrenia--the Inward Journey" he contrasts the use of mind-altering drugs by shamans and psychotics (including the LSD induced version) as the difference between divers and non-swimmers in "the waters of the unviersal archetypes of mythology." I find Campbell's essays are very relevant, 30 years later. The most obvious example is "Mythologies of War and Peace" which addresses the underlying belief systems of participants in the Mideast crises. Campbell says the cruel fact is that "killing is the precondition of all living whatsoever: life lives on life, eats life, and would not otherwise exist...it is the nations, tribes, and peoples bred to mythologies of war that have survived to communicate their life-supporting mythic lore to descendents." He suggests that "we" in the West "have been bred to one of the most brutal war mythologies of all time." He then goes on to cite Deuteronomy and Isaiah and follows with excerpts from the Koran such as Sura 2, verse 216.."Fighting is prescribed for you." Campbell does not condemn myths nor does he say myths are not literally true. He suggests creation myths and myths about love and war and peace contain the essence of the truth. Myths are to humans what kangaroo pouches are to baby kangaroos, they provide a "womb with a view." Being born simply isn't enough. We need myths to help us organize and guide our lives. However, our current myths arose in another era and were shaped by tribal mentalities that sustain the notion of GROUP differences. We need new myths for the journey of life.

Eloquent exposition of the Universal Myth

Published by Thriftbooks.com User , 21 years ago
"Myths to Live By" is one of those books which makes me wish I did not have to assign a star rating. For while it is, as the title of this review suggests, a very eloquent and powerful exposition of the Myth that forms the bones of our Psyche, Campbell clearly has some predjudices that make some of his points difficult to see. First, however, I shall focus on the positve aspects of the work. Campbell begins his book with a story about the conflict between a myth (in this case the story of Adam and Eve) and the facts discovered by science. The little anecdote serves to present the key thesis of the book: that our old religious idea that myths are literally true is no longer servicable, and that we must now, in an age where the world is coming together in ways unprecendented, seek the pattern that underlies all myths and discover our oneness as a species. Campbell explains why myth and ritual are neccesary in concrete, psycholgical terms. If there are no myths, individuals will become alienated from their society, since myths contain affect images that speak to not the rational mind, but the psyche. His argument is essensially Jungian in tone. Through a comparitive look at the worlds "major" religions, he shows how all myths are variations on the theme of self discovery and rebirth as a person engaged with the Universe and society. All that is wonderful. What is not wonderful, however, is the vaugley reactionary tone underlying some of the books passages. Campbell seems to share the imperialist view that all of human history naturally culminates in modern, technological, Western Civilization. He dismisses the youth movement of the time he wrote this book (the sixties to early seventies) as folly. The cultural contribution of "Beat" poets such as Ginsberg an Kerouak is completley ignored. In fact, the "Beats" are never even mentioned when Campbell throws out an all encompassing statement like "we have no artists...of such power today". Equally troubling is the statement that "all life is suffering, all societies are opressive, and we just have to learn to live with it". Now, while it may be true that life is sorrowful and that social orders have, throughout history, tended to be unjust, it does not follow that we have to accept the latter fact with the same passivity as the former. As Campbell points out, we make the choices that determine the direction of our society. If everyone, or a strong majority at least, were able to come to the understanding of universal Myth and Divinity, the opression that exists today would decrease, if not dissapear. The book comes to a climax with an expose of the mythic dimensions of the first moon walk. The chapter illustrates how we are indeed one planet and one species. Juxtoposed with "all societies are opressive, and we just have to live with it" however, the chapter's beauty becomes terror. In this light, the chapter is a prophecy of slavery, not oneness. Still, this is a very impor

The best of all Joseph Campbells books

Published by Thriftbooks.com User , 24 years ago
I read this book while on a cruise, and found myself spending a lot of time reading. Of all his works, this is the most down to earth. The others are too 'professorial' as if intended to impress, while this one simply lays it on the line. Psychology and mythology relate to each other very nicely, as Mr. Campbell realized when asked to share his concepts with those of a Psychologist. Jung was a favorite because of his concept of Universal Mind. Contrary to what might be thought, the book is not anti-religious, but it does explode particular Christian beliefs. Rather, it reveals the Universal meaning of 'life' which each community resolves in its own way, frequently as not, in similar ways. Boil away the variety of customs, etc.,and you have the essence of Joseph Campbell's work, and a better appreciation of man's universal mind.

Published by Thriftbooks.com User , 24 years ago
Campbell selected and compiled a selection of a talks on mythology from a series of discussions that he delivered between 1958 and 1971. There is an academic quality about his style, but this will not be a barrier to most people who enjoying thinking and reflecting about what humans share in beliefs. The ancient mythic themes come alive as he weaves the observations of 20th Century everyday living with flashbacks of times ago. He storytells and teaches using 13 broad topics such as love, the beginnings of Humankind, War and Peace, schizophrenia, and the moon walk. Campbell's text reads as if he is in your home; quite possibly having a glass of wine; discussing love relationships in the theater of Life; balancing the ideas of such people as St. Paul, Shaw, Sarte, Persian poets, Buddha, and Lord Krishna. He is at his strongest in his chapters on journeys: inward and outward. A word of caution: Your mind's ear will be listening to a Master Teacher. If you liked Bill Moyer's interview with Campbell, you will appreciate Campbell's theme choices and style. His art of making sense of human potential and challenging its boundaries is a stimulating reflective exercise.
Trustpilot
Copyright © 2022 Thriftbooks.com Terms of Use | Privacy Policy | Do Not Sell My Personal Information | Cookie Preferences | Accessibility Statement
ThriftBooks® and the ThriftBooks® logo are registered trademarks of Thrift Books Global, LLC