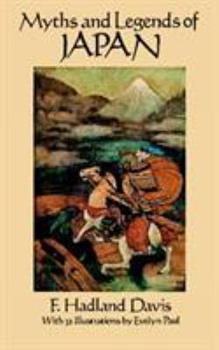 Myths and Legends of Japan

The most popular myths and legends of Japanese culture are charmingly retold in English in this handsomely illustrated book. Here are myths of gods, heroes and warriors; legends of Buddha, and of the goddess Benten and the god Daikoku; tales of the sea and of Mount Fuji; accounts of superstitions and supernatural beings; observations on the spiritual properties of fans, flowers, dolls and butterflies and much more. The collection begins with the early...

Published by Thriftbooks.com User , 13 years ago
This is a good if somewhat dated compilation of Japanese myths & legends. Most of it was new to me, although there were a few that I had run across in my reading before. Mr. Hadland wrote well, although one can detect some condescenion in the text. The stories illuminate the Japanese character in a way that other cultural artifacts do not. I recommend this book to anyone with a serious interest in Japanese culture.

Tales of Olde from a Hidden Country

Published by Thriftbooks.com User , 15 years ago
When this book was written, in 1913, Japan was still a country shrouded in mystery. Mathew Perry and his Black Ships had forced the treaty in 1858, an event that was still very much in living memory. Lafcadio Hearn had published his books on ghostly Japan only a few years earlier, and information was slowly pouring in to a hungry public. F. Hadland Davis pulled from Hearn's works, from Basil Chamberlain's "Things Japanese," from various translations of the Kojiki and the Nihongi, and from all of the new research available to create a single volume detailing the "Myths and Legends of Japan." He did an amazing job, and this is really an astoundingly comprehensive volume, with creation myths, magical creatures, ghost stories, Buddhist lessons and everything else under heaven. Davis has categorized the stories in an interesting and romantic way, such as "Concerning Tea" and "Dolls and Butterflies." All 31 categories have about four or five stories apiece, giving you an idea of how many gems are in the book. The writing style of the book is very old fashioned, and people unaccustomed to a more scholarly style might find it a bit thick. Hadland often sumarizes the tales, rather than giving them a storytelling flair. The focus of the book is educational over entertaiment, introducing the myths and legends of an unknown country to his readers. Also included is a glossary and index, to help in the absorbtion of the many, many tales. Writing aside, the biggest shame of this edition is the illustrations. While lovely, they have been reproduced in black and white instead of the original color plates. I know it keeps the costs down on a book almost 100 years old, but the original images must have been something to see!

I wish I had found this sooner!

Published by Thriftbooks.com User , 18 years ago
This book is exactly what I had been looking for to quench my thirst for knowledge of Japanese mythology. Each of the 31 chapters covers a different subject and does so very well. My favorite chapters were: V. Fox Legends, IX. Legends of Mount Fuji, XXII. Animal Legends, XXIII. Bird and Insect Legends, XXVII. Legends of the Sea, XXVIII. Superstitions, and XXIX. Supernatural Beings. I highly recommend this to the mythology buff as well as the casual reader looking for something interesting to read.

Published by Thriftbooks.com User , 20 years ago
Of course I am not an expert on "Myths and Legends of Japan", so I cannot judge the accuracy of the book, but nevertheless I do think that this is an absolutely fantastic read. First published in 1913, and thanks to one of my favourite publishing companies, Dover, made available again in 1992. It's not just a collection of (translated) stories of myths and legends in Japan, the author also gives some background information and further explanations.The range of topics covered is huge: from the Gods to heroes and warriors to foxes to legends in Japanese art to the sacred Mount Fuji to flowers and gardens, mirrors, insects, fans, thunder, superstitions, supernatural beings, Kintaro... to give you just a few examples!I must admit that at first I found it difficult to get into this book, but after about 30 pages I was hooked and had a hard time putting it down. Some of the stories are very moving, some breath-taking, others just sweet... Since common myths and legends of a people do say quite a bit about it, one can only be blown-away by just what a nation Japan must be!

Myths and Legends of Japan Review

Published by Thriftbooks.com User , 21 years ago
I found this book to be a well of information. I loved this book tremendously. I originally used it for a project on myths and legends in japan but as I discovered more about this topic (which this book had helped to release) I became more and more fascinated with the subject. This book revealed many myths and legends in depth than you can find in or on many resources (especially over the internet). I highly recommend this book for the readers enjoyment and information.
Copyright © 2022 Thriftbooks.com Terms of Use | Privacy Policy | Do Not Sell My Personal Information | Accessibility Statement
ThriftBooks® and the ThriftBooks® logo are registered trademarks of Thrift Books Global, LLC