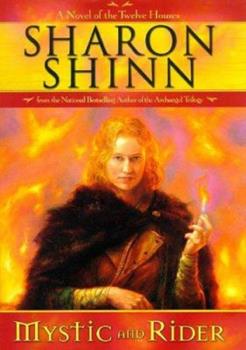 The inventive (Library Journal) national bestselling author of the Samaria novels returns with the first book in a stunning new fantasy saga.

Daughter of the Bright Mother

Published by Thriftbooks.com User , 14 years ago
Mystic and Rider (2005) is the first Fantasy novel in The Twelve Houses series. Gillengaria is ruled by a king, but the Marlords of the Twelve Houses control most of the land and commerce. If the king dies without heirs, a new king will be chosen from the Twelve Houses. Mystics in Gillengaria have various talents and are often distrusted and even hated due to these unusual abilities. Senneth is a mystic, but different from all others whom she knows. She can control fire, bathing herself in it if she wishes, a daughter of the sun goddess. Senneth is sometimes called the King's Mystic since she started doing missions for him. This time she has other mystics with her, Kirra and Donnal, who are shapeshifters, and Cammon, who is a sensitive. She is also accompanied by two King's Riders, who do not trust her at first. In this novel, Senneth's party takes a side excursion into Dormas to free Cammon from indenture. His family had been overseas when his father died. He and his mother took ship to return to Gillengaria, but she died enroute. The ship's captain sold him to a tavern keeper to pay for their passage. Once freed and escorted safely away from the town, Senneth starts teaching Cammon ways to use his mystical abilities. He begins to notice that he can perceive things without the use of his normal senses. Although Senneth has duties to perform at the present, she decides to introduce Cammon to some of her sensitive friends as soon as possible. In a small town, the group discovers a strange phenomenon. Something is killing small animals and even a child and a passed out drunk. Senneth recognizes something familiar in the situation. After gathering more information, she decides that the killer is a raelynx, a wild cat from the Lirrenlands. Senneth sets out at night and lures the raelynx to her and then controls its mind and body. Despite a few protests, Senneth takes the raelynx with them on their mission, much like she included Cammon in the group. In this story, Senneth is the nominal leader of the group, but encourages the others to contribute their ideas. Although it is her mission, Tayse is the actual leader for daily affairs and defensive decisions. In a sense, Senneth is the strategist and Tayse is the tactician. Senneth and Tayse have to work together rather frequently and closely. Since she is not a King's Rider, Tayse doesn't trust her, but he beginning to have less distrust. Justin, the other Rider, also begins to respect her ability and judgment. The group finds numerous indications of hatred toward mystics, from social disapproval to outright murder. The further south they travel, the worst the situation looks. They begin to hear more and more about the Daughters of the Pale Mother and their preaching against mystics. They also hear about the soldiers following the Pale Mother. Moreover, the southern Houses are beginning to expand their household troops. Senneth and Kirra occasionally meet with the Marlo

Start of a new fantasy series

Published by Thriftbooks.com User , 15 years ago
This is the first volume of a new Shinn fantasy series. Typical of her work, lots of characterization, strong female characters, and the hero is NOT an all powerful, all knowing superhero, they (she) is all together human, with flaws. Story takes place in a fantasy world, where magic can be performed by a small minority (called Mystics), with a growing movement of an "anti-magic" religous order. Very roughly kinda of Kurtz Deryni world, but less development on history and culture and a much greater dependance development of individual characters.

This is the Beginning of a Beautiful Fellowship...

Published by Thriftbooks.com User , 15 years ago
A party of very disparate people are roaming the kingdom on a mission for the King. Two of them are King's Riders, legendary warriors totally loyal to the King, and three are Mystics, magic users who are tolerated in the capital, but are looked at with suspicion by many, particularly in the southern kingdom, where the party is finding rumors of discontent and possible civil war and treachery. The leader of the party is Senneth, a woman with a mysterious past who is a powerful Mystic who can control fire and work some other kinds of magic, and who has the ear of the King, much to the consternation of the two distrustful Riders. With her is Kirra, a beautiful young noblewoman, who is also a Mystic, but protected by her powerful father who leads one of the Twelve Houses of the Kingdom. She is a shapeshifter, and so is the fifth person, a male servant/guard/companion, who is also a shape-changer. Despite their clashing personalities, they have a similar goal--to serve the king--and they work surprisingly well together, at the start, picking up a sixth member--a boy who is a Mystic. Senneth seems to have a heart for gathering strays, so he joins their group, saved from a life of servitude and danger as a lone Mystic. As their adventures continue, they gradually bond--very gradually! But that's part of the fun. They face a powerful noblewoman who has founded a fanatical religious order that is intent on wiping out Mystics, and her brother, a treacherous nobleman who blatantly schemes to take the crown. Along the way the party gets to know each other... even Senneth gradually has to give up her deepest secrets. I enjoyed seeing this odd party clash and bond. Their adventures weren't earth-shatteringly unique, but the world and the magic is interesting and looks to be a great place for more adventures that I'll happily follow.

Published by Thriftbooks.com User , 15 years ago
The first novel in the series of the Twelve Houses, this is the story of a scouting party who has been sent out into the towns and villages to test the feelings in regards to Mystics. The king needs to know the truth, but he understands the dangers involved, so he sends two of his Riders to accompany the motley group of mystics on their journey. Feelings run high, and trust isn't easily given. Senneth is a mystery to many of the players in the group, but she is the one whom the king charged with the journey, so the Riders, Justin and Tayse, must put aside their feelings of distrust in mystics to complete their charge. As the group travels on, adding members to their already unusual group, situations cause some re-evaluations and self-reflection of personal feelings. This is a great story, with a lot of players but not too many, well-written. It was a difficult book to put down. I look forward to the next - The Thirteenth House.

Published by Thriftbooks.com User , 16 years ago
In "Mystic and Rider," Sharon Shinn introduces her readers to a new fantasy series. This book covers the journey of a rather strained party of travelers, four magically-gifted "mystics" and two King's riders who are assigned to protect them, as they move through the kingdom, trying to discern if rebellion or other issues are surfacing. The book is definitely predictable. I had figured out several key plot devices well before the major characters did. It is also derivative: other authors have covered the "hate and fear magicians" topic before. However, I am still giving it five stars, because the plot is enjoyable, the characters are believable and interesting, and the world-building is great. I especially enjoyed that both Tayse and Sennath are very strong, but also very vulnerable at the same time. The villains are dangerous, irritating, and fanatical, but very believable. I also enjoyed watching the gradual evolution of the characters and their relationships with each another. I'm definitely looking forward to the next installment.
Copyright © 2020 Thriftbooks.com Terms of Use | Privacy Policy | Do Not Sell My Personal Information | Accessibility Statement
ThriftBooks® and the ThriftBooks® logo are registered trademarks of Thrift Books Global, LLC