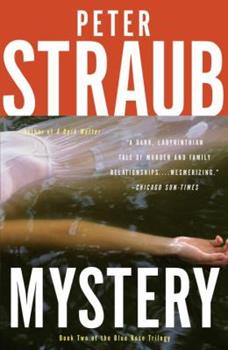 MYSTERY. Tom Pasmore, ten years old, survives a near fatal accident. During his long recovery, he becomes obsessed with an unsolved murder and finds he has clues to solving it that he shouldn't. Lamont von Heilitz has spent his life solving mysteries, until he wanted to know nothing more of the terror of life and the horror of death. When a new murder disrupts their world of wealth, power, and pleasure, the two must form an unlikely partnership to...

Published by Thriftbooks.com User , 13 years ago
In my childhood -- when summers lasted forever -- I enjoyed reading some books annually at our isolated northern cottage. Now retired, I still do. Straub's "Mystery" is a good read. It might not rank up there with the so-called "classics" I studied in universities, but I still re-read it because it's a fascinating story about the mysteries in dying, loving, hating, growing up, and living in multiple worlds. It focuses on hope. Definitely not a fantasy or ghost story. The AUDIO version, unfortunately, left out a lot of the "meat" that makes the book a good read, and is not worth listening to more than once.

Published by Thriftbooks.com User , 16 years ago
This is such an unusual book, and completely addictive after I got the hang of his style. It started off a trifle slowly for me, but became so enjoyable in the character development and story that I went to bed earlier and earlier to read more before drifting off. Art imitating life, things happened that he didn't neatly tie up and explain within two pages, either for the characters or for us. It's mouth-watering as you move among the richly described socio-economic strata, becoming aware of the depths and shallows of the characters and locales - nothing really single-dimension. True to life, his characters may be strong in some suit, but weak in others. I really enjoyed that Straub doesn't "tell us". He lets us tag along and observe, making our own judgements, as his main character experiences his love, pain, confusion, longings. Don't think from my description that it's purely an emotional discovery type of book. Plenty of action that's valid (as opposed to gratuitous action scenes), some explained, some not till later. WHOPPING GREAT READ. Take your time with it and savor it, as you'll be sad to put it down for the last time.

a truly beautiful and amazing story

Published by Thriftbooks.com User , 19 years ago
Tom's childhood was far from perfect, but he was one of the lucky few who had a magical life. If you are one of those of us who feel that our childhoods were some how magical, you will love this book. Stunningly mature, beautifully written, and shockingly surprising, you will want to read this over and over. I read it until the thing fell apart.Tom grows up on an island where society is what life centers around. When his eyes become opened after a life threatening accident, he is plunged head first into one of the most startingly mysteries ever known, including a mystery of his own life.This is one of my all-time favorite books. Do yourself a favor and read this. It will stay with you forever.

One of the richest and most haunting stories ever written

Published by Thriftbooks.com User , 20 years ago
The "hook" with Peter Straub's novel was that a popular horror author has written a book titled "mystery". Had the author changed genres? This was what I wondered in High School when I first picked up the book. I had read Ghost Story (excellent) by Mr. Straub and was intrigued that he would write a book titled "mystery" with no apparent supernatural creatrues or doings found in the pages. But what authors like Peter Straub remind us of is that horror and fear and dread are all psychological in essence and that you can be scared and affected by a book that has no ghosts or no monsters. "Mystery" stands as a perfect novel in my eyes. While Ghost Story may be Straub's best "horror" novel, and one of the best ever I might add, this novel achieves greatness amongst ANY class of fiction. The characters are wonderful. Straub not only makes you love them, namely Tom Pasmore the antagonist and his mentor Lamont Von Heilitz, but he makes you be there WITH them. You long to learn the mysteries of the past. You long to learn the ways of a sleuth. I was right alongside Tom Pasmore in this story. I felt for him, I grieved with him, and I detected with him. Simple as that. The plot sounds simple but is so much more complex. Tom Pasmore, a young boy who is nearly killed in the beginning of the novel, takes up the art of mystery solving. He is fueled by a wonderful, reclusive neighbor who was once a "detective" himself. Tom then applies his knowledge to try and find a killer in the present and ultimately in the past. Mystery is about a young man's journey into adulthood and the hard truths about life. It is about realizing that secrets and untold truths swirl around us every day and that sometimes finding them out can be satisfying and other times dreadful. I left this story with a sadness in my heart. I simply didn;t want to leave the story. Mystery has suspense. Mystery has heartache. Mystery has, of course, a mystery. But what Mystery has most of is heart. It is simply one of the richest and most haunting stories you will ever read. One final note in case you didn't know. Mystery is the middle book of a trilogy that beings with Koko and ends with The Throat. You don't have to read Koko to read Mystery, and vice versa. But you DO have to read them both before reading The Throat. One more thing... The Throat is almost as good as Mystery. Almost.
Copyright © 2020 Thriftbooks.com Terms of Use | Privacy Policy | Do Not Sell My Personal Information | Accessibility Statement
ThriftBooks® and the ThriftBooks® logo are registered trademarks of Thrift Books Global, LLC