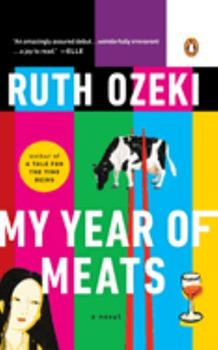 My Year of Meats

A cross-cultural tale of two women brought together by the intersections of television and industrial agriculture, fertility and motherhood, life and love--the breakout hit by the celebrated author of A Tale for the Time Being Ruth Ozeki's mesmerizing debut novel has captivated readers and reviewers worldwide. When documentarian Jane Takagi-Little finally lands a job producing a Japanese television show that just happens to be sponsored by an American...

Much more than just meat

Published by Thriftbooks.com User , 20 years ago
I, too, greatly enjoyed My Year of Meats. Though the "meat" side of the novel was impossible to miss -- it is, obviously, crucial to the plot -- I found that it had very little to do with what made the book so enjoyable. I'd seen the book around in bookstores for years, but never bought it because I thought that I had the meat industry covered, having read Upton Sinclair's The Jungle. Don't make the same mistake I made! My Year of Meats is SO much more. Jane Takagi-Little is a documentarian who accepts an offer to make a series of half-hour shows for Japanese television entitled "My American Wife!" and sponsored by the American beef industry. She takes the opportunity to do more than simply showcase beef, repeatedly breaking orders from Japan and filming the most unusual and intriguing "American Wives" she can find -- a couple in Louisiana who have adopted Asian children, and even vegeterian lesbians! In the process, Jane learns a lot about the beef industry, and begins to plan to subversively expose the shocking details meat-eaters would rather not know. Unlike some other reviewers, I didn't find this part of the novel to be excessively preachy; it fit in with the plot nicely. Along the way, the reader also learns about Jane's private life and what makes her tick, fleshing out her character nicely.On the other side of the globe we have Akiko Ueno, the wife of one of Jane's bosses. Through her eyes the reader is able to learn much about the Japanese culture. Akiko is abused by her husband, who she was set up with by her boss and married out of obedience. Eventually the lives of Jane and Akiko intertwine with fascinating end to the novel. Set to exquisite sections of The Pillow Book, My Year of Meats is a captivating read.

Published by Thriftbooks.com User , 21 years ago
Did you ever read "The Jungle" by Upton Sinclair when you were in high school? I did, and for about a week afterwards my entire high school class were vegetarians. The descriptions of the meat packing industry at the turn of the century completely disgusted the majority of us, but eventually we went back to hamburgers on the assumption that "it was 90 years ago, it's much better now!"I think I may start buying organic meats again, because this book gave me the same reaction. Like the main character, Jane, discovering the practices of the 20th century meat industry -- even with the FDA in charge -- has made me think again about what I'm eating.Jane gets a job -- a dream job as she has no other and needs money -- to film a weekly series for Japanese television called "My American Wife." The show is to showcase different beef-based recipes in order to promote beef consumption in Japan. Jane meets many interesting families (think vegetarian lesbians -- these two were actually my favorite characters), eats some rather inspired beef-based dishes (beef fudge, for instance), and learns that there is more to the cow than just the cow.What Jane ends up discovering is that not much has changed since Sinclair wrote The Jungle. Chemicals (such as DES, which really did cause a lot of health problems for mothers and infants in the 50s) and inhumane practices (you'll never believe what some of these cows are fed for dinner each night) are still in effect, and these result in meat that may not be as good for you as the FDA would like you to believe. The meat industry is still a market where more is better, no matter how you have to get it. Is it any wonder that people are getting sick?Vegetarians will love this book. They will point to it and say, "Yes! This proves my point!" Japanese will nod knowingly and take another bite of sushi. Cowherders will cry out "But that's not the way we do it!" And the media will say, "We only show what the public wants to see." This book opens your eyes and makes you wonder exactly how much of this is true and how much is from the imagination of Ruth Ozeki. You will also be unable to watch the evening newscast without wondering what they aren't telling you. I think I'll stick to salad for a while.

Published by Thriftbooks.com User , 21 years ago
I have not read Japanese modern novels lately. Why? Probably because I feel they are written only for Japanese readers. Ah, Japanese readers, they seem happy when they are freed from the real world; the history of WWII, their discrimination (against Koreans, the Chinese, Okinawaite, handicapped people, old people, gay, etc.), their depression after the high economic growth... On the other hand, I've read brilliant American novels in 90's whose protagonists are Japanese or Japanese-Americans; Sizuko's Daughter (Kyoko Mori), Snow Falling on Cedars (David Guterson), Audrey Hepburn's Neck (Alan Brown), etc. And now, Ruth L. Ozeki's My years of Meats! It covers several modern subjects; chemical poisoning (against human beings and beef cattle), racial prejudice and love. The story is simple. Through Japanese TV series, 'My American Wife!,' whose sponsor is a big American meat company, Jane (director; Asian-American) and Akiko (audience; Japanese housewife) get at the truth of life at last. Its simple situation succeeds in getting reality. My years of Meats is not only entertaining but also has a keen eye for truth. From Tokyo.

Published by Thriftbooks.com User , 21 years ago
A delightful part of reading certain good books is realizing that you've fallen in love with the protagonist. The experience is heightened if you come to this affection a little reluctantly and with distinct misgivings. But best of all is closing in on the conclusion thoroughly hooked, mincing along that classic balance between comedy and tragedy. "My," you suddenly think. "She's really not taking good care of herself. Say, this could end very badly. Oh, golly, not that..." So it is with Jane Takagi-Little, the hero of Ruth Ozeki's "My Year of Meats." She first appears as an out-of-work (hungry) documentarian who gets an offer to work on a Japanese TV series to be called "My American Wife!" The series pretends to be about America and Americans, but really, "Meat is the message." Every week, a family of "real" Americans will share their life-and their favorite meat recipe. A council of beef producers (BEEF-EX) wants to sell Japanese housewives more meat. I was doubtful, but Jane needed to pay the rent. She bit. Soon we're on the road with Jane and the meat show. The Japanese production crew needs her language and negotiating abilities to make TV programs with ordinary people. Right away we sense the exploitative flavor of making programs that are more interested in what people eat than who they are. But Jane is interested in people. Yet, she's definitely a edgy character-six androgynous feet tall with streaks of purple hair. First doubtful thing she does is take up with a vaguely menacing guy that she met through phone sex. Hmmm. Just when we've had about enough of Jane for awhile, the narrative POV shifts to Akiko Ueno, a shy woman who watches My American Wife! at home in Japan and loves the show and really wants to eat more meat. Not coincidentally, Akiko is married to the sponsor's representative. And this is just the beginning of the complications. Structurally, this is a thoroughly modern text. Instead of a straight narrative line, it weaves together first and third person voices, classical Japanese literature and, of course, meat recipes. But it's never heavy; in fact, it's increasingly hilarious. Some of the most riotous series are exchanges of faxes and emails between the producers and Jane. The slightly mangled syntax of Japanese English is letter perfect. And Jane's obsequious, double-edged replies are masterful-particularly for anyone who's ever had to write such a memo to ones higher-ups. Increasingly, Jane comes into conflict with her producers-ultimately with BEEF-EX itself-and the supposedly fawning memo is her first line of attack. Why? Because Jane really does care. She finds beauty and nobility in the American heartland and she wants to tell the truth about it-even if that means making meat something of a side dish. And she has the artistic sensibilities to do a great job. First there's the Cajun couple who happen to have adopted 12 orphans of various race

This book will grab you, hold you and jab you in the gut.

Published by Thriftbooks.com User , 23 years ago
Written by a very intelligent and probably very cool Japanese-American woman, MY YEAR OF MEAT is about a very intelligent and cool Japanese-American woman named Jane Takagi-Little whom everyone, Japanese and Americans alike, call Takagi. In addition to some ambivalence about her bi-polar ancestry, she's also quite tall and prefers spiky hair. Not, perhaps, a perfect cultural ambassador (or "cultural pimp," as she says), she nevertheless falls into a job coordinating and finally directing a Japanese TV show to be shot in America for the purpose of promoting US beef in Japan. The show, "My American Wife," is a weekly documentary featuring typical (read white, middle class, wholesome, meat-eating) American families and their favorite meat recipe. Takagi goes along for a while, but then starts to feel that she has a greater mission-to bring the true strength (diversity!) of America into Japanese homes. So she starts filming people like a bayou couple who have adopted eight Korean kids, and an interracial lesbian vegetarian couple. Not exactly what the sponsors and the Japanese agency jerk ("John" Ueno) had in mind. But the meat really hits the fan when she stumbles onto a story about what meat can do to you (and ME and YOU!). This appears to have been well researched, so I'm with you Oprah: no more beef! With plot tangents involving Takagi's love life, Ueno's persecuted wife (who does indeed have her consciousness raised by the show), and various other engaging characters, all interspersed with quotes from Sei Shonagon's Pillow Book, this is a book that will grab you, hold you, scare you and, with surprising frequency, jab you in the gut so you get a bit short of breath and fluttery eyed. It's a damn good book.
Copyright © 2020 Thriftbooks.com Terms of Use | Privacy Policy | Do Not Sell My Personal Information | Accessibility Statement
ThriftBooks® and the ThriftBooks® logo are registered trademarks of Thrift Books Global, LLC