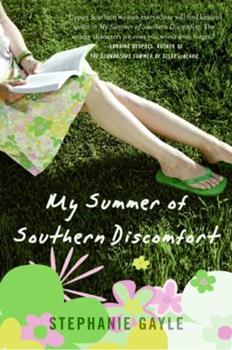 My Summer of Southern Discomfort

Today is Monday. The calls do not come as before. Weeks elapse between them, and when I answer the phone there is no overlap of voices, only my mother's. She spends much of the conversation avoiding mention of the pink elephant trumpeting in the middle of the room. The pink elephant would be my defection to Georgia. When I telephoned with the news of my imminent relocation my father asked, "Georgia, as in the Republic of Georgia by the Black Sea,...

Published by Thriftbooks.com User , 14 years ago
'My Summer of Southern Discomfort' is the first-person narrative of Natalie Goldberg, a liberal young Harvard-educated lawyer trying her first capital punishment case after a turbulent move south to Macon, Georgia. The book touches on a lot of intense issues, including the capital punishment debate, misogyny in the workplace, Southern culture and customs, and romantic obsession. This is NOT chick lit! The Publishers Weekly review above is mostly on the mark (fish-out-of-water, economical prose, memorable voice, and deceptive cover art), apart from its citation of a "dud" line as though that line were exemplary. It is not. They picked out the ONLY "dud" line in the book! So that is kind of annoying, because there are so many lovely one-liners here: "his boyish face aged by disappointment," "I can safeguard the living from threats of violence; I can work to avenge the dead. I can protect the wounded from future harm, or try." That line gave me goosebumps. This is a really satisfying read, in part because Stephanie Gayle handles all the necessary legal jargon and cultural detail in a clear, natural, unobtrusive way. (What I mean is, details like characters drinking mint juleps or the courthouse clock tower rarely telling the correct time are vivid without ever making us think the author is saying, 'remember, we're in the South! I've done my research!', as lesser authors sometimes do.) Natalie is a wholly sympathetic character, and reading her story feels like stepping inside the head of a good friend who's trying to do some good in the world, and trying to find her own place in it.

Published by Thriftbooks.com User , 14 years ago
I just finished this book and was so sad when the last page appeared - I didn't want it to end! Natalie's summer of transformation from a heart broken Yankee to more relaxed Southerner draws you in with a cast of memorable, well developed supporting characters. It is surprisingly well written for a freshman piece. The author's wit and sarcasm shine through out the novel. Her attention to detail, from how things look, smell and sound, helps you feel like you are there in Macon with Natalie, understanding all she is going through. I look forward to Ms. Gayle's second book.

Published by Thriftbooks.com User , 14 years ago
I started reading this book in the evening and didn't put it down until I had finished it at 5 am. Despite my lack of sleep, I felt pretty good about life. Gayle has succeeded in the difficult task of writing a feel-good novel set the real world. This book is an extremely well crafted character study in which crime exists, mistakes are made, people have flaws, and life is complicated. Even so, Gayle deftly reveals her characters' good qualities and binds them into a community that I was jealous to join. The story is told from the point of view of Natalie Goldberg, a woman who is undergoing a profound personal transformation. However, because Natalie is such an observant character, her own issues do not overwhelm the narrative and she brings into focus the other citizens of Macon, who are diverse and well drawn. As a lawyer, Natalie's interaction with her cocounsel, Ben, during a murder trial is probably the most difficult and rewarding relationship in the book, but Gayle gives us enough interesting characters to populate the whole town. This book defies easy categorization; it's not chick lit, a romance, a thriller, a heavy drama, or a frivolity. It was definitely a great read, however, and I would highly recommend it to anyone.

My Summer of Southern Discomfort

Published by Thriftbooks.com User , 14 years ago
This book is a page-turner from start to finish. I quickly became wrapped up in the life of the protagonist and found myself identifying with her in ways I didn't expect. The plotline combines an interesting legal story that touches on several ethical issues with a great character study of several different people, along with a dash of romance. The characters are rich and multi-faceted, so that they really are true human beings with strengths and flaws. I found myself rooting for so many different characters, including ones that I didn't think I would like as people when I started the book. It is a fun read that it also thought-provoking and inspiring to women. I highly recommend this book.

Published by Thriftbooks.com User , 14 years ago
I just finished reading this terrific new book and had to share my enjoyment. I found myself sept into the life of the main character, Natalie, and at the end of the book, I found myself wanting more! The author deeply develops each of the characters that surround Natalie in her life. The court case is interesting, but does not overshadow the transition that Natalie is facing as she moves from New York City to Georgia to start a new life. I found myself rooting for Natalie's success. This was a great summer read!
Trustpilot
Copyright © 2022 Thriftbooks.com Terms of Use | Privacy Policy | Do Not Sell My Personal Information | Accessibility Statement
ThriftBooks® and the ThriftBooks® logo are registered trademarks of Thrift Books Global, LLC