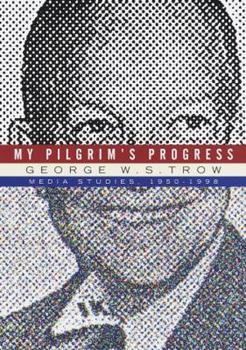 InMy Pilgrim's Progress, George W. S. Trow gives us a brilliantly original and provocative look at what's happened to America in our time -- a guided tour of the media, the politics, and the personalities of the last half-century by one of our most persuasive social critics. This new book by the author ofWithin the Context of No Contextmight be subtitled "A son of Roosevelt reads newspapers, goes to the movies, watches television, and tells us how...

Published by Thriftbooks.com User , 20 years ago
I'm torn about this book and don't really know what to rate it, since I found it wildly uneven. But ultimately I think there are enough interesting insights and thought provoking ideas to warrant 4 stars.Trow meditates on cultural values and attitudes, using examples such as the front page of the NY Times as jump-off points for his reflections. Many of these are very penetrating and allow you to see the development of the country since 1950 in a new light. In particualr, his analysis of the major cultural threads operating at 1950, and the way that TV ended up winning almost by default, was excellent.On the down side, despite the title the scope of the book is very narrow. There is little coverage of anything that has happened since 1960 or so. The book is also rather geographically limited, as Trow is very focused on New York City, upper class intellectual NYC, to be exact.I also found the style to be very distracting. Trow writes in a stream of consciousness fashion, which to me really cripples the book and was almost enough to make me knock off another star. He rarely comes out and states an idea, but instead dances around the issue for 15 pages, constantly getting sidetracked and going off on tangents. In the end, you are forced to go back and fill int he blanks to figure out what he was actually trying to get at. Maybe it makes me old fashioned, but in non-fiction I like writers to actually spit out what they're trying to say, rather than playing games and being cutesy.And as another reviewer mentioned, he has a bad habit of coining new phrases and terminology, which is annoying and makes the book harder to follow than it needs to be. The fact that he often dances around the definition of his terms in the same way he does other things only makes this habit more obnoxious.But on the whole, I'd recommend the book, since it will challenge you and make you think about recent history, as well as restoring a bit of perspective to modern society and its roots in the post-war period.

In the Conext of George Trow

Published by Thriftbooks.com User , 21 years ago
George Trow pointed out elsewhere, in somebody else's context entirely, that a truly privileged, a privileged-from-birth, person was able to, well, analyze, assimilate, interpret remarkably quickly---quickly enough; that quickly---questions of power and privilege in a way that someone who had merely been stunned by them (someone who hadn't had the "privilege" not to be stunned by them) was not. Trow has the grace and congeniality in "My Pilgrim's Progress" to make clear that he's not as privileged as he might sound, or was not at all privileged in the way the Roosevelts, or even the Eisenhowers (whose cultural shock waves he documents), were. Neither was he irremediably stunned. Since his father's position (as an East Coast journalist of a certain vanished kind) was wiped out at the same time the Roosevelts "disappeared"---as forces to be reckoned with, in government or in ethics---or Eisenhower (a military man who'd sensed something wrong in the military and in the country as early as 1959, '49?), Trow is able to describe, because he's seen, several kinds of illusion at close hand, and a deeply contemporary, deeply American denial. (Call it longing.)In this book Trow is the same stylist he's always been--with greater or lesser irony--in all his writing. He still plays around with Mrs. Rittenhouse (except she's last year's Mrs. Vanderbilt, or this year's Diana Vreeland). And he still, sometimes, defines his vocabulary while he's first using it in a sentence, or not long before--while you're still catching up. But "My Pilgrim's Progress" (the title goes right back to Louisa May Alcott, and then some) is the clearest and the most self-declaring of any of his satires, essays, "speeches," or plays. And maybe also the funniest. (It would be a trip and a thrill to hear someone reading the entire book out loud.) The origins of "Perhaps you can force me to tell you" (one of the great Trow-satire sentences) are here, but in their own clothes. The 1963 World's Fair makes another appearance, kittycorner to where it clearly was in "Context of No Context." That book's fedora hat is redefined--or refined. Questions of irony and emotion turn out not to have been easy questions in the interim--for any of us. In short, anyone who worries what some very specific changes---in America, in the media ("hyperactivity," Trow calls this one), in the world---have been doing to our insides (our "selves") should read this book. It's short itself, given all the information--the reporting--that it sums up. It is in no way a "self-help book"; just a very clear diagnosis, no more baffling than any other specialist's. But this specialist is with us in our sense of urgency. He's been trying to take the time; and here he does.

Elegy for a Midwesterner's Blown Mind

Published by Thriftbooks.com User , 22 years ago
Having been raised by television, it has been pretty hard for me to focus on reality, that is, the human exchanges of power that must have, in the first place, created television (right?). I was born in a sub-suburb in the middle of the midwest, with one or two cultural roots that abruptly stopped after my grandparents, who don't really talk about stuff like cultural roots anyway. Well, then I read Mr. Trow's book and it blew my mind clean off. It did this because it demonstrated to me precisely why it has been so bloody hard to find something in life and language deeper than television and hollywood movies. The linguistic way out of TV and Hollywood was, of course, the liberal arts. But as thrilling, interesting and mysterious as the liberal arts were, I never managed to make them as central a part of my consciousness as is, say, Star Wars. This is why: the liberal arts have always flourished in an environment of cultural connectedness to the flow of history and of real human power in terms of values "deeper" than money. To George Trow, who is perhaps the only real old world Harvard-educated WASP alive who is able to watch television alongside folks like myself--speak both languages, as it were--the liberal arts are visceral. To me they are mostly obscure and dry, with flashes here and there of accessibility. The polyglot author of "My Pilgrim's Progress" showed me, in cruelly stark relief, just what my cultural and lingustic coordinates are on the world-historical grid. For that, I thank him--I think.

Published by Thriftbooks.com User , 22 years ago
Maybe "Context of No Context" was a good book, but "My Pilgrim's Progress" isn't even a bad book. It's a hoax on the reader. It's one long, repetitious, self-justifying bleat! Is the author senile, or just soused? He should have called it "My Long Day's Journey Into Night."

Wonderful. One of a kind.

Published by Thriftbooks.com User , 23 years ago
In "My Pilgrim's Progress," George W. S. Trow abandons the impersonal, incantatory voice of his celebrated 1981 essay "Within the Context of No Context" for a free-flowing, deeply intimate act of performance art on the page. If the astounding "No Context" was a late 20th century "The Waste Land", then Trow's newest book is his "Krapp's Last Tape." With razor-sharp wit, brilliant insight, and what can only be described as a broken heart, Trow pours into a tape recorder his analyses of an eclectic series of "Mainstream American Cultural Artifacts" (everything from the front page of the February 1, 1950 edition of The New York Times to the films of Alfred Hitchcock to the documentary "Elvis 56") in order to achieve the possibility of compassion and forgiveness for what he understands to be five decades of personal, cultural, and spiritual "abandonment." The depth of pain and urgency - the life and death personal stakes - behind the author's voice raise what might have been merely a rambling, anecdotal memoir into a work with enormous power. "My Pilgrim's Progress" resonates with the intimacy and significance of a death-bed confession. It is a gut-wrenching, remarkable, "feverish" monologue about our contemporary American history. An extraordinarily moving book.
Copyright © 2022 Thriftbooks.com Terms of Use | Privacy Policy | Do Not Sell My Personal Information | Accessibility Statement
ThriftBooks® and the ThriftBooks® logo are registered trademarks of Thrift Books Global, LLC