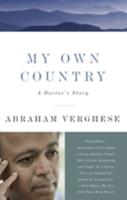 My Own Country: A Doctor's Story

By the bestselling author of Cutting for Stone, a story of medicine in the American heartland, and confronting one's deepest prejudices and fears. Nestled in the Smoky Mountains of eastern Tennessee, the town of Johnson City had always seemed exempt from the anxieties of modern American life. But when the local hospital treated its first AIDS patient, a crisis that had once seemed an "urban problem" had arrived in the town to stay. Working in Johnson...

Published by Thriftbooks.com User , 18 years ago
The child of Indian expatriates, himself an immigrant, Dr. Abraham Verghese found a home among the country people of Tennessee and an extended family among this Bible Belt's first AIDS victims. Verghese, who began his residency in Johnson City, Tenn. in 1980, gives two reasons for specializing in infectious diseases (ID). One, his mentor convinced him it was the only specialty where cure was common. Two, as it was not a glamor field, a foreign ID doctor had a better shot at training at a top university hospital. Simple, sensitive and scrupulously honest, Verghese's book is alive to the ironies, tragedies and heroism of the first days of the AIDS epidemic. After training in Boston, where he saw his first AIDS patient, Verghese and his wife returned to idyllic Appalachia in 1985, expecting their first child. Aware of his outsider status, Verghese sets about finding, and making, his place. His rounds encompass two hospitals, the Mountain Home VA, a residence where he sees elderly vets and a lot of lung cancer, and the modern Johnson City Medical Center, the "Miracle Center." The contrast is vivid. Although Johnson City has no AIDS patients and its single experience with a New Yorker who didn't quite make it home to die is "suppressed like a shameful memory," Verghese sets out to educate the population, to prevent AIDS here if he can. His first visit to a gay bar to show an educational video is fraught with discomfort on numerous levels. The stiff self-consciousness of his early encounters with gay men in Boston is being consciously replaced with curiosity. "There was an obvious parallel: society considered them alien and much of their life was spent faking conformity." Still, it's a small town and Verghese is a foreigner with a reputation to build. But his educational efforts bring in his first cases. He is excited, on the cutting edge of medicine. The HIV virus has been identified and a cure is surely just around the bend. He makes house calls, gives patients as much of his time as they need, and in a zealous spirit of medical documentation, friendship and plain human curiosity, elicits histories so personal it's difficult to imagine them spoken aloud. As his AIDS practice grows, Verghese encounters bigotry and anger among his colleagues and community. But more profound is the bravery and generosity of spirit the disease arouses among the most unlikely people - the poor, the uneducated, the sick. He is touched, humbled, uplifted by the friends and relatives of his patients and often by the patients themselves. But the hideousness of AIDS cuts a nasty swath. The bravest face a horrible, lingering and disfiguring death, usually in the prime of life. Verghese's descriptions of disease are unflinching. As his case load grows to 80 and death becomes a commonplace, Verghese is beset by nightmares of infection and feelings of helplessness. His wife, frightened and resentful, withdraws from him. Similar attitudes in the medical community arouse fu

One of the best memoirs I've ever read

Published by Thriftbooks.com User , 23 years ago
With the eye, ear and voice of a novelist and with the compassion of a healer, Dr. Abraham Verghese has taken his experiences as "the AIDS doctor" of east Tennessee and turned them into an incredible memoir. This is one of the most touching and engrossing books I've read in years.When Verghese landed in Johnson City, Tennessee in 1985, he came as a newly-accredited infectious diseases specialist to treat veterans, most of whom had lung cancer and emphysema, and to spend one day a week in the town medical center he learned to call the "Miracle Center". When the center's first AIDS patient entered the hospital, it was the beginning of the plague which would soon extend across the country, not just in the big city locales where the majority of homosexual men and drug abusers lived. They were coming home to die.Because the young doctor had a strong desire to help and an ability to tolerate the differences of others, he gradually found himself almost obsessed with caring for his patients. He loved them as people, and as they began to die, he mourned. They were on his mind constantly, even when he was home with his beautiful wife and small sons to the point where his marriage and the center of his home became endangered by his devotion to a setting and to people which excluded them.This book is so beautifully written I could not put it down. Each patient became fully alive for me, thanks to Verghese's ability to describe them, and I, too, mourned them as they passed. This is a memoir I will not soon forget. Poignant in its humanity, staggering in the scope of its tragedy, it will remain Verghese's monument to Tennessee and the people he came to love in all their variety.Wonderful book.

Published by Thriftbooks.com User , 26 years ago
Dr. Verghese beautifully captures the Appalachian essence of innocence and trust, and the clash that happens when a feared viral intruder puts its mark on relatives and neighbors. The exposure and initiation of a foreigner to country ways and mindset makes for some comical moments. The text is very creative, expressive and easy to read

A compelling view of the onset of AIDS in rural Tennessee.

Published by Thriftbooks.com User , 26 years ago
"My Own Country" combines medical fact with compelling personal history in a way that reveals the true nature of human understanding for what is "foreign" to us all. Dr. Abraham Verghese comes to rural Tennessee as the foreign graduate of a foreign medical school; rural Tennessee being one of the few areas that will allow him to practice in the United States. At the time of his arrival, the AIDS epidemic arrives as well. Dr. Verghese relates the stories of the victims and their families in the setting of his own acceptance among these bewildered people. Through careful detail, Dr. Verghese is accepted among the citizens of Johnson City, Tennessee, just as they slowly come to accept the reality of the AIDS virus and its consequences in their lives. Told in language easily understood by non-medically trained readers, this story becomes a history of our people and their ability to adapt to difficult and heart-rending life experiences. Dr. Verghese celebrates the ability of the human spirit to accept disease and its consequences while he uses his keen sense of observation to show his own acceptance among these "new people." Dr. Verghese's ability for insight into the pain and suffering of patients families and the ultimate triumph of our compasionate nature is beautifully rendered. This book cannot be recommended highly enough for the many areas in which it succeeds. Ultimately, the book becomes a history of AIDS, medicine and the way both interact with victims who little understand the disease itself.

A compelling journey into the heart of the AIDS epidemic.

Published by Thriftbooks.com User , 26 years ago
Few books can transport the lay reader into the center of an epidemic with such honesty, compassion and intelligence as MY OWN COUNTRY. As a specialist in infectious diseases, Dr. Verghese describes the unexpected and insidious advance of the HIV virus into a small Tennessee town. By taking us into the hearts and homes of the victims and their families, he paints an unforgettable picture of the emotional and physical impact of this epidemic while helping us to understand the intricacies of the many ways in which AIDS attacks the body and mind of its victims. More than their physician, Dr. Verghese becomes friend, confidant and healer of both body and spirit to his patients and their loved ones. With painful candor, he also details the terrible personal price he and his family are forced to pay because of his dedication. While displaying both grace and compassion, Dr. Verghese surprises the reader with his gift for lyrical description and his ability to see beyond the techical perimet
Trustpilot
Copyright © 2022 Thriftbooks.com Terms of Use | Privacy Policy | Do Not Sell My Personal Information | Cookie Preferences | Accessibility Statement
ThriftBooks® and the ThriftBooks® logo are registered trademarks of Thrift Books Global, LLC