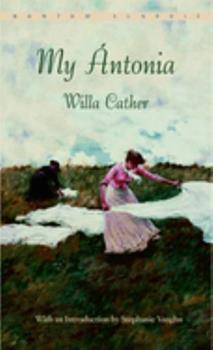 "The best thing I've done is My Antonia ," recalled Willa Cather. "I feel I've made a contribution to American letters with that book." ?ntonia Shimerda returns to Black Hawk, Nebraska, to make a fresh start after eloping with a railway conductor following the tragic death of her father. Accustomed to living in a sod house and toiling alongside the men in the fields, she is unprepared for the lecherous reaction her lush sensuality provokes when she...

"She was a rich mine of life, like the founders of early races."

Published by Thriftbooks.com User , 13 years ago
Published in 1918, this novel, set on the plains of Nebraska, is as fresh and memorable today as it was when it was published, largely because author Willa Cather has chosen to emphasize her fascinating characters and setting, instead of creating a fast-paced plot. As children, Jim Burden and Antonia Shimerda arrive on the plains of Nebraska at the same time, he to live with his grandparents, and she and her family to try to carve out a new life for themselves after emigrating from Bohemia. Jim narrates the story, as he and Antonia discover that nature offers many opportunities for exploration and joy. Both children also help work their farms, however, and they also understand nature's harshness. For Cather, who lived in Nebraska, life on the plains, seen through Jim and Antonia and their families, offers freedom and independence--the kind of sturdy self-reliance that enables children to build strong characters. Though her portrait of life on the farm is sometimes romantic (as seen, for example, with Jim's first Christmas celebration during a snowstorm when everyone is housebound), life is also full of danger and uncertainty, a price farmers are willing to pay to live close to the land and away from cities. Eventually, both Jim and Antonia leave the farm for better opportunities, she to work in Black Hawk, and Jim to attend Harvard. Their paths diverge and do not reconnect for twenty years. Antonia, as Jim lovingly portrays her, is a character who throws herself into whatever she is doing, whether it is plowing or learning to cook. Her joyful embrace of whatever life offers is a testament to her spirit, which we see as characteristic of the strong, independent prairie women she represents. Jim, on the other hand, though professionally successful, is far more constrained, a man whose character may have been formed on the prairie but whose life has moved toward the hurly-burly of urban life. Antonia becomes Mother Nature or the Earth Mother, a woman surrounded by many children on the farm, while Jim, who works for the railroad and lives in the highly populated east, represents the growing industrialization of the country. Throughout this warm and sensitive novel, Cather includes many symbols. When Jim, in the presence of Antonia, kills a gigantic snake, the Garden of Eden comes to mind. The seasons dominate the lives of the characters, and some of the saddest events occur in the depths of winter. Roads wind into and out of the farmland and are a sharp visual contrast to the railroad for which Jim eventually works. As Cather develops her characters and follows them for twenty-five years, the reader comes to know them and to understand their choices. A moving tribute to the pioneer spirit and to those, like Antonia, who helped settle the plains. Mary Whipple The Professor's House (Vintage Classics) Cather Novels & Stories 1905-1918: The Troll Garden, O Pioneers! The Song of the Lark, and My Antonia Great Short Works of Willa Cather Willa C

Published by Thriftbooks.com User , 13 years ago
What struck me about the book was how vividly Cather captured the immigrant's struggle with the new land - their having to accept the beginning of a denial of a past that seems in the frozen wasteland of america to have been a better place. the third generation characters describing the immigrants see this from a distance and are judgmental, though they understand the harshness of the process and do their best to help the 'ignorant' along. for capturing this particular spirit of the american mind, this book gets a definite 5 stars.

The Woman Who Won The West

Published by Thriftbooks.com User , 14 years ago
The trappers and the Mountain Men grew old. Carson stayed on but most went east. The wagon trains moved on to California and Oregon. Bat Masterson and Wyatt Earp ended their days near New York City. Antonia stayed. Not many others did. Lied to by land agents, often speaking no English and ignorant of farming, they found themselves on plains and prairies whose very extent is frightening, and at the mercy of constant wind, blizzard, drought, hail, prairie fire, locusts ... the list goes on and on. Five minutes of hail might wipe out a crop ready for harvest. Rain is too much or too little, and never at the right time. In blizzards, men and women have gotten lost and frozen to death between the house and the barn; and the roads may not open for weeks. Railroad rates were exorbitant and the local banks - themselves struggling to survive - ever ready to foreclose. Antonia would have seen the wagons rolling East: "In God We Trusted. In Nebraska we busted." Few of her descendants stayed on. Like Cather herself and Jim Burden, the lure of the outside world, the city, was strong. There were often too many kids to leave each enough land to live on. One hundred - twenty, one hundred - fifty years later, a few of the old names survive. One is Pavelka. Antonia Shimerda is the real person, Annie Pavelka. We leave her in 1914, but she lived well into the 1950s and is buried near Red Cloud, Nebrasks. Her stone is a monument to that tough, stubborn breed who turned the Great American Desert into the breadbasket of the world. Read about her. You'll take her to your heart.

Published by Thriftbooks.com User , 16 years ago
I first read this book when I was in junior high school. I admit that, at the time, I did not appreciate the strengths of the book and the quality of its writing. I am quite glad that I decided to give it another chance, as, having re-read it, I now understand why it is considered to be a classic in literature. It is simply a beautifully written book, covering many of the themes that one stumbles across in life and coalescing them into a work of extraordinary breadth. The book is the story of two young people, Jim Burden and Antonia Shimerda. They meet for the first time when Jim is ten years old and Antonia is fourteen. Recently orphaned, Jim has moved to the Great Prairie to live with his grandparents in Nebraska. Antonia, on the other hand, has been wrenched from her homeland in Bohemia, emigrating with her parents to the United States and finding herself in Nebraska. Jim and Antonia's chance encounter on a train sets the stage for the forging of a friendship and unconditional love that time will not diminish. The book relates the harshness of immigrant life through the eyes of Jim, who narrates the events contained in the book. There is a relentless stoicism about the book, which is written in spare, clear prose. With intense imagery and descriptive exactitude, late nineteenth century Nebraska comes to life. It also relates the paths that each of the characters choose to follow, as well as the vicissitudes of life that mold and shape them in ways that no one would have imagined. The focus of the book, which is also a coming of age tale, seems to be on the female characters and their strengths. All the women in it seem to be survivors, despite the hardships that they encounter. This is, without a doubt, a life affirming book, wrought with great feeling and a decided sense of time and place. Yet, despite its poignancy, the book is surprisingly unsentimental and straightforward. It is a testament to the author's literary talent that this book has emerged as a timeless classic. Bravo!

Some memories are realities

Published by Thriftbooks.com User , 16 years ago
When Willa Cather was writing "My Antonia," she visited her friend, the journalist and war correspondent Elizabeth Sergeant, grabbed an old apothecary jar filled with flowers, set it in the center of an antique table, and explained: "I want my new heroine to be like this--like a rare object in the middle of a table, which one may examine from all sides. . . . I want her to stand out--like this--like this--because she is the story." This anecdote (recounted in James Woodress's biography of Cather) sums up almost exactly the technique that makes her novel both unique and unusual. Instead of writing the story from her heroine's point of view, or from the point of view of an omniscient narrator, Cather instead creates a bystander, the likeable and somewhat innocent Jim Burden, who has written down a series of memories where his and Antonia's lives intersect; "My Antonia" is a biography through the mask of autobiography. While this is Jim's story as much as it is Antonia's (she is barely mentioned at all in Book III), we are ultimately studying a much-loved thing of beauty from "all sides"--from the distance separating it and the observer. Although "My Antonia" relates a number of exciting, sentimental, horrifying, and even scandalous incidents (none of which will be divulged here), Cather very deliberately chose to write a character novel rather than an action story. Many of the book's pivotal "events" happen offstage; we learn what has happened only when Jim hears about Antonia or runs into her at a gathering or stops by her home. Such a detached approach is a departure from that used by many of the American naturalists (e.g., Dreiser, Lewis) writing during this period, yet her book is surely a model of realism. As Jim writes when he notes his reluctance to visit Antonia when they are both grown, "Some memories are realities, and are better than anything that can ever happen to one again." As with all of Cather's novels, the prairie town of Black Hawk (which, is of course, Cather's hometown of Red Cloud), is populated with a variety of hirelings and homesteaders, dreamers and pretenders, romantics and scoundrels. (Cather seldom sketched a character as downright wicked as the would-be rapist Wick Cutter.) But none of the townsfolk outshine either the affectionate, if platonic, rapport between Jim and Antonia or the unforgettable portrayal of Antonia herself.
Copyright © 2020 Thriftbooks.com Terms of Use | Privacy Policy | Do Not Sell My Personal Information | Accessibility Statement
ThriftBooks® and the ThriftBooks® logo are registered trademarks of Thrift Books Global, LLC