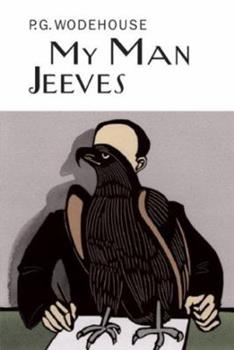 (Book #1 in the Jeeves Series)

Published by Thriftbooks.com User , 11 years ago
Originally published in 1919, this collection contains four early Jeeves adventures and four tales featuring Reggie Pepper, who was a sort of prototype for Bertie Wooster. Stories include: Leave It to Jeeves Jeeves and the Unbidden Guest Jeeves and the Hard-Boiled Egg Absent Treatment Helping Freddie Rallying Round Old George Doing Clarence a Bit of Good The Aunt and the Sluggard Many of these stories would later appear, with only slight changes, in Carry On Jeeves. The writing is typical Wodehouse: breezy, slightly sardonic and really quite funny. 4.5 stars.

Published by Thriftbooks.com User , 12 years ago
Jeeves is what I needed! If I can't get him in real life that 2nd best is still great: Reading him here! There are so many great Jeeves stories that you can't go wrong - but this is one of the best. He gets Mr. Wooster out of so many jams that I can't keep track - except to say each one is a great farce! If you have not read any of Wodehouse's Psmith - you are in for a treat - there are only 4 Psmith novels, but each is fantastic. This one will get you off to a great start: Leave It To Psmith: A British Humor Classic

Published by Thriftbooks.com User , 12 years ago
I had not read P.G. Wodehouse before, but I'm glad I read this little gem. I found the collection of short stories to be very entertaining and well written. A nice addition to my ecclectic Kindle 2 mix!

Published by Thriftbooks.com User , 18 years ago
Martin Jarvis' reading of My Man Jeeves runs circles around Jonathan Cecil's reading of *anything* (for more ranting on Cecil, see Psmith: Journalist). He simply embodies the characters of Bertie Wooster, Jeeves, Biffy, Corky, and all the cast (albeit with the same typical attempt at an American accent). This recording consists of the two stories from the printed Carry On, Jeeves collection that were left out of the CD copy of the Carry On, Jeeves audiobook--one of which has Jeeves himself as the narrator--as well as three stories starring Bertie Wooster's predecessor, Reggie Pepper. Pepper by himself isn't as funny or touching as the relationship between Jeeves and Wooster, but the predicaments are identical to those that Bertie would find himself getting into. The only difference is that Reggie manages to extricate himself from the troubles, unlike Bertie, who relies on the wiles of his man, Jeeves. Either of this or Carry On, Jeeves would appeal to the casual Wodehouse fan, and are perfect for long road trips or any other situation where a laugh is needed. Wodehouse exceeds all others in humor and, one assumes, will remain that way for centuries to come.

Jeeves and Jarvis- a wonderful concoction!

Published by Thriftbooks.com User , 18 years ago
What can I say about P.G. Wodehouse's stories that hasn't already been said? They're brilliant! Delightful! Charming! Pleasant as a post-prandial brandy! It has, however, been said that for full effect these stories must be read aloud. Well, really, I say. Who's got time? What? Martin Jarvis! That's who! The finest audio book reader to ever grace my hi fi! Nobody brings Bertie Wooster and Jeeves to life with the elegance and charm of Mr. Jarvis. His range of voices is surperb! His delivery is spot on, and his love of the material is evident.You may wonder how I can say his readings surpass even those of Mssrs. Fry and Laurie. The answer is simple. The televised version (which is excellent) cannot contain every syllable, every illiteration Wodehouse penned. The audio version can!The stories here include two from CARRY ON JEEVES, finishing out that selection, as well as three others. My only complaint, if that can be said, is that the three other stories do not involve The Jeeves/Wooster duo. But who cares? They are wonderful anyway.This collection is a delight and truly worth adding to your collection- even if you own the books. However, I don't recommend listening to them while driving. You may lose control during a fit of laughter. Vive le Jeeves! Vive le Jarvis! Vive le Wodehouse!
Copyright © 2020 Thriftbooks.com Terms of Use | Privacy Policy | Do Not Sell My Personal Information | Accessibility Statement
ThriftBooks® and the ThriftBooks® logo are registered trademarks of Thrift Books Global, LLC