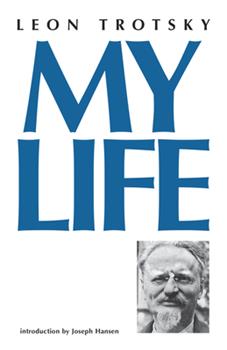 My Life: An Attempt at an Autobiography

Autobiographical account by a leader of the October 1917 Russian revolution, the Soviet Red Army, and the battle initiated by Lenin against the Stalinist bureaucracy.'One of the best books of reminiscences.' [Trotsky's] capacity for not measuring the historical process by the yardstick of his personal fate ? makes this book so much better than the unconvincing apologias of kings and statesmen.' [The] author is obviously a born writer.'?The Nation

Leaves you wihing you were there!

Published by Thriftbooks.com User , 14 years ago
My Life is a fascinating book. I was most attracted to the style in which Trotsky took responsibity for his mistakes. He didn't try to blame others for what happened at Kronstadt. My Life is a wonderful show of a great and bizarre life. Since the McCarthy era, it has become fashionable to slander revolutionaries or look for "Physcological" motives. My Life is written from a bias, but it certainly has none of taint of an author who tries to discredit someone smarter than them. My Life also show Trotsky as a complete person- bound by unbreakable ties to an idea. My Life is written as many different things- half autobiography and half history of the revolution. The only thing I found bad about My Life is how absorbed it is in its time. My Life is entertaining and readable, and includes some rather funny incidents- like Trotsky naming his socks after Soviet leaders. The only fault is that My Life requires a basic understanding of events to be fully understood. For instance, if you haven't the foggiest what permenant revolution is, you may need to find out. My Life is idea-based, and challenges readers to discover those ideas- and then to do something about them. Buy the book-it is worth a $1,000

The Making of a Revolutionary

Published by Thriftbooks.com User , 15 years ago
Today we expect our political memoir writers to take part in a game of show and tell about the most intimate details of their private personal lives on their road to celebrity. Refreshingly, you will find no such tantalizing details in Russian Bolshevik leader Leon Trotsky's memoir written in 1930 just after Stalin had exiled him to Turkey. Instead you will find a thoughtful political self-examination by a man trying to draw the lessons of his fall from power in order to set his future political agenda. This task is in accord with his stated conception of his role as an individual agent at service in the historical struggle toward a socialist future. Thus, underlying the selection of events highlighted in the memoir such as the rise of the revolutionary wave in Russia in 1905 and 1917, the devastation to the socialist program of World War I and the degeneration of the Russian Revolution especially after Lenin's death and the failure of the German Revolution of 1923 is a sense of urgency about the need for continued struggle for a socialist future. It also provides a platform as well for polemics against those foes and former supporters who have either abandoned or betrayed that struggle. At the beginning of the 21st century when socialist political programs are in decline it is hard to imagine the spirit that drove Trotsky to dedicate his whole life to the fight for a socialist society. However, at the beginning of the 20th century he represented only the most consistent and audacious of a revolutionary generation of Eastern Europeans and Russians who set out to change the history of the 20th century. It was as if the best and brightest of that generation were afraid, for better or worse, not to take part in the revolutionary political struggles that would shape the modern world. As Trotsky notes this element was lacking, with the exceptions of Rosa Luxemburg, Karl Liebknecht and precious few others, in the Western labor movement. Trotsky using his own experiences tells the story of the creation of this revolutionary cadre with care and generally proper proportions. Many of the events such as the disputes within the Russian revolutionary movement, the attempts by the Western Powers to overthrow the Bolsheviks in the Civil War after their seizure of power and the struggle of the various tendencies inside the Russian Communist Party and in the Communist International discussed in the book may not be familiar to today's audience. Nevertheless one can still learn something from the strength of Trotsky's commitment to his cause and the fight to preserve his personal and political integrity against overwhelming odds. As the organizer of the October Revolution, creator of the Red Army in the Civil War, orator, writer and fighter Trotsky he was one of the most feared men of the early 20th century to friend and foe alike. Nevertheless, I do not believe that he took his personal fall from power as a world historic tragedy. Moreover, he does not gloss

Life is Beautiful when you fight to change the world!

Published by Thriftbooks.com User , 19 years ago
The phrase "Life is Beautiful" in the Italian film came from Leon Trotkys's last testament. It was written in exile in Mexico. At the time Trotsky's friends, family, and comrades were being harassed, slandered and murdered by Stalin, when he himself faced imminent assasination. He also faced death from the growing illnesses that had slowed him. Yet, in his testament he proclaimed that life is beautiful. Life must be cleansed of the evil and garbage Capitalism and Stalinism have left to this world. Read this book and you will see how Trotsky's life became valuable for him because he decided to fight oppression, decided to learn about the world to fight, and never stopped fighting. Maybe your life can be beautiful if you read this book, and decide to fight like Trotsky did. The introduction by the late Joseph Hansen Trotsky's secretary in Mexico is worth the price of the book. Joe explains how the household and work center in Mexico functioned, about how Trotsky valued hard work, but also valued celebrating comrades birthdays, hobbies like raising rabbits, trips to sites of Mexican history. Reading this also tells you how Joe organized the staff at World Outlook/ Intercontinental Press, working with him was one of the great privileges of my life. In these pages and memoirs of Trotsky by Joe, George Novack, Farrell Dobbs, and other comrades who knew Trotskty, you could find how serious Trotsky enjoyed and embraced life. In Turkey if he wanted to go fishing, he went to sea with Turkish fishers in their trawlers. If he wanted to raise rabbits as a hobby, he soon was taking care of something bordered on a commercial rabbit farm. Both in valuing work--chained to his desk was the term Trotsky passed down--and valuing parties and celebrations of new people coming onto the staff and leaving, Trotsky made his life beautiful. Read this book, valued as much as a literary work as a political statement, and learn how you can make your life beautiful.

Published by Thriftbooks.com User , 19 years ago
When I decided to write this review, I had to choose between the various reasons why it's so beautiful and important. But, above all, I think that, in a world where the necessity of Marxist was supposedly to be more deeply felt than ever, what repels most people that would be liable to lend an ear to it is the repelling Stalinist mythology of the revolutionary as the relentless, ruthless, single-minded, google-eyed fanatical. Trotsky, on the contrary begins by assessing that, although his life was out of the ordinary, he neverthless remained a men with a penchant for a well-ordered ordinary life; that he found pleasure in seeing a well-ordered table or a well-kept fence; that he didn't becomne a revolutionary out of a feeling of opression, but because of being faced with a life that, although prosperous, offered him nothing but grey drudgery and no opprtunity for individual achievement; that he, like all revolutionaries, was a man like any other. I think that would be reason enough to commend this modern classic to the reader of today, outside from the wonderful style, the importance of the events narrated and so much else.

It changed the way I look at my life

Published by Thriftbooks.com User , 25 years ago
A love story. An adventure novel. A mystery. A philosophical treatise. When I read it, My Life set my soul on fire. In a world of injustice and irrationality, My Life shows a world of men as they can be and should be. A hymn to the nobility of man's spirit, My Life tells of a beautiful man who sips tea and discusses poems and his quest for an ideal. It tells of a Russia in which scruffy workers and politicians/criminals in Moscow try to smother the productive men of ability in that country and everywhere else. It tells of one man, who, in order to save the world, had to give up what he loved most: playing golf. Upholding heroism, bravery, and geniality, My Life is not only a philosophical triumph, but a literary one as well. Leon Trotsky's 150-page masterpiece shows such integration, such skill -- every word was written and rewritten until the sound, the meaning, and the meter were not only perfect for the sentence, but for the entire book as well. Written with unimaginable passion, My Life elicits so much feeling on the part of the reader -- as I read it, certain phrases or sentences made me just lean back, close my eyes, and savor the words on my tongue. Controversial, intellectually challenging, enthralling, exciting, and totally entertaining -- My Life shows Trotsky's genius as a writer and his ability as a storyteller. Each sentence conveys the content of his mind and the passion of his heart. Read this book and your life will never be the same.
Copyright © 2020 Thriftbooks.com Terms of Use | Privacy Policy | Do Not Sell My Personal Information | Accessibility Statement
ThriftBooks® and the ThriftBooks® logo are registered trademarks of Thrift Books Global, LLC