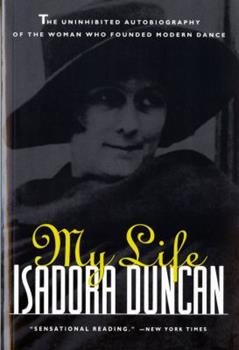 My Life , the classic autobiography first published just after Duncan's death, is a frank and engrossing life account of this remarkable visionary and feminist who took on the world, reinvented dance, and led the way for future great American modernists Ruth St. Denis, Agnes de Mille, and Martha Graham.Documenting Duncan's own life as a dancer and as a woman--from her enchantment with classical music and poetry as a child in San Francisco and her...

Published by Thriftbooks.com User , 15 years ago
A dancer and visionary far ahead of her time, Isadora's story is told in such an intimate personal voice that you feel as if she's confiding in you. She lived her life so vividly that it takes on the color and bravado of a mythic odyssey. Isadora inspires me to fully inhabit my artist's soul and to allow the purity of my heart to infuse every breath, every step. Life is a dance to be danced, a charmed and poignant tale unfolding. Play the part in full heart, she seems to be telling us, play it well.

rereading the autobiography of a ghost

Published by Thriftbooks.com User , 19 years ago
I first read this book after seeing Ken Russell's film "The World's Biggest Dancer" in the 1960's The film is, unfortunately, lost. I fell in love with the myth of this fabulous woman and was impressed with Vanessa Redgrave's portrayal of her in Karel Reisz's "Isadora" also hopelessly lost I believe. This is not a great work of art: it has episodes of naively underwritten material tailored into whole paragraphs of wonderful philosophy of a futuristic world when art and beaty supercede greed and material gain. The ghost of Isadora haunts this book; a woman broken by personal tragedy writing these words in the last years of a life that, by any standards, was extraordinary. I keep it on my shelf along with Nijinsky's "Life" both books testimony to the inability of words to express the emotions of genius

Published by Thriftbooks.com User , 19 years ago
Easily one of the best conversations I have had without speaking. Isadora speaks directly to her reader with a passionate and intense language. There were points when I was reading that my inner voice was yelling back in agreement, empathy or appreciation. I found this woman intelligent, hilarious and dramatic. I felt as though I had made a friend. Though she was not a trained writer, she has been able to share herself very openly in the written language. I think this is a must read for any woman (or man).

Published by Thriftbooks.com User , 21 years ago
An autobiography is a way of looking inside a person's mind. We have no real right to expect objectivity or "the long view" on any given subject.Isadora Duncan's autobiography is a terrific example of the above. She was a hugely talented, flamboyant individual who chose to march to her own drummer from an early age. She is passionate in her descriptions of her inner life, her career and her lovers and changed the whole concept of "The Dance", breaking away from ballet (which she considered ugly and contrived) and inventing what we'd call "modern dance".She was a fantastic dancer, but as a writer she is far too interested in her own inner world. The people around her float by as a succesion of badly defined cardboard cutouts, and one visited city sounds much like any other. After a while this DOES get rather boring. The lack of dates (such as "that was in 1925" or whatever) or a neatly defined chapter structure means that it's pretty hard to keep track of the passage of time. In the end, reading this book becomes a bit of a struggle: it's like being stuck in a someone's rather boring dreamworld.Her sollipsism is (at times) a bit of a hoot and her inability to perceive the world for what it is provide the reader with occasional bits of unintentional black comedy.An example: after deciding that ancient Greece was the mother of all art, Isadora sunk a great deal of her money in trying to rebuild a Greek temple. Her family spoke no Greek but lived for months amid the ruins, performing dances and wearing togas while getting cheated by the local villagers. She also formed a chorus of Greek urchins to perform ancient music and was later disappointed when during a tour, the urchins begin growing up and staying out late and coming home drunk.A more human writer would have managed a bit of irony, a touch of sympathy for these common, simple people caught up in the mad American artist's vision, but Isadora never quite manages it. Sadly, it is precisely this sort of self-centered and humourless viewpoint that makes this book so stodgy.On the positive side, however, one DOES get a really good idea of what Isadora Duncan was like and how she saw her art and one can't really ask for more from an autobiography.