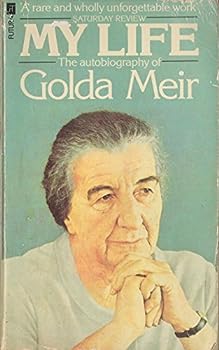 This description may be from another edition of this product. Book by Golda Meir

Published by Thriftbooks.com User , 17 years ago
My Life by Golda Meir is a compelling autobiography, which tells of the life of this amazing woman, from her early poverty-stricken childhood in Kiev, to her tenure as Prime Minister of Israel, from 1969 to 1974.It is also the story of Zionism, and the State of Israel-it's struggle to be born, amidst Arab and British hostility, and its struggle to survive against the venomous hatred of the Arab world, and the treachery of the international community.She writes at length about the struggle against the British, who did their dammdest during the 1930's and 1940's to ensure that the Jewish State would be stillborn in blood. The British barred millions of Jewish men, women and children fleeing Hitler, from entering Israel, turning them back to perish in the Nazi ovens. And even today the attitude of the British establishment towards Israel, is one of uncompromising callous poison.Written in 1975, the world still made a lot more sense then, as this was before it became so illogically fashionable to so viciously hate tiny, democratic Israel. But still the trends that would intensify where beginning. Gold Meir was a lifelong Socialist, but spared no punches in condemning the Soviet Union for it's perfidious backing of all Arab attempts to destroy Israel. She also condemns the New Left, which at the time the book was written, where beginning their hate campaign against Israel.She refers to her disgust at the honoring by the UN of mass murderer, Yasser Arafat: " It is bitter to write...now, in a world that has chosen to endow Arab terrorism with glamour, and to admit to the so-called council of nations, a man like Yasser Arafat, who has not one constructive thought or action to his credit, and to put it quite plainly, is only a consumed multiple murderer, heading a movement dedicated solely to the destruction of the State of Israel."Today this has not changed, except that Arafat has claimed millions of more victims, and has the support of world academia, the world media, and countless Arab and Third world regimes. Meir also rejected the creation of a third Palestinian state between Iraq and the Mediterranean, but was prepared to countenance the ceding of parts of the West Bank to Jordan. Sadly, the decision to reverse this stand by her Labour Party has caused the spilling of much blood. She writes much about her work in bettering the lives of both Jews and Arabs in Israel , and her work in helping with the development of much of newly independent Africa in the 1960's and early 70's (before the African States turned on Israel after the Yom Kippur War of 1973). But the primary message of this book is this: " I have seen my five grandchildren grow up as Jews, in a country that is their own. Let no one have any doubts about this. Our children and our children's children will never settle for anything less."

Published by Thriftbooks.com User , 18 years ago
This is a first rate account of the history of Israel told through a compelling and modest voice of one of its most important founders. This book greatly deserves a new printing and extensive circulation. Golda Meir's autobiography is simply and powerfully written. Her account of her childhood in Russia and youth in the USA is straightfoward and unsentimental and shows the early roots of one of the most dedicated and ethical leaders of the century. While free of self-aggrandizement her gifts as a speaker and reprentative of the Jewish people are clearly presented (through speech excepts), and her account of the development of the state of Israel and its first 30 years.

Published by Thriftbooks.com User , 20 years ago
This was a very good history book as well as a touching novel. You are able to trace the life of Golda Meir from her days as a school teacher in Milwaukee to her days as prime minister of Israel. Through this book you are also exposed to a great deal of Israeli history. This book also gives you insight into some of the great leaders as well as the great events that helped to shape the nation of Israel. It was especially entertaining to read her opinions of David Ben Gurion and Moshe Dayan. The Yom Kippur war also makes for interesting reading. All in all this is an interesting book that you will certainly enjoy reading.

Published by Thriftbooks.com User , 22 years ago
Beautifully written memoirs of one of the key players in the building of the Jewish State. A must read for anyone who wants to truly understand Israel and it's place in the Middle East. This is the type of book that you will read late into the night, and will bring tears to your eyes.

Published by Thriftbooks.com User , 22 years ago
Reading this book taught me more about the dedication and bravery of the early Zionists than any movie could, since it is told by one of the principal actors on the scene. After reading this account of a woman who helped found the state of Israel under the most incredibly difficult personal and political conditions, it is hard to believe any more in the idea of the "impossible". So, I'm gushing! I wish there were a volume 2!
Copyright © 2020 Thriftbooks.com Terms of Use | Privacy Policy | Do Not Sell My Personal Information | Accessibility Statement
ThriftBooks® and the ThriftBooks® logo are registered trademarks of Thrift Books Global, LLC