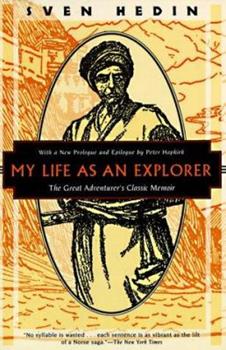 My Life as an Explorer: The Great Adventurers Classic Memoir (Kodansha Globe)

(Part of the My Life as an Explorer Series)

by Peter Hopkirk and Sven Hedin

FROM THE SILK ROAD AND TIBET, THE EPIC MEMOIR OF A BESTSELLING ADVENTURE Over the course of three decades, Sven Hedin traveled the ancient Silk Road, discovered long-lost cities, mapped previously uncharted rivers, and saw more of "the roof of the world" than any European before him. This epic memoir captures the splendor of now-vanished civilizations, the excitement of unearthing ancient monuments, the chilling terrors of snow-clogged mountain passes,...

Published by Thriftbooks.com User , 17 years ago
The Swede Sven Hedin was the last great explorer we will see on this well-traveled planet. Hedin was born in 1865 and this autobiography describes his life up until 1908. Hedin's career was hardly finished, however, as he continued to traipse down the old Silk Road in Central Asia until the 1930s when he was 70 years old. In a happy trait that should be copied by more auto-biographers, Hedin doesn't spend much time on his childhood. By the third page of his narrative he is 20 years old and off to the Caucasus Mountains which only whets his appetite for the little-known peaks and deserts of Tibet and Central Asia. He spent the years between 1893 and 1908 exploring these regions and filling in blank places on the map. National Geographic's "Traveler" magazine put this book on its list of 100 best adventure books and, truly, the tales of Hedin's adventures make for good, exciting reading. Hedin displays both charm and generosity in his account. He traveled without the company of other Europeans and he enjoyed the companionship of his local helpers and the dogs he adopted along his way. He draws many clever portraits of the people he met in his travels. Hedin, however, was no mere adventurer. He was a serious, sober scholar who produced dozens of scientific studies of his findings. One of the most hair raising tales in the book concerns Hedin's first expedition into the sands of the Takla Makhan (desert) of China in which he and his companions nearly died of thirst. A second high point of the book is the account of his attempt to visit Lhasa, the forbidden capital of Tibet. He failed after getting nearly to the gates of the city and was denied the honor of becoming the first foreigner to visit Lhasa in half a century. Amidst the plethora of adventures, the stoic Swede brushes over incidents others would consider high -- or low -- points of their lives. "Fever kept me in Kashgar a long while" is his complete description of one serious illness. The book is illustrated with many of Hedin's drawings, including his hand drawn maps. I suggest that you read the book with a good modern map at hand so as to trace his routes with more precision as his constant tooing-and-froing can be confusing. Smallchief

Published by Thriftbooks.com User , 18 years ago
(This refers to the National Geographic Reprint edition)This is truly a great book, full of the amazing adventures of an incredible explorer. You have to admire Hedin's determination and stubborness, although sometimes I wonder about his planning. It seems like every trip all his animals die, and the men are on the verge of starvation. And as for his trips in the desert, I would have thought the concept of "take some extra water" would have occured at some point! Hedin is a fine writer, and his descriptions are not only accessible to the average reader, but often quite poetic as well.Nevertheless, I only reluctantly give this a full 5 stars, because I feel that National Geographic missed a great opportunity to make this an almost perfect book, and it wouldn't have been that difficult to do. As a previous reviewer mentioned, some good maps could have helped. There's almost no excuse for NG not to have included some decent maps of Central Asia in their edition. Furthermore, one tends to forget (although Hedin mentions in the text), that he also took photographs on many of his travels. These might have been included as well. (To see some, refer to the Photos section of the website of the Sven Hedin Foundation, "http://www.etnografiska.se/hedinweb/htmsidor/organi.htm"). Aside from the simplistic drawings that are included, Hedin also did many detailed sketches and potraits on his travels. Now one can assume that none of these were included in the original, and this is only a reprint, but nevertheless, it is a missed opportunity. The introductory chapter by A.Brandt also adds little insight, and might as well have been left out as well.However, despite the lost opportunities, this book is highly recommended.

Published by Thriftbooks.com User , 20 years ago
This is a tale wonderfully told of an explorer's quest to fill in the blank spots on the map of Asia. Not only does Hedin present a clear and highly entertaining view of his travels, but he also gives us a portrait of his character. He shows us that he is a man with high goals and is undeterred in achieving those goals, even when all odds are against him. He shows us that he is also a very caring man, very much concerned about the welfare of his men and his animals. He also is a man that is awestruck by nature and is very concerned about not unduly intruding upon it or unnecessarily destroying it.But most of all, this is an adventure story that is just plain fun to read.A suggestion to readers who are not very familiar with the geography of central Asia would be to have on hand some good maps as the ones Hedin draws are quite limited and often fail to give the perspective that may be desireable.

The best travel book I have read too.

Published by Thriftbooks.com User , 22 years ago
I concur with NDylanRay@aol.com. This book is exceptional. I could hardly put it down. You feel the excitement and intensity of his adventures, you begin to understand the force that drives him (and you respect him for it), and you meet the people and the places that make Turkestan and Tibet 100 years ago like no place that you could ever imagine.

The best journal of exploration I have ever read

Published by Thriftbooks.com User , 22 years ago
Sven Hedin's "My Life as an Explorer" is an exceptional work. Stylistically situated somewhere in between scholarly works such as those by Aurel Stein and pure "adventure for its own sake" works such as those by Thesiger, Hedin's explorations are astounding and wonderful stories. His bravery and thirst for adventure are unmatched--he seems to have a total inability to turn back from his goals. Yet the goals are noble, and his methods meticulous and scholarly, so one is not left with the impression that he is simply a daredevil seeking thrills. He singlehandedly filled in, in a fairly detailed manner, one of the last white spaces of "terra incognita" on the map of the world. At certain moments in the book, especially (in my opinion) the discussions of the Lama Rinpoche, who vows to remain walled inside his cave for his entire life, Hedin's narrative reaches the heights of great literature, placing his work, I believe, among the greatest travel or exploration writings ever produced.
Trustpilot
Copyright © 2022 Thriftbooks.com Terms of Use | Privacy Policy | Do Not Sell My Personal Information | Accessibility Statement
ThriftBooks® and the ThriftBooks® logo are registered trademarks of Thrift Books Global, LLC