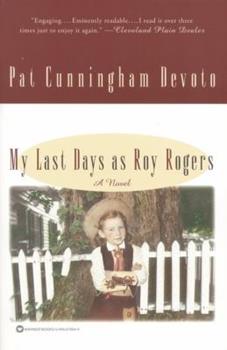 My Last Days as Roy Rogers

In an Alabama town in the early 1950s during the last polio summer before the Salk vaccine, ten-year-old Tabitha Tab Rutland is about to have the time of her life. Although movie theaters and pools have been closed to stem the epidemic, Tab, a tomboy with a passion for Roy Rogers, still seeks adventure with her best friend Maudie May, the lightest brown colored person she knows. Now as they meddle with the local bootlegger, Mr. Jake, row out on the...

I loved this book -- a very memorable book

Published by Thriftbooks.com User , 19 years ago
Even after a month has passed, I still find myself thinking of this book, and when I was reading it, I couldn't put it down. Devoto tells a story of childhood in the South (northern Alabama) in the early 1950s, where fear of polio and segregation were pervasive realities. 8-year-old Tab (Tabatha) is friends with a boy whose mother, fearful of polio, makes him stay in the basement while she's at work. Tab's other friend is Maudie May, a 13-year-old "colored" girl whose younger twin brothers (known only as the Brothers) tag along around, kept in check by their strong-as-iron older sister. It is a time when children really were free to spend their summers with little adult supervision during the day. As a result Tab and her friends have some amazing and funny adventures, including an unforgettable episode on the Tennessee River in a rickety rowboat they've borrowed. I laughed out loud at a number of points in this book, both from the funny situations and the funny commentary by Tab.This book is a keeper.

Published by Thriftbooks.com User , 20 years ago
This book reminded me a lot of my childhood. Long summer days, Roy Rogers, the polio scare, hideouts, and long-lost childhood friends. It is the story of Tab Rutland who lives in a small Alabama town in 1954. The 1954 polio scare is on, and all of the swimming pools are closed in the town. So with her new friend, Maudie (who is the daughter of the neighbor's African-American maid) they set about to build a fort in a kudzu vine thicket which they nickname Fort Polio. They then begin a summer spying on the local moonshine maker, taking a fishing trip to get money for school supplies for Maudie, Tab's friendship with her neighbor's son, John (who is brilliant in his own right), in addition to other adventures. Meanwhile, Tab's mother is blackballed by the venerable Ladies Help League and especially by the head of the League, Mrs. Grace Poovey. But the summer ends--and what happens to Mrs. Poovey? And--what happens to Maudie and why does she have to leave town? This is a wonderful coming-of-age novel set in the 1950s and those have grown up in this time period will enjoy this book immensely.

Published by Thriftbooks.com User , 22 years ago
This is one of those books I wish that didn't have to end. It a shame that this is Devoto's only novel because I would love to read other works by her. She is extremely talented. After reading this book, I have been searching bookshelves for something of the same quality but nothing compares. Although, I did not grow up in the fifties, I can still relate because Devito portrays her story as truly from the eyes of a child. And several instances made me recall my own childhood. Also, the historical detail was exceptionally interesting. The polio vaccine, segregation, and other parts of history were portryed in way that anyone with an ounce of humanity can relate to.

Published by Thriftbooks.com User , 23 years ago
From debating the merits of Roy Rogers over Gene Autry to building fantastic forts, from being afraid of catching polio to being adventurous enough to tackle local mysteries...the only thing missing from My Last Days as Roy Rogers was trading comic books and eating all the banana pudding I wanted. Pat Devoto lived in a world parallel to mine (is it true we all have a twin?). Ruleville, Mississippi, in the 1950s had the same quirky characters, the same colorful dialgue, and all those old familiar places that have held a lifetime's worth of excitement.

Published by Thriftbooks.com User , 24 years ago
An extraordnary first novel. Devoto has captured a childhood that is everyone's secret dream. A childhood of confident, bold innocence played out against a dark background of adult fear of the unknown predator that was polio. All of the elements that made 1950's Alabama are filtered through her heightened sense of drama and intrique. I have never felt so much a part of a child's world. Highly recommended....a real joy!! I will be the first in line to see the movie.
Trustpilot
Copyright © 2022 Thriftbooks.com Terms of Use | Privacy Policy | Do Not Sell My Personal Information | Cookie Preferences | Accessibility Statement
ThriftBooks® and the ThriftBooks® logo are registered trademarks of Thrift Books Global, LLC