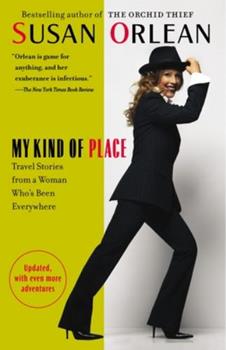 My Kind of Place: Travel Stories from a Woman Who's Been Everywhere

New Yorker writer and author of The Library Book takes readers on a series of remarkable journeys in this uniquely witty, sophisticated, and far-flung travel book. In this irresistible collection of adventures far and near, Orlean conducts a tour of the world via its subcultures, from the heart of the African music scene in Paris to the World Taxidermy Championships in Springfield, Illinois--and even into her own apartment, where she imagines a very...

Don't judge a stiletto by its cover

Published by Thriftbooks.com User , 15 years ago
Don't let the cover of this book fool you. Susan Orlean does NOT travel to the many crevices of the earth in stiletto heels. At a wedding/skeet-shooting party in Scotland, she "was tripping around in rubber flip-flops." In Hungary, she walked around the Thermal Hotel Aqua in rubber thongs and "dangled from a sort of traction device at the deep end of the thermal pond." In all honesty, despite the cover's subtitle--Travel Stories. . .--some essays are not necessarily tourism tales. One certainly could not plan an itinerary with this read. But don't let that taint the experience. As Orlean would say, the educational paths she leads us on are journeys in and of themselves. She delves into the world of the offbeat with class, going places I certainly would pass up in this lifetime. The Southern Charm Beauty Pageant, Thomas Kinkade's Signature Gallery mega-art reproduction enterprise, and the Midland, Texas Petroleum Club to name a few. She has done all of it with respect and gratitude. She even finds fascination within the SkyMall, that catalogue tucked away between the knees and the airline barfbag. You've got to appreciate this woman's stamina. For those among us who are guilty of skipping The New Yorker articles and heading right for the cartoons, these essays will be fresh reads. Though not mentioned on the cover, 85% of the book's writings have appeared in that publication. But for the uninitiated among us, the reader will find a lot packed into this bundle. In fact, Random House could have taken these random essays, created a second book out of the last section and removed an awkward conflict of theme and genre in the process. And though the book's title is on the weak side and less than memorable, the essays reflect an individual who is hardly forgettable. Her observation skills are entertaining. She includes background history and cultural notes--all appreciated. She carries on a satisfying combination of journalistic curiosity, objectivity and wit. So, don't judge this particular book by its cover. Susan Orlean has so much more to offer inside.

Published by Thriftbooks.com User , 16 years ago
Susan Orlean is an outstanding author and reporter. I love her style of composing well-written, sometimes humorous, always perceptive accounts of offbeat subjects that most reporters would never think of covering. She bravely enters new worlds with a very objective mind and an exceptional pen. I highly recommend this book of short stories, as well as her other books. Don't forget to look in the New Yorker for her articles (like this week Feb. 14 & 21, 2005).

A good collection of vintage Orlean

Published by Thriftbooks.com User , 16 years ago
Susan Orlean's third collection of essays includes thirty pieces that were previously published, most of them in The New Yorker, between 1990 and 2003. Orlean explains that the essays she chose for the book are connected in that the sense of place in them is especially important: "When I wrote these pieces, the sense of where I was--of where the stories were unfolding--seemed to saturate every element of the experience, to inform it and shape it, and to be what made the story whole." In some cases the importance of location to an essay will be apparent to the reader, as for example Orlean's piece on the student president of Martin Luther King Jr. High School in Manhattan ("Madame President"). But in other cases the reasons for the author's inclusion of an essay are not apparent. Readers, at any rate, are unlikely to care whether the essays are connected to one another by a meaningful theme. Orlean divides her book into three sections: "Here" includes essays set in the United States; those set abroad--from Cuba to Hungary to Thailand--are included in "There"; and "Elsewhere" is a hodgepodge of mostly short (some as brief as two pages), mostly whimsical essays set in any number of places. Orlean's modus operandi is to observe her subject for a length of time--spending a week or two, say, walking the aisles of an independently owned grocery store in Jackson Heights, New York, interviewing its managers and employees, watching the parade of hair-netted housewives and pierced teenagers and hand truck-pushing delivery men who flow in and out of the store ("All Mixed Up"). And then she writes about the experience in plain prose, and through the accumulation of ostensibly mundane details--sometimes, truth be told, a few too many mundane details--she brings her chosen slice of society alive for readers. Sometimes Orlean is introducing us to unfamiliar terrain, to the resting stations that punctuate a climb up Japan's Mt. Fuji, for example. But Orlean's essays are no less interesting--are indeed often more interesting--when she focuses on the familiar: among my favorite essays in this collection is "We Just Up and Left," the author's description of a trailer park in Portland, Oregon, the sort of place one can drive by for years without noticing. Other noteworthy pieces in My Kind of Place are "Royalty," detailing the author's investigation into the curious abundance of royally-named papaya stores in Manhattan (Papaya King, Papaya Prince, Papaya Kingdom); "Art for Everybody," a look inside a Thomas Kinkade (the Painter of Light!) Signature Gallery; and "The Congo Sound," an essay about an African music store in Paris, France. Fans of Orlean's will find more morsels to savor here. Readers who have not read Orlean previously can start here or might, better yet, read the work for which she is best known: her book The Orchid Thief is itself very much about a place--Florida--as well as the orchidophiles who populate it. Just don't expect the book to resemble i

Traveler in a Strange Land

Published by Thriftbooks.com User , 17 years ago
Susan Orlean's new book is one more argument in favor of the theory that all writing is travel writing. Most of the pieces in My Kind of Place have appeared in The New Yorker Magazine and others. They cover a wide range of offbeat topics. Since these articles are all over the map, so to speak, you may end up picking and choosing. Some are very short and personal, others are longer and more journalistic. Some of my favorites were the piece on baby beauty pageants, in which Orlean brings out the rather creepy aspect of such contests very subtly; the taxidermy convention, also a surreal occasion; and a stay in Midland, Texas, a dusty oil town whose claim to fame is being the hometown of George W. Bush. Orlean's travels outside the States were also good, just not quite as interesting as when she explores the weirdness that exists in our own back yard.

Compelling against my will.

Published by Thriftbooks.com User , 17 years ago
This is a book of short stories. I don't especially like short stories. Her stories tend to describe small events and everyday people. I look for large important things. I want a beginning, a middle and an end. These stories tend towards being unforced and open ended. But when I wake up at 3 AM, as I did this morning, to read a few more of her stories, I know I'm a fan and I want people to know about this book. I love it when I like stories I'm not interested in. Most travelers observe places as they go by in comfort and safety. They look for towers and cathedrals and the biggest and the most expensive. The locals are typically barriers that keep them from their quest of finding things to talk about when they get home. Susan travels to find people who can gave her pieces of interesting things that happen so that she can put them together as her travel stories. I've traveled some too, mainly for my work. How I wish that when I get home my writings are even a fraction as compelling as hers. But what catches me most in her stories is the vision I have of Susan traveling into places most tourist don't see. Openly sharing her thoughts with strangers AND listening to theirs. All the while flashing a mop of red hair from atop of a slender frame.
Copyright © 2020 Thriftbooks.com Terms of Use | Privacy Policy | Do Not Sell My Personal Information | Accessibility Statement
ThriftBooks® and the ThriftBooks® logo are registered trademarks of Thrift Books Global, LLC