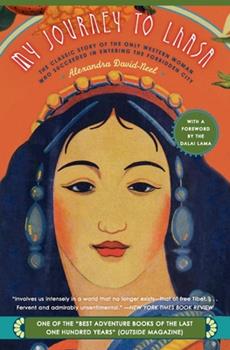 My Journey to Lhasa: The Classic Story of the Only Western Woman Who Succeeded in Entering the Forbidden City

An exemplary travelogue of danger and achievement by the Frenchwoman Madame Alexandra David-Neel of her 1923 expedition to Tibet, the fifth in her series of Asian travels, and her personal recounting of her journey to Lhasa, Tibet's forbidden city. In order to penetrate Tibet and reach Lhasa, she used her fluency of Tibetan dialects and culture, disguised herself as a beggar with yak hair extensions and inked skin and tackled some of the roughest...

My Journey to Lhasa

Published by Thriftbooks.com User , 3 years ago
Great book. Glad I read it. Another book I recommend Tomboy Bride.

The Pilgrim was a Lady

Published by Thriftbooks.com User , 15 years ago
In 1923 at the age of 55, Alexandra David-Neel put on the robes of a Buddhist monk and walked across Tibet for four months on a pilgrimmage to the holy city of Lhasa. No European woman had ever entered the holy city before, and the road promised many dangers, from wild animals to blizzards to bandits. Her descriptions bear witness to a spunky evolved soul whose scholarly knowledge of Buddhism served her well in her adopted role as an itinerant monk. Her writing is elegant, punctuated by an unselfconscious humor and relentless perspicacity. Truly an adventure trek of many wonders.

An unusual journey to say the least

Published by Thriftbooks.com User , 17 years ago
When I was reading the reviews of this book, I was struck by the one of the reviews. It was very negative, and the reviewer missed the beauty of this book entirely. I was glad that I had already read it. I read the reviews because I was curious to see if others had enjoyed the book as much as I did. I was buying it again as a present for a friend. The author was a very unusual person, and this book is very much worth the read. She wrote about customs and values honestly as she saw them. She was not a dispassionate viewer, but I also felt that she was not judgemental or superior. When customs of two peoples are as different as some of Tibet and France are, they will shock a person and that person will remark. However, I felt that she loved and respected the people she wrote about, and she did a remarkable job in recounting what she saw. She gave her readers the pleasure of a most unusual journey with her and her young companion through a country that was worth writing about.

A woman traveler makes to lhasa

Published by Thriftbooks.com User , 21 years ago
My Journey to Lhasa is a marvellous, cliff hanging tale of adventure comparable to Lawrence of Arabia's epic account. David-Neel made her trek to forbidden lhasa in the dead of winter succeeding where much younger, better equipped male explorers failed. Her thrilling yarn is the main highlight of a 101 year adventure packed life.This noted Buddhist scholar wrote 25 books on eastern themes after she made her death defying trip in her mid fifties. Although naysayers have claimed that David-Neel never went to Lhasa, our extensive research for our biography the Secret Lives of Alexandra David-Neel authenticates her travels as well as fleshes out the human aspect of this amazing character who Lawrence Durrell called "the mot astohishing Frenchwoman of our Times."

Published by Thriftbooks.com User , 23 years ago
This story of a solo woman, over 50, travelling in a strange country in the early 1900's should be read by every woman who is wondering if they dare travel anywhere. Once you read Alexandra's story of her journey to Lhasa in Tibet, you will never be afraid to travel anywhere in the world. Her incredible courage, her determination and her love of Tibetan people and culture make this one of the best reads in a very long time.
Copyright © 2020 Thriftbooks.com Terms of Use | Privacy Policy | Do Not Sell My Personal Information | Accessibility Statement
ThriftBooks® and the ThriftBooks® logo are registered trademarks of Thrift Books Global, LLC