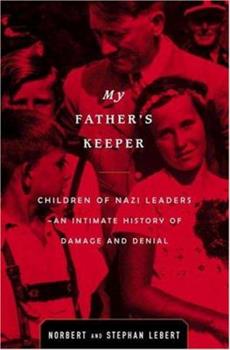 My Father's Keeper: Children of Nazi Leaders-- An Intimate History of Damage and Denial

by Norbert Lebert and Stephan Lebert

My Father's Keeper is a uniquely illuminating addition to the dark literature of the Nazi era. In 1959 the German journalist Norbert Lebert conducted extensive interviews with the young sons and daughters of prominent Nazis: Rudolf Hess, Martin Bormann, Hermann Goring, Heinrich Himmler, et al. Forty years later, Lebert's son Stephan tracked down these same men and women to find out how they had lived their lives in the shadow of a horrifying heritage...

Published by Thriftbooks.com User , 15 years ago
I read this book in German. In the original, the substance is fascinating, but the writing was terrible, and the layout of the chapters was confusing and counter-intuitive. This book needed more extensive editing. I hope that in the translation, some of these problems were fixed. Reglardless, this is a highly interesting book and a must-read in spite of its flaws.

Published by Thriftbooks.com User , 18 years ago
This book is a must read for those interested in the Nazi leaders. I found some of these children's views most disturbing, especially the refusal to face the truth of what their fathers did (with a few exceptions). What is amazing is the pity party some have telling of the awful prison/camps they were submitted to after the war. Their post war treatment cannot compare to those who suffered in the death camps under the Nazis. The author is very objective in his opinions and observations. I highly recommend this book for those interested in this subject.

Published by Thriftbooks.com User , 19 years ago
This book struck a deep chord in me as a South African. It was an unsettling and thought-provoking read. We also have a dark icky past, and frighteningly the theme of guilt-by-pedigree, and of therefore trying to forget the past, trying to pretend that it all never happened, is familiar. SA right now is going through the same process, although not to the same extent. It's downright creepy. I won't forget the book in a hurry!

Paying For Their Parents Sins?

Published by Thriftbooks.com User , 19 years ago
Stephan Lebert's famous interviews with the Children of Nazi Germany's leaders are told in this book. The Children of Himmler, Goering, Hess, and a few others gave their side of the story, some reluctently, others freely to the interviewer.All have a story to tell and in some cases use the interviews as a means to push for their father's innocence while others really don't care what their parents did. They are of course totally blameless of their parent's actions and in some cases want to be left alone. Sadly the old addage "Guilty by association" is what these people (and their offspring) will have to endure for the rest of their lives.

Published by Thriftbooks.com User , 19 years ago
Unlike many books on this subject, the Leberts do not fall into the ponderous trap of attempting to be definitive or all things to all people. I stumbled across this remarkable book by accident. Posner's book 'Hitler's Children' was interesting, and is a more exhaustive look at the topic, but Lebert's book is somehow more emotional and accessible. Perhaps it is the lighter touch or the fact that it was written by Germans but it stayed in my mind much longer. Based on a series of articles his father wrote in 1959, the son meets with those who will speak with him and explores his own feelings about his father's role in the war, his identity as a German, and the reaction modern day Germany has to it's war past. While there are tidbits of information (I had no idea there was a charity set up to support former Nazi leaders and staff or that so many of them entered the postwar government so cleanly) the real value of this book is the human one.How rare it is to find a father and son so willing to face the possiblities of their post-war life having been stunningly different and how refreshing to find them willing to allow that experience had an effect on their interviews. The portraits of the Nazikinder then and now are done with great appeal. This is a subject too emotional to ever truly be objective about, but the willingness of the Lebert's to try and their look at where they fail does thenm credit. This is a popular history in the best sense of the phrase that will leave you with a great deal to think about regarding modern Germany and the way the world views these heirs. If many of them have seemed to fall into their father's paths, was it inevitable? Is our own denial to the unique challenge they faced culpable? (If understandable). Is the current rise in their views tied to these things? A great read for the casual and a thought provoker for the more involved. This book deserves a wider audience.
Trustpilot
Copyright © 2022 Thriftbooks.com Terms of Use | Privacy Policy | Do Not Sell or Share My Personal Information | Accessibility Statement
ThriftBooks® and the ThriftBooks® logo are registered trademarks of Thrift Books Global, LLC