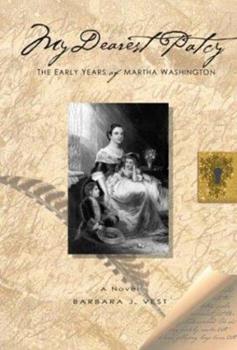 My Dearest Patcy: The Early Years of Martha Washington

My Dearest Patcy is the story of Martha Washington before her marriage to George. It is a love story of two people whose perseverence and devotion overcame all barriers but death. And it's the story... This description may be from another edition of this product.

Published by Thriftbooks.com User , 17 years ago
The author has done so much more that just write a book. This could be used as text book for history classes as well as an interesting and thought provoking story that everyone should read. Ms. Vest has obviously invested a considerable amount of time and energy in it's writing and publication and the story line makes you want to continue reading and makes it almost impossible to put down. The interweaving of Martha's life into the hardships, interpersonal relationships and history of our country during those times makes it a "must read" book.

Published by Thriftbooks.com User , 18 years ago
My Dearest Patcy: The Early Years Of Martha Washington is a unique and superbly written historical novel about Martha (Patcy) Dandridge, the woman who would met and marry George Washington as her second husband and become the First Lady of the newly formed United States of America. Author Barbara Vest has created a remarkable and erudite novel of history and romance with meticulous attention to historical background and detail including the story of her first marriage, a match made of love between herself and the aristocratic-blood Daniel Parke Custis, against the will of Custis' father - only her first husband's untimely death could cut short their bond. Yet as a twenty-eight year old wealthy widow with two surviving children, she would persevere past grief, and one day make her contribution to history. A rapturously told portrait of a strong and truly remarkable woman.

What a Charming Book!

Published by Thriftbooks.com User , 19 years ago
My Dearest Patcy tells a long-awaited story of a figure of history we never knew before. This well-told story gives a charming picture of Martha Washington before she became Mrs. George W. This is a novelist with a talent for uncovering the person behind the legend. An enjoyable book!
Trustpilot
Copyright © 2022 Thriftbooks.com Terms of Use | Privacy Policy | Do Not Sell My Personal Information | Cookie Preferences | Accessibility Statement
ThriftBooks® and the ThriftBooks® logo are registered trademarks of Thrift Books Global, LLC