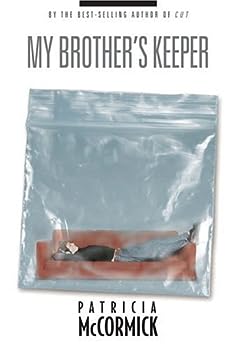 This description may be from another edition of this product. From the acclaimed author of Cut comes this new novel that explores the anguish of living with divided loyalties and the cost of keeping family secrets, as a young teen struggles to keep his family...

Published by Thriftbooks.com User , 14 years ago
Imagine that your brother one of the most prominant young athletes throws it all away for drugs. That is the problem that Toby faces in My Brothers Keeper. Jake is the best athlete in town and maybe even in the city, he is great at baseball and other sports but Toby becomes suspicious when he hangs out with the wrong people and he starts changing. He does not care about anything anymore and gets all mopey. When Toby flushes a bag of Jakes Marijuana down the toilet Jake sells Tobys most prized posession to get money for the drugs back. To see if Toby can help Jake go back to his old self you have to read this good book. I thought that this book was good because it showed very good real world problems that can be happening every day. Having your stuff stolen and then sold is something many people have to go through because of how addictive drugs can be. People are careless about everything else when it comes to drugs and this book is a great example of how careless they can really be. This book is such a great example of how people can change because of such a silly thing like drugs and I believe that people whould put time aside to read it I would reccomend this book to teenagers because it can help show them how dangerous experimenting with drugs can be. The book shows what a person will do to get drug money and also the repercussions of what happens after your able to get the money. I think that if teens who are thinking about using drugs read this they will choose to stay away from them because of what happens. I would also reccomend this book to people that like dramas and people that like books where a family member has to help another overcome a bad time of their life.

Published by Thriftbooks.com User , 14 years ago
A brother's love is a brother's love: one of the many truths to life and family. In MY BROTHER'S KEEPER, Patricia McCormick tells a sharp tale of the often too-complex relationships between brothers, and the unspoken feelings and subtleties of such a fragile thing. Toby idolizes his big brother Jake. Jake's the typical big brother figure; cool, funny, charming, and the school baseball team stud. But things don't always turn out to be as great as they appear on the surface. Internally, there are struggles. Toby's father has left their family to search his fortune elsewhere and has seemed to cease all contact with them. His mother is distant and has taken a stance of resignation. And to complicate the situation even more so, inevitably past Toby's endurance, Jake has fallen into a rut he cannot get out of. The world of drugs. Now Jake doesn't seem to be around as much anymore. He leaves the house, returning in the middle of the night faded and disillusioned, leaving the responsibility up to Toby to clean things up, make everything seem fine, and to smooth away the creases. But when Jake finally goes too far, will it be up to Toby to decided how to handle things? Will he rat his brother out, breaking the cardinal rule of the big-brother/little-brother relationship, trespassing on regions of brotherhood Toby has never touched upon? McCormick creates a completely believable and down-to-earth narrative of internal struggles in the mind of a growing boy's problems in not only the broader family unit, but also the profound nuances of the complicated structure of kinship between siblings. Not only that, but she manages to keep it lighthearted at the right moments, as well as comedic at others. Cheers to P.M. Reviewed by: Long Nguyen

Published by Thriftbooks.com User , 16 years ago
By:Eric Evans Once again Toby is cleaning up all the mess his brother and his friends make when they're high off drugs. This time they ate all the food in the cupboard. Toby cleans it all up and sprays Magic Citrus to kill the smell. This isn't the first time that they have made a wreck of the house after being high. Sometimes Toby's brother Jake has come home high at eleven `o clock. Not only this but Toby `s mom has had a depression or "constant headache" mood every since they're father left. Toby has a little brother named Eli that he constantly watches. One day Toby can't take his family sinking lower and lower every day so he steals the bag his brother keeps his drugs in and flushes them down the toilet. When Jake finds out he steals Toby's prized possession. He steals his Stargell Pittsburgh Pirates rookie card. After this Eli goes missing. Now everything comes together again. There are some cops that come to Toby's house that drop off Eli and say they found him near the highway. Just as Toby's mom is being informed by the cops about Eli the phone rings and a man says Jake has been caught with drugs. Jake has a day out of juvenile for court and that night Toby and their family have the orange meal which is this dinner Toby and Jake thought of it is made of mandarin oranges, macaroni n cheese, and Cheetos. I would recommend this book to a lot of people because it is so close to reality. Think of all the little brothers who have big brothers whom do drugs, but don't get their brothers help because they are scared. One reason I like this book was because of how realistic it was. Toby in the story loves his brother, but is fearful of telling someone because he knows the consequences and doesn't want to do that to his brother. Also at the same time he has another little brother he has to watch over all the time because their mom works a lot. This is because their dad left their mom a while back to go to California. Now their mom is trying to find another guy to fall in love with. The reason I call this book realistic is because you can see that this situation is a combination of everyday problems for children growing up. For some reason you can't put this book down; it isn't left at suspense at the end of the chapter, but it keeps you into the book. You want to know if on the next page Jake gets caught, if Toby tells on him or if he gets away with it. Then not only do you want to know about that, but you want to know what is going on with Toby's personal life for example if he makes the baseball team. Another reason the book is hard to put down is because tension builds and builds on Toby between all these issues then everything falls apart and brings the family closer together. Another thing I like about the book is the ending and how things from the beginning piece together with things from the ending. For example how they mentioned old hobbies of Jake that Toby is now interested in. Also how they mentioned the orange meal. I thoug

A moving story of love and family grief

Published by Thriftbooks.com User , 16 years ago
Tony's love for his older brother, the cool personality, is affected by his father's departure from the family as Toby observe his family falling apart. Jake is slipping into drug use, and Toby tries to save face by covering it up - until tensions between the two brothers escalate. My Brother's Keeper is a moving story of love and family grief evolves.

Published by Thriftbooks.com User , 16 years ago
Mine loved it. In fact they read it in one sitting, laughing and smiling even though it was kind of a tough subject. (Younger brother who idolizes older brother takes action when older brother slips into drugs...) If I hadn't read - and LOVED! - CUT, Patty McCormick's first bestselling book, I might not have been so trusting. But CUT was a fantastic book, the kind you can't wait to tell your friends about. My then 13-year-old daughter and her friends devoured it in one week. Same thing with MY BROTHER'S KEEPER. Stick it in your kids backpack for summer camp. They'll be pleasantly surprised.
Copyright © 2020 Thriftbooks.com Terms of Use | Privacy Policy | Do Not Sell My Personal Information | Accessibility Statement
ThriftBooks® and the ThriftBooks® logo are registered trademarks of Thrift Books Global, LLC