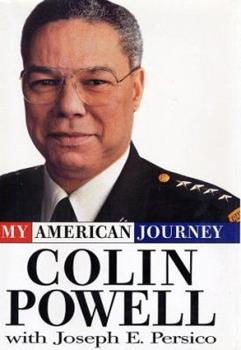 "A GREAT AMERICAN SUCCESS STORY . . . AN ENDEARING AND WELL-WRITTEN BOOK." --The New York Times Book Review Colin Powell is the embodiment of the American dream. He was born in Harlem to immigrant parents from Jamaica. He knew the rough life of the streets. He overcame a barely average start at school. Then he joined the Army. The rest is history--Vietnam, the Pentagon, Panama, Desert Storm--but a history that until now has been known only on the...

Published by heath , 1 year ago
it was a better read then i anticipated. the little moments of discovery are well conveyed and make him seem "even" in many respects to average citizens but his experiences as recounted really illuminate the world we live in as imperfect accented by his interesting insights along the way. he makes everything more understandable in the grand scope of things with his perspective of a normal guy in unusual situations approach to story telling. overall very well written,...touching and frustrating and inspiring all at once. he's likable.

There must be something about Colin Powell...

Published by Thriftbooks.com User , 16 years ago
There must be something about Colin Powell. All through his career his superiors continually sought him out; and wherever he worked they always wanted him back. At various points he served as military assistant in the Defense Department to powerful figures as Charles Duncan, Graham Claytor, Frank Carlucci and Casper Weinberger; but he always yearned to return to his first love and what he felt was his primary responsibility - commanding troops in the field. And a few times he did make it back to the barracks, but soon his old bosses would be back on the phone again, urging him to return to Washington. Once it took the personal request of the president of the United States himself, Ronald Reagan, for Powell to finally agree to return. Why was Powell in such high demand? I believe it had something to do with his character, and the fact that he must have been very capable. Ultimately, he did rise to the pinnacle of his profession as a soldier, becoming Chairman Joint Chiefs of Staff of the United States Armed Forces. Not bad for a black man who struggled with grades such that he had to switch courses midway to avoid getting kicked out of college. Powell went on to blaze many trails and attain success many would have thought unimaginable - marrying a very beautiful wife in the bargain. His story, told in this insightful book, illustrates how the most basic of values such as character and commitment, can carry a person into the loftiest realms of achievement. "...Behold a man skilled in his craft; he shall stand before kings, and not before mean men."

One of the most Educational Books I have ever Read

Published by Thriftbooks.com User , 19 years ago
An American success story if there ever was one. Colin Powell vividly depicts his extraordinary life and career that could only take place in the setting of America. This autobiography wheels you through life in the poor neighborhoods in the Bronx to Washington Power broker. Colin Powell takes you though his life through his eyes, and into history, in some ways while reading it, I felt as though it was Forrest Gump on steroids, but the story is true. Anyone interested in the policymaking process should read this book, as Powell describes his role as well as the role of other American leaders in making some of the most crucial decisions, the reader is swept into the pressures and challenges faced with America's leaders on a daily basis. The book delivers an account into the lives of Dick Cheney, George Bush, Ronald Reagan, and others, allowing you to take a more personal look at American leadership. It is so easy to criticize from the outside looking in, but usually criticism as well as praise, is done by the uninformed.One aspect I found particularly educational was how Powell provided a small glimpse to me (A young white male) of an educated man, a commissioned officer of the United States Army, refused service in restaurants, and discriminated in others ways. It is a credit to Powell, how he rose above narrow-minded bigotry and focused on the positive; resisting the temptation of "victimization" to become one of the most powerful and respected men in the country. I recommend this book to anyone, black, white, Latino, male, female, liberal, or conservative.

Stay on Your Journey

Published by Thriftbooks.com User , 20 years ago
Here's man who rose from the South Bronx to a rightful place in leading foreign policy. This biography was written before his becoming Secretary of State. And it probably contributed well to his political career. But as an army veteran, I was more drawn to the many challenges that Colin Powell had in Vietnam, and with conflict amongst the ranks. I was also compelled to ask myself about the challenges that his wife must have had, and probably still has in being his better half. There is such a role to play out, to be part of this journey. And while Powell doesn't go into depth about this, he does address the commitment that he made to his wife, regarding a stable home life. I also noticed, in between the lines, so to speak, that, like Norman Schwartkoff, Colin Powell grew up with some pretty "strict" parents. And it was not what he experienced, but what he did with what he experienced that has made Colin Powell one of the most loved leaders of this world. Read this biography to be part of his journey, and in turn to add value to your own dreams.

Living the American dream - From Bronx to the White House...

Published by Thriftbooks.com User , 21 years ago
"My American journey" is the story of Colin Powell. He is the living symbol of the American dream. Powell was born in Harlem, and grew up in South Bronx. His parents were hard-working immigrants from Jamaica. He went to school in New York, and later joined the ROTC. "My American Journey" is a very well written biography. Together with lots of pictures from Powell's personal life, from his childhood in Bronx, and ending with his official career in the White House, the easygoing writing style makes this an interesting read. I truly enjoyed learning more about the Vietnam War and the bravery of the US soldiers who fought in the Vietnam War. Additionally, after reading what Powell and Schwartzkopf experienced during the Vietnam War, I can better understand Powell's Gulf goals and actions. Previous to reading this book, I did not have a lot of knowledge about Panama and the invasion, therefore I found this part to be very interesting too.The book provides us with a great study of leadership, while it also is a good study of military history and politics. "My American Journey" is an excellent story and example that shows us what possessing a strong motivation and integrity can lead to. You certainly do not need to be an American to appreciate the positive attitudes and the message that Powell sends through his book. I highly recommend it to anyone who wants to read about an interesting life, leadership, military history, and politics.

A Book with Something for Everyone

Published by Thriftbooks.com User , 23 years ago
Historians, military leaders, intelligence (or counterintelligence) officers, or students of foreign policy (or government for that matter) need to put GEN Powell's book on their must read list. I bought the book when it first came out in hardcover, and couldn't put it down. It sits on my nightstand, and I still pick it up and read pieces from time to time. It is an amazing success story and an inspiration--as well as great publicity--for those who have been or are in the military. As a career counterintelligence officer, I find his perspective from the position of National Security Advisor during the Ronald Reagan Presidency informative and useful when taking a look back at the times. GEN Powell, I believe, was (maybe still is) sensitive to being called a political general. Truth to tell, he will probably be known for years to come as much more than that: he is unquestionably one of the greatest statesmen of our times. The US military is full of savvy officers who are comfortable in uniform and in the field but miscast in civilian clothes. GEN Powell is an officer who was equally comfortable and effective in both. Regrettably, I never had a chance to work directly for him or have the benefit of his wisdom until now. One of the finest books I've ever read. Kelly V. Denton, Dieburg, Germany
Trustpilot
Copyright © 2022 Thriftbooks.com Terms of Use | Privacy Policy | Do Not Sell My Personal Information | Cookie Preferences | Accessibility Statement
ThriftBooks® and the ThriftBooks® logo are registered trademarks of Thrift Books Global, LLC