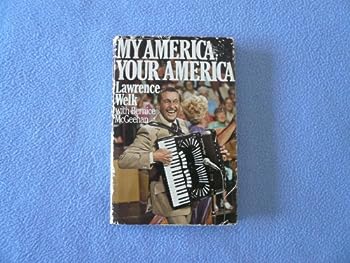 My America, Your America

by Bernice McGeehan and Lawrence Welk

Reflecting on his life, his eventual success and the remarkable achievement of his musical family, Lawrence Welk, America's best loved orchestra leader, concludes that it hasn't all been a matter of... This description may be from another edition of this product.

It's really a shame this book wasn't taken more seriously

Published by Thriftbooks.com User , 14 years ago
"My america, your america" by Lawrence Welk was written in the brutally depressing year of 1976. Mr. Welk is convinced that America will be saved when they start putting children to work. Welk was an uneducated man, but his idea was not unlike what the ancient Greeks and Florentines did, and he got it from watching young kids he trained to be professional musicians. Apprentice a kid to a great man, and they might do great things. At the very least, it makes more sense than what is done now. It also makes children into sources of wealth, rather than 30 year burdens, which is just ridiculous on every level. Children, like adults, need structure, work, activity. They also need play, creative stimulus and freedom. What do kids get these days? Kids get boredom, jail-like conditions and video games. School is abysmal. Any child of spirit would rebel against the horror that is school from first through twelfth grade, let alone teenagers, who are really (or should be) young adults. The only people who can tolerate school are neurasthenics, bums and narcs. School has always been bad. It isn't that we don't pay the wretches who man these meat grinders enough money to get quality people as teachers. It isn't even the horrific bureaucracy which has ruined everything that is good about school (and anything else it touches). The whole idea is stupid. It's jail. Schools are designed for a very short part of the industrial age, where workers were expected to be compliant, civil, and have a basic education (up to, say, the 6th or 8th grade). Extending school to "high school" was a sort of utopian idea. In those days, that meant everyone had a right to what is now considered a college education. In those days, about as many people actually graduated from high school as presently graduate from college (30% or so). Now, what happens is the morons stretch out what used to be an 8th grade education to the 12th grade, and college education is what used to happen in high school. If school did 1/10 of what its advocates claimed, I'd be all for it. But the fact of the matter is, people emerge from 4 years of high school, and even 4 years of Ivy League College without knowing Xenophon from Xylophones. People who learn stuff are curious; not educated. Meanwhile, most training is on the job anyway. Of course, none of this will happen. School is big business. How big? $620 billion dollars in 1999 to keep the young and vital portion of the populace stupid and in jail. Inflation and population adjusted, we only spent 1/3 of that in 1960. School now costs 3 times what it did then. Did we learn 3 times as much stuff? I doubt it. Most of what is taught in school now a days isn't even knowledge; it's not even political indoctrination, like right-wingers say. Mostly, it's just playing at learning stuff. If you're working, you need to learn certain things, and so those things get learned. Benvenuto Cellini became one of the greatest artists in the western world after working a s

Published by Thriftbooks.com User , 18 years ago
Lawrence Welk, mild mannered purveyor of MOR pop, right? Wrong. In this strange volume Welk puts aside the batton, takes off the gloves & reveals his own ironclad strategy for putting America back on the path to greatness. Welk draws on his own humble beginnings, his personal hardships, & hard won victories, to present a schematic for how anyone willing to work hard & stay the course can ultimately prevail in a country such as ours. Welk had a reputation as a harsh taskmaster. Read My America, Your America, & you'll understand why.
Trustpilot
Copyright © 2022 Thriftbooks.com Terms of Use | Privacy Policy | Do Not Sell My Personal Information | Cookie Preferences | Accessibility Statement
ThriftBooks® and the ThriftBooks® logo are registered trademarks of Thrift Books Global, LLC