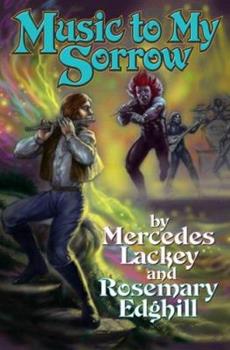 Music to My Sorrow (Bedlam's Bard)

(Book #7 in the Bedlam Bard Series)

by Mercedes Lackey and Rosemary Edghill

Eric Banyon, known as Bedlam's Bard, managed to save his young brother Magnus from what seemed to be a killer demon, but now he must rescue Magnus from their tyrannical parents. Eric does not look forward to the custody battle, but his friend Ria heads a high-powered law firm, and in a pinch he can use bardic magic to fudge a DNA test. But Eric doesn't know that his parents are allied with evangelist Billy Fairchild, himself a tool of the evil Unseleighe...

Published by Thriftbooks.com User , 15 years ago
Music To My Sorrow (2005) is the sixth novel in the Bedlam's Bard fantasy series, following Mad Maudlin. In the previous volume, Eric Baynon had rescued his younger brother Magnus as well as Ace Fairchild from the streets of New York City. At the same time, Eric had offered sanctuary in Elfhame Misthold to Jachiel ap Gabrevys and his protector Rionne ferch Rianten. Since these Elves were from the Unseleighe court of Elfhame Bete Noir, there were some diplomatic aspects to the affair. In this novel, Eric is called upon to inform Prince Gabrevys of the safety of his son and the desire of Rionne to remain in Elfhame Misthold for a while. Although Prince Gabrevys is not present in his court, Eric leaves his message with the Bard Jormin ap Galever. At Jormin's advice, Eric then leaves the Unseleighe court as rapidly as possible. Magnus is having some troubles of his own. While he has some minor problems adjusting to the Coenties & Arundel Private Academy, the major problem is the tenacious efforts of their mutual parents to take back Magnus. Although now aware that Eric is not dead, their parents are ignoring his presence per se and concentrating on the circumvention of efforts for Eric to adopt Magnus as his own son. Ace Fairchild is also having legal problems. She is now living with Ria Llewellyn, the head of a high priced law firm who has helped her file a Petition of Emancipated Minor Status. Unfortunately, her parents have been informed of her actions and have arranged a change of venue to Atlantic City where they are now living. Billy Fairchild is determined that Heavenly Grace will be returned, willingly or not, to continue to sing in his choir. Unknown to Eric and his friends, Gabriel Horn of Billy's Heavenly Grace Ministries is really Jachiel's father, Prince Gabrevys. Now the Unseleighe has several reasons to force Magnus and Eric into his evil reconditioning program at Christian Family Intervention. He even has parental permission for this treatment, which frees him from the constraints of Elven laws. After soul-eaters have fed on their minds, these victims will not be able to raise any objections. Ace would be the perfect instrument for implementing the prince's own plans against the humans. Feeding her to the soul-eaters would ruin her special talents, but binding her with ordinary Unseleighe magic would control her without destroying these talents. Of course, Billy Fairchild would have to die, but Gabrevys would not waste any tears over his death. Parker Wheatley finds the Heavenly Grace Ministries to be a new source of revenue for his Defense Initiative. Wheatley has never really been certain of the origins on his enemies, so calling them demons is not too much of a stretch of the truth. Besides, it allows him to use the equipment that he appropriated out of the hidden cache for its intended purpose. Once he has gotten a foot in the door, Wheatley will screen the staff of the Ministries for demonic infiltrato

Published by Thriftbooks.com User , 16 years ago
The Bedlam Bard books have it all---believable paranormal juxtaposed with "real" life; beloved characters who grow and change; characters to loathe; plot lines that you don't see coming...they are wonnnnnderful. If you're new to them, start from the beginning and work your way to this one. It's a bummer to read other reviewers and see that this may be the last in the series. That will suck. However, if this IS the last one, it did a great job of wrapping up long time characters' issues... These characters have stayed with me for years...love them! Even the "car elf" Tannim shows up in this one! And Ria Llwellyen is used perfectly...alot is revealed about her and yet she doesn't figure nearly as prominently in this book as others. Fantasy fiction just doesn't get any better. Mercedes Lackey rocks.

Published by Thriftbooks.com User , 16 years ago
This book is simply excellent. Eric's maturation process is fully complete in this book, Ria has gone from an unpredictable hybrid to a focused she wolf, and the world itself is so rich it just begs you to read the book again and again. The plotting is _taut_, the characters on both the good and bad side do make mistakes, and pay for them. One of the best books I've read in a long time. I simply can't say enough good things about this book.

Published by Thriftbooks.com User , 16 years ago
I was excited to get this as an early holiday prezzie. True to my expectations, I read it in less than 24 hours (mostly by staying up til 1:30). I now want to go back and read all the other books in the series. My only complaint is that the book really feels like the authors were trying to wrap up all story lines by the end of the book. The way they did it was good, but it felt like this is the last book of the series.

This may be the last one, but it is a real big smash of an ending

Published by Thriftbooks.com User , 16 years ago
Mercedes Lackey and Baen Books have had a much publicized breakup. This is really bad news for Eric Banyon fans...this book, Music to My Sorrow might be the last one in the series. If it is, the series will go out with a huge bang, not a whimper. This is, in many ways, the deepest and most complex of the Bedlam's Bard series. Banyon, in his forties, is now finally growing up. His "apprentice" and newly minted Guardian, Hosea, is operating on his own. Many of the threads of plot of the last three novels get tied up in Music to My Sorrow including the Heavenly Grace subplot, and Eric's parents. More and I'd be snerking...and urk, gurgle, gack, yeeeeeek! That collar gets tight, it does. It's been hell waiting for this book to come out, so I could review it...as one of Misty's first readers I read it quite some time ago, and loved it as much as you will, when you part with your hard earned cash. Buy this book, right now. Run out and do it. You won't regret it. Just think, you will be able to justify reading all the other Bedlam's Bard books in order again! Walt Boyes The Bananaslug. at Baen's Bar and member of the Editorial Committee at Baen's Universe magazine
Trustpilot
Copyright © 2022 Thriftbooks.com Terms of Use | Privacy Policy | Do Not Sell My Personal Information | Accessibility Statement
ThriftBooks® and the ThriftBooks® logo are registered trademarks of Thrift Books Global, LLC