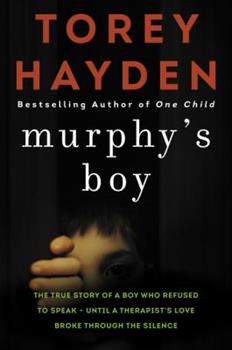 "A story rich in reasons for hope." -- Publishers Weekly From the bestselling author of One Child , the true story of a boy who refused to speak--until a therapist's love broke through the silence. When Torey Hayden first met fifteen-year-old Kevin, he was barricaded under a table. Desperately afraid of the world around him, he hadn't spoken a word in eight years. He was considered hopeless, incurable, but Hayden refused to believe it. With unwavering...

Published by Thriftbooks.com User , 21 years ago
Torey Hayden's books are always fascinating glimpses into the minds of disturbed children. "Murphy's Boy" is an especially gripping account of Hayden's actual work with a bizarre, mute, 15-year-old boy. In the beginning of the book, Kevin hardly seems human. He cowers under tables, sweating and shaking, never making a sound. Torey is unsure whether Kevin is capable of speech, but she begins working with him towards that end. A startling transformation occurs in Kevin after he finds his voice. Suddenly he is not only human, but intelligent, cunning and dangerous. Filled with hatred towards his abusive step-father, Kevin teters on the edge of insanity. The reader fears for the author as she delves deeper and deeper into the boy's horrifying past, uncovering a devastating history of abuse and torture.This book is fairly dark overall, although it does have its lighter moments, and it has an uplifting ending. For anyone interested in child psychology, I highly recommend this book.

Published by Thriftbooks.com User , 21 years ago
When readers are first introduced to Kevin, then 15, he is a ward of the state in a psychiatric facility. He has barricaded himself under a table and his voice had been unheard since his admission to the place when he was seven. In time, Kevin is drawn out from under the table and begins using materials provided during therapy sessions to free himself from his internal torment. Kevin, described as a skilled artist, used drawing to present events that took place early in his life. In time, Kevin begins to speak and he discloses an early life replete with brutality and horror; he and his sisters were sexually abused and beaten by their stepfather and one younger sister was beaten to death. Kevin and this sister were especially close and it is through dogged determination that the child's school, death and social services records are unearthed. The girl had been "buried" twice: the first time when she was killed and the second time when the social services bureaucratic agencies involved in Kevin's case felt that disclosure of the child's murder would preclude him from being viewed objectively. This reasoning seems bizarre and is never explained. Kevin's natural expression was often poignant; in one passage, he talks of "mirror-ghosts;" people who have, in his words died of "heart rot" because they have never been loved. The song "Where is Love" from "Oliver!" would be the song to underscore a good portion of this book. Kevin's progress accelerates; he learns to swim over the summer after some setbacks; he works with another child who is part of the Big Sister/Big Brother program and the pair appear to work well together; by fall of that year, Kevin was given a clean bill of health and promoted to a group home. Sadly, this is a short lived success after Kevin breaks a worker's arm after the latter tells him he can never be normal. The boy then serves the better part of 10 months in a hospital. Once released, he is assigned to a boys' ranch, which did not sound like the place to meet his needs. Over time, after contending with inappropriate placements and setbacks, Kevin is welcomed into a group home where he can serve as a mentor to his dorm mates. He insists on being enrolled in a public high school, which his new guardians endorse and from there, his progress is truly heartwarming. Like the mythical phoenix bird, Kevin literally arose from the ashes of his past and strove to create a better life for himself.

Published by Thriftbooks.com User , 21 years ago
I read this book in high school & recently re-read it. Torey is to be commended for her undying idealism & hope with severely disturbed kids. Also excellent was the vivid description of elective mutism...a little known psychological re-action to trauma & fear where a person, usually a child goes MUTE & doesn't speak at all. (If you read Ann Martin's Baby-Sitters' Club #131, Mary Anne Spier goes through something similar when her house burns to the ground-she goes nearly mute in fear). Torey gets Kevin to speak with patience & understanding. I love how she probes into the human mind & not only with Kevin, but with other people in her life, she has a fascination for why people behave the way they do. When Kevin finally gets the courage to speak, he reveals horrifying abuse in his background & one awful incident where he watched his sister get beaten to death! The way the sister's death was described was really shocking & chilling & even more scary was that Torey discovers that this abusive stepfather was allowed to return home after only four years in prison! Boy, Kevin's mother was APPALLING in that she chose to keep her awful husband at home & put Kevin in an institition! Poor Kevin! I could see why he had a lot of hate & anger toward both of them. It was good that Torey got angry at that piece of information. I'm a writer & some people consider me a bit peculiar myself & once someone asked me if I identified with the kids Torey worked with & I said no, I identify with Torey because Torey is idealistic, liberal & open-minded like me. I'm also interested in what makes people act they way they do. Even though parts of the book are haunting & sad, it also had its funny parts, especially with another kid, Charity that Torey works with as a Big Sister volunteer. Charity is funny, mischievous, frank, & says what's on her mind. I laughed out loud in the scene where Charity offers Torey a smashed piece of cake & Torey takes it & humoring her, eats it & pretends that it tastes great & thanks Charity & Charity then adds, "I tried to give it to our dog, but he spit it out." All in all, the book is inspiring & it's great that Torey never gives up on Kevin, even when he goes through difficult periods. I like how the descriptions of the atmosphere & people & their feelings are vivid & real.

The most moving book I have ever read in my life.

Published by Thriftbooks.com User , 22 years ago
Murphy's Boy is the most moving book I have ever read in my life. I could not put this book down. It was extremely well-written and very easy to read. As this is a true story it made me think that we have not truly suffered like this child. The world needs more Torey Haydens.

A tremendously touching story of a teacher's love.

Published by Thriftbooks.com User , 23 years ago
This is the fourth book I have purchased and read by Torey Hayden and each has been a touching, poignant account of Torey's experiences with abused, neglected and handicapped children who, because of Torey's love and perserverance, broke free. Murphy's Boy was my favorite. You will laugh, cry and get angry at the injustices this child has suffered but manages to overcome because of Torey's committment to him. I can't read more than two of her stories at a time because they are so emotionally draining. Yet, I have enjoyed each and I highly recommend them to everyone.
Copyright © 2020 Thriftbooks.com Terms of Use | Privacy Policy | Do Not Sell My Personal Information | Accessibility Statement
ThriftBooks® and the ThriftBooks® logo are registered trademarks of Thrift Books Global, LLC