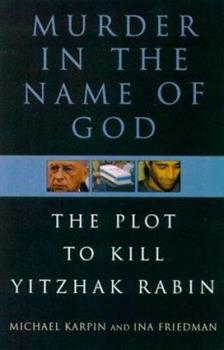 Murder in the Name of God: The Plot to Kill Yitzhak Rabin

by Ina Friedman and Michael Karpin

Examines the events leading up to the 1995 assassination of Israeli Prime Minister Yitzhak Rabin and exposes how the movement that produced his killer was allowed to grow.

A frightening tale of mystagogical fanaticism

Published by Thriftbooks.com User , 20 years ago
This is a gereat book. As a lvoer of Israel I was always appalled by the Yigal Amir's of this world. This book gives great context to the more fanatical nationalist elements in both Israel and regrettable here in the United States. I never thought I owuld ever see the day when bogus Rabbis would issue a "fatwa" on a Prime Mnister's life. yet Jacob Hecht essentially did that. Unfortuantely the debate in Israel (has anyone seen the Knesset in action?) is loud, vituperative, vulgar and shrill. I am also aware of conspiracy theorists ont he web, people who are trying to exonerate the mystagogical settlers from teh murder. This is baloney and worthy of an Oliver Stone. Unfortunately politcal/physical violence against fellow Jews is not unheard of: the Arlosoroff Affair, the Altalena affair; the murder of Emil Grunzweig in an anti-Lebanon war demonstration in 1982 and of course the Rabin murder. The fact that some insane people here and in Israel are calling for a pardon for Amir is very disturbing. If you hate fanaticism as I do, this book becomes despite its superb writing and research - a painful read.

Published by Thriftbooks.com User , 21 years ago
I became interested in the subject of the Rabin assassination after reading a few conspiracy theories on the web. This book, however, provides ample evidence that Yitzhak Rabin's murder wasn't the act of shadowy secret services, but, rather, a lone fanatic acting on what he believed to be the implicit commands of self-righteous religious authorities who should have known better. In a way I was disappointed by the lack of JFK-style mystery in the book, but in the end I found it a truly enlightening work which brings to light the inevitable consequence of mixing politics with religion: violence.

puts the events in context

Published by Thriftbooks.com User , 22 years ago
I was fascinated by this book. Although I had known the events, I hadn't appreciated how they had emerged from the political discourse of the ultra-orthodox. The book provides plenty of compelling detail. It is well written and it frighteningly suggests that Israel is now threatened by civil strife.

The most recent chapter of Israel's recent history

Published by Thriftbooks.com User , 22 years ago
This is an important book which is essential reading for anyone who wants to understand the background to the current situation in the Middle East. Ostensibly an account of the events leading up to the assassination of Prime Minister Rabin, the book is much more than this. It contains a wealth of background information and scrupulously marshalled detail which shows how the assassination wasnot an act of inhuman recklessness on the partof an isolated fanatic, but part of of a deliberate movement orchestrated by the leaders of the ultra-orthodox right to carryout a death threat 'sanctioned by Jewish law' against someone who was giving away the land of the Jews, in going along with the Oslo accord. It is a devastating account of mistaken bigotry and evil employing non-democratic ends to bring about its aims. the book paints a pictrure of a country on the verge of civil war and, although at times it reas likea thriller, this excellent book is an impartial and well-documented account of the most recent chapter in Israel's history.

Ties together circumstances which led to Rabin's murder.

Published by Thriftbooks.com User , 23 years ago
This terrific book was an easy read, and managed to weave together many seemingly apparent notions in a manner no one has yet done about the relationship between the assasination of Rabin and the political right in Israel. Yet it also tells the greater story of how the small religious right minority in Israel has slowly begun to leave its mark on Israeli society at large, while using the very government and democratic tools they reject. While this book is a must read for anyone living in Israel or interested in the political situation there, it has great value for Americans (a chapter is devoted to right wing supporters of Israel in the United States) and freedom loving people everywhere. Serious dangers exist when people attempt to gain power democratically while preaching that their ways are the ways of God (with the implication that all others are the ways of non-believers). The chaos that can take place as these groups gain power is apparent from such disparate places such as the United States, Israel, Algeria and Iran, to name a few. This book seriously details the steady erosion to Israel's once vibrant, but now teetering, democracy that has resulted from the rise to power of these would be despots. The terrible situation that exists in Algeria and Iran, partly due to the rise of such groups, is clear. One can also see the clear link between these groups in Israel and those who would bomb abortion clinics, burn black churches, deface synagoges, bomb federal buildings, and commit other similar acts of domestic terrorism and intimidation in the United States.
Copyright © 2022 Thriftbooks.com Terms of Use | Privacy Policy | Do Not Sell My Personal Information | Accessibility Statement
ThriftBooks® and the ThriftBooks® logo are registered trademarks of Thrift Books Global, LLC