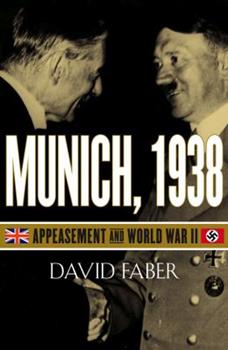 The dramatic narrative account of the 1938 Munich appeasement conference, in which Britain agreed to Adolf Hitler's annexation of the Sudetenland in return for his promise never to go to war again--before tumbling inexorably into World War II. - A pivotal chapter in history: When British Prime minister Neville Chamberlain and Adolf Hitler signed an appeasement treaty in 1938, Chamberlain promised that the result would be "peace in our time." David...

Published by Thriftbooks.com User , 12 years ago
A deep and scholarly analysis of Hitler and Chamberlain's meetings and negotiations in 1938 surrounding the Anschluss and the invasion of Czechoslovakia. Notable for the remarkable level of detail, in which each conversation and movement of the principal players is carefully tracked. This detail is still clearly subordinated to the overall narrative plan. Chamberlain here comes across as a somewhat befuddled elderly man, way out of his depth. Hitler seems to be a shrewd and effective negotiator, winning games of brinksmanship with the other European powers. At times reading the book one doesn't know whether to laugh or cry, the stories are so odd. The most peculiar surrounds Hitler's sacking of Blomberg and Fritsch, senior military officers who were perhaps a bit too independent for Hitler's taste. The way in which Fritsch in particular was let go is amazingly bizarre - involving the blackmail of an unrelated officer named Frisch, the name similarity, like in the movie Brazil, leading to his sacking. It is interesting to contrast the German officer's notion of honor with modern perspectives on their actions, which, of course, are very different. The pace of the book overall is entertaining, although in the later chapters I sometimes found myself skimming as the mass of detail became a bit much. But overall it was interesting. The main weaknesses of Faber's treatment, which focuses on personalities and actions, is that there is a bit less of a philosophical analysis or broad perspective. In particular, the book lacks a detailed legal analysis of the treaty obligations that were incurred and broken, and there is also little in the way of detailed military analysis (i.e., what would the military result have been had Britain gone to war?). Some maps would have been helpful as well. Most references are in English and not German. The level of scholarship in the book is excellent, the narrative persuasive and interesting throughout. I had a couple of reservations about isolated points here and there. For example, on page 24, Faber characterizes what might have been a veiled attempt by Neurath to obtain a concession from Britain in exchange for permitting Halifax to meet Hitler as an "attempt at blackmail." But there is no indication in the text that Neurath's suggestion was anything more than standard diplomatic attempt to gain a concession. I fail to perceive why it should be characterized as blackmail (particularly in light of the more specific meaning of the term in the Frisch affair later in the book). On page 25, Faber states that "Göring enthusiastically had assured [Henderson] that `he had seldom heard Herr Hitler speak more in favour of an understanding with Great Britain' - a shamelessly brazen remark for Göring to have made, given that just a few hours earlier he had been listening to Hitler's diatribe at the Reich Chancellery." Here, the author suggests both that Göring's statement is false and that it contradicted Hitler's commen

Driving off the cliff

Published by Thriftbooks.com User , 12 years ago
Knowing the end of this historical event, you get to watch good men's ideals get in the way of fighting evil. David Faber recounts the events on both sides leading up to the Munich Pact of 1938 that sacrificed Czechoslovakia in the name of peace. Faber's recounting of this historical account of can best be summed up by the quote in the book, "The choice is not between war and peace but between war now or war later." Faber brings the reader inside these fateful events to watch people's actions and reactions. I found this book somewhat disconcerting knowing what is to follow. All through the book, you keep asking how the participants did not realize the danger. Faber chronicling of the events answers this question. Although I found it difficult to determine the relative importance of various positions in the English Parliamentary system, I found it a cautionary tale of giving evil a pass. This is a fascinating read that has historical implications to this day. If you want to see how idealism and hubris can blind common sense, read this book.

Published by Thriftbooks.com User , 12 years ago
Few authors are able to write narratives that keep a reader's interest from beginning to end, especially when the subject is diplomatic history. As a product of the '50's I was inculcated with the saga of Munich, Chamberlain and Hitler from grade school through high school and mostly in brief episodic and anecdotal fashion. Faber has serious talent (understatement). For me this was re-learning history in spades and especially on a subject of deep interest. Parts of the book read like a thriller from Hitler's browbeating of Schuschnigg, his constant mad tirades over Eduard Benes to anyone within earshot, the Wermacht constantly alerted then told to stand down and finally the diplomats and secretaries running and scurrying back and forth to deliver eleventh hour messages. On who's neck would Hitler bring down the Sword of Sigfreid next? I misunderstood Chamberlain for years but the book left me convinced that he was the wrong man in the wrong place at the wrong time, or in today's parlance, old school. I think Faber used diary excerpts well and was able to put the reader in the room. I was astounded by Chamberlain's obsequiousness and bootlicking of Hitler. In spite of this I continued to remind myself that Chamberlain and most of the British did not want another Somme. I'm also left with a better impression of how manifestly insane Hitler was. Faber rightly places the betrayal of the Czechs in the lap of Chamberlain but I'd also like to give the French their due for backing away from their part of the TOV. I don't think much about historical "what if's" but will always wonder what the outcome would have been if Churchill had been the PM. The Munich agreement was indeed a diplomatic blunder and the ripple effect continues today in the form of historical analogy. This was not another dry, laborious exercise of a subject that's been revisited ad infinitum but an academic work with a feeling of urgency and drama.

A fascinating account of the people and events that will embolden Hitler to wage war.

Published by Thriftbooks.com User , 12 years ago
David Faber has written a most thoughtful and well-researched study of the time leading up to the Munich Conference, the conference itself and the immediate repercussions that evolved from that conference. All the key players are covered: Hitler, Chamberlain, Eden, Halifax, Mussolini, Blomberg, Keitel, Fritisch and many others. The author also covers some of the actions Hitler undertook to make Germany compliant to his wishes as well as ready for war. I was completely surprised, expecting a dry, political reconstruction of the facts but instead received a poignant and intriguing look at the behind the scene story of the people involved in this drama that will lead to war for most of Europe. The author clearly shows the personal aspirations, fears and hopes of the people of the British and French governments in trying to curtail Hitler's thirst to recapture the lands lost to Germany after the defeat of WWI while avoiding another war. Even after 20 years since WWI, the Allied countries had still not recovered and Chamberlain had no appetite to throw his country into another devastating war. The reasoning is understandable but naiveté when you consider who his antagonist was; a man who feeds on and was energized on weakness. That's why Chamberlain continued to appeased Hitler until the invasion of Poland in Sept 1939. The account also clearly shows Hitler's devious ways as he plays with these people as he strives to obtain his goals. Some of those goals will be the annexing of the Sudetenland, Austria, Czechoslovakia, the city of Danzig. Taking over Czechoslovakia will be the keystone coverage in this book. During the Munich Conference, Hitler using the threat of war and with the help of Mussolini intimidate Chamberlain and Daladier to sacrifice Czechoslovakia for the sake of a tenuous peace. A short time later, defying the Munich agreement, Hitler carves up Czechoslovakia. The author and former politician has certainly done his homework and provides a wealth of information on the personal and public lives of key people. These are the people who through their actions or non-actions will cause WWII. The author has done a magnificent job of setting the stage for the lead up to WWII. If you have an interest in WWII and how and why it started then this book would be the ideal place to start.

Published by Thriftbooks.com User , 13 years ago
When Mr. Neville Chamberlaine returned to London from his meeting with Hitler at the end of September,1938,he waved a piece of paper which had his and the Fuhrer's signature."Peace for our time"- he exclaimed.Reality showed how naive he had been then. Mr Faber has written one of the best books on this topic.It is a narrative history which starts on November,5, 1937.Hitler delivered a famous speech in which he made it very clear that it was his intention to wipe out Czechoslovakia with lightning speed.All its other neighbours would follow and submit to the Nazi beast like a pack of cards. The next chapter describes the Blomberg- Fritsch scandal.In its aftermath, Hitler cemented his power and his dominance over the army.Adhering to his belief expressed in his "Mein Kampf",Hitler made sure that Austria had to be made part of the German Motherland.In a fascinating chapter which reads like a thriller, the author writes about the tactics of terror which the Fuhrer employed to coerce the Austrian Chancellor Kurt von Schuschnigg to hand over Austria to the Nazis.Austria was meant to serve as the general rehearsal for what was to follow,namely:the rape of the Czechs. The rest of this fascinating book shows to what extent British personalities at that time were swayed and duped by Hitler into believing that what he really wanted was peace.Among them were Lord Halifax and Lord Runciman.Fortunately, there were other voices which branded Hitler a blatant liar. This book contains new original archival material and we see to what extent Chamberlain had made every possible effort to appease Hitler.The final result is known to everyone.
Trustpilot
Copyright © 2022 Thriftbooks.com Terms of Use | Privacy Policy | Do Not Sell or Share My Personal Information | Accessibility Statement
ThriftBooks® and the ThriftBooks® logo are registered trademarks of Thrift Books Global, LLC