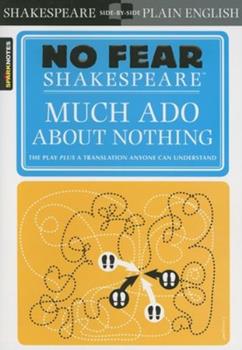 Much ADO about Nothing (No Fear Shakespeare): Volume 11

Read Shakespeare's plays in all their brilliance--and understand what every word means Don't be intimidated by Shakespeare These popular guides make the Bard's plays accessible and enjoyable. Each No Fear guide contains: The complete text of the original playA line-by-line translation that puts the words into everyday languageA complete list of characters, with descriptionsPlenty of helpful commentary

Published by Angela , 1 month ago
I’m a bit biased due to not really liking Shakespeare (call me what you want), it’s a good read but I wouldn’t say I enjoyed it.

Fantastic read for everyone

Published by Thriftbooks.com User , 6 years ago
I loved reading this story so much I couldn't put it down - much to the disgruntlement of my homework. As someone who was never a shakespear fan, I was rather surprised I took the chance to read this, and I'm so overjoyed that I did. The characters are hilarious and everything weaves together so well! Truly beautiful art from shakespear. I was forced to read his works in school and I found myself lost and sleepy, but when I read Hamlet my interest started to peak. It was tough to read but enjoyable. Thanks to hamlet I gave Much Ado a shot, and it was a LOT easier for me to read and I found myself laughing many a times! (As well as speaking a few sentences to friends and family in "Shakespearean" by accident...whoops). I recommend this book HIGHLY and if you like it you should definitely read Hamlet or even the Canterbury Tales :) enjoy!

Published by Thriftbooks.com User , 14 years ago
I bought this as a gift. He enjoyed the book. It arrived rather quickly (quicker than they said).

A great way to get the most out of your Shakespeare

Published by Thriftbooks.com User , 15 years ago
As someone who reads Shakespeare only with a lot of prodding, I was pleasantly surprised by how much I enjoyed reading this version. A vast improvement on the books used when I was in high school, with the text on the right and the "translation" on the left, Sourcebooks expands on the information in a very readable form, chock full of pictures to add to the enjoyment. And a CD bonus! I'm looking forward to reading more!

We shall not cease from exploring

Published by Thriftbooks.com User , 16 years ago
We shall not cease from exploring, and the end of all our exploring will be to arrive where we started and know the place for the first time. -T.S. Eliot- We can now have voice over narration with movies that make DVD's well worth buying and we can enjoy the mover more after seeing what the artist or writer or director was trying to accomplish. I my self need someone to tell me when my show is untied. You may notice a few drawbacks to the DVD extra rout that this book addresses. First even if the media lasted for ever the DVD will become unreadable with newer technology. Unless you have a portable device about the size of a book a DVD can be clumsy to carry around. People that are book oriented can get more pleasure from this medium. The book its self is conveniently divided into logical sections as: Introduction Synopsis The screenplay The cast The film The shoot All the movements and dialog are clearly written. There are plenty of color pictures as visual aids. After enjoying the different view both Shakespeare and the movie, this book makes a great conversation item. Much Ado About Nothing

Since summer first was leafy...

Published by Thriftbooks.com User , 19 years ago
"Much Ado About Nothing" is one of those sparkling adaptations that supposedly couldn't have been done. But Kennneth Branagh (director and star of "Hamlet," and creator of the supremely underrated "Midwinter's Tale") brought an all-star cast in a sparkling Tuscan setting, to bring this tale of bickering loves and sordid betrayals to life as never before.The sullen Don John has just been stopped in a rebellion against his brother Don Pedro, by young hero Claudio. Now all of them (including Don John, whom his brother has forgiven) are arriving in Messina, the home of kindly Leonato. But when they get there, Claudio immediately falls in love with Leonato's beautiful daughter Hero. And despite the efforts of Don John, Don Pedro manages to get the two young lovers together and altar-bound.But Don Pedro isn't willing to stop there. Hero's cousin Beatrice has a long-running feud with Claudio's pal Benedick -- they insult each other, they bicker, they argue about everything ("It is so indeed -- he is no less than a stuffed man!"). What's more, both of them swear to stay single forever. ("All women shall pardon me -- I shall live a bachelor!") Pedro and the others conspire to get Benedick and Beatrice to somehow fall in love with each other. And at first it seems that everything is going well -- until Don John manages to cast doubt on Hero's honorThere's a certain timeless quality to "Much Ado" -- not just the dialogue, but the simple costumes and the buildings in it. That leaves the audience free to pay more attention to the dialogue and its plot. And what a plot it is! "Much Ado" is brimming over with funny dialogue, dastardly plots, comedic supporting characters and weird pairings. (Beatrice and Benedick are the sort of love-hate couple that a lot of movies try to have, but don't succeed with)The dialogue is mostly (if not all) Shakespeare's own, but it's not necessary to be a Shakespeare buff to understand what they're saying. It's not dumbed down, either -- it's just spoken as normally as ordinary English. And the Tuscan landscape sparkles with life, passion, and lots of fruit and wine. You don't need to be a fan already to understand and appreciate this movie.Kenneth Branagh (who also directed and adapted the play) is amazing as Benedick, lovably witty and egotistical; he gets a little silly at times (such as his bird calls or joyous romp in the fountain), but demonstrates his serious ability after Hero is disgraced. the outstanding Emma Thompson is even better as the sharp-tongued Beatrice, a fiery young woman with her own mind and definitely her own mouth. Thompson lashes out Shakespeare's witty lines as easily as if she just thought them up herself; one of her most powerful scenes is here. Denzel Washington (Don Pedro) looks like he's having a great time; Keanu Reeves (Don John) is a bit flat in places, but glowers well enough. Kate Beckinsale's first movie role (Hero) is suitably sweet and adorable. Robert Sean Leonard (Claudio) is the one weak

Shakespeare at his comedic best...

Published by Thriftbooks.com User , 23 years ago
Debatably, this is perhaps Shakespeare's greatest comedy. The combination of the hilarious scathing witticisms exchanged between Beatrice and Benedick, the "malapropatic" words of Dogberry, and the underlying beautiful theme of love make this an illustrious masterpiece. It is must-read for anyone interested in studying the Shakespearean canon for all it is worth. It is also a very understandable play; even to someone who is not experienced in deciphering the very awkward style of Elizabethan English.

Much Ado About Nothing Mentions in Our Blog

Drink Your Books in These 9 Literary-Themed Bars
Published by Beth Clark • February 08, 2019
Literary-themed bars across the US beg the question: Are you really alone if you're with the spirit(s) of your favorite authors or books? We don't think so. (And we're betting you've taken a book into a bar before.) Below are 9 establishments bookworms can drink their books in or even borrow one from the bar's library to read while sipping a cocktail.
Read Article
Trustpilot
Copyright © 2022 Thriftbooks.com Terms of Use | Privacy Policy | Do Not Sell My Personal Information | Cookie Preferences | Accessibility Statement
ThriftBooks® and the ThriftBooks® logo are registered trademarks of Thrift Books Global, LLC