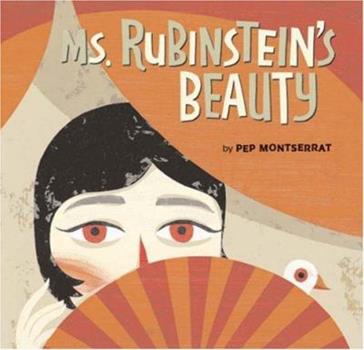 It's a message we learn in childhood, but all too quickly forget: "Beauty is in the eye of the beholder." "Beauty is only skin deep." With its incandescent paintings and imaginative text, Ms. Rubinstein's Beauty shows us just how true these timeless sayings can be. Children will be enchanted...and surprised at every turn. "Ms. Rubenstein is a beautiful woman. But nobody knows it." No--they don't notice her wonderful eyes, delicate hands, graceful...

Published by Thriftbooks.com User , 15 years ago
The beautiful children's book is usually an ugly beast. Formats that adults find appealing tend to bore young tots to a stupor. If a picture book looks good, nine times out of ten you can count on its writing being sub par or (far worse) "tasteful". Ugh. Still, I won't deny that I'm a sucker for a beauty. Toss me a pretty book and observe as my resolve turns to a kind of viscous goo. On a first glance, I found "Ms. Rubinstein's Beauty" a visual joy. The kind of thing you could page through time after time again and never grow tired of. Still, it wasn't until I discovered that the text accompanying the book was not only good but downright poetic that my respect for one Mr. Pep Montserrat took a definite climb upwards in estimation. This kind of rarity makes it all the sweeter. Montserrat is a first time author/illustrator and let it not be on my head that he is not appreciated as fully as he deserves. So I'm singing to the hilltops that "Ms. Rubinstein's Beauty" is a remarkable, touching, deeply attractive tale for young `uns. It is that rare meeting of what kids like with what adults like, together at long last. Ms. Rubinstein has a bit of a problem getting people to notice her finer aspects. You won't find anyone with prettier eyes or a sweeter nose. No one even comes close when making comparisons to her pretty hands that "move harmoniously and delicately" with her tiny little feet. For you see, Ms. Rubinstein is the bearded lady of the Balius Circus and it's a lonely life indeed. One day, she takes herself to the park where she feeds the pigeons, gathering many a stare from the passerby in the process. No one notices anything besides her beard, except for one Mr. Pavlov who sits down next to her. He admires her hands and feet and she, in turn, likes the way he holds his walking stick and crosses his legs. It is love at first sight. And though "nobody sees the love growing between them," the bearded lady and Mr. Pavlov, who as we are soon to learn is the trunk-nosed Elephant Man of the rival Guston Circus, have finally found one another at last. The book is dedicated, "To all the bearded ladies, including those who are neither ladies nor bearded." Insofar as I could tell, clever wordplay such as this is not the work of a translator. Mr. Montserrat was born in Spain, but his ear for an English turn of phrase rivals that of most native English speakers. Here you'll find phrases like, "But their eyes don't see their eyes anymore, just their hearts. And their hearts say that they had been waiting for each other." Right from the start it is clear that every little sentence in this book has been carefully crafted and weighed against its alternatives. Language should never be ignored in favor of pretty pictures. The best a person can hope for is a seamless convergence of the two, and "Ms. Rubinstein's Beauty", has that in spades. I was also particularly keen on the gentle morality of the tale. We've all the heard the st
Trustpilot
Copyright © 2022 Thriftbooks.com Terms of Use | Privacy Policy | Do Not Sell or Share My Personal Information | Accessibility Statement
ThriftBooks® and the ThriftBooks® logo are registered trademarks of Thrift Books Global, LLC