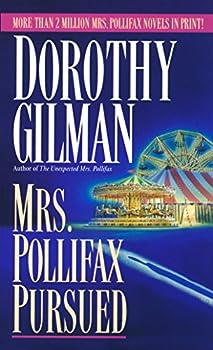 "Mrs. Gilman has a nice, relaxed style and an easygoing way of telling a story....Should delight you whether you're looking for smiles or thrills." --The New York Times Book Review The last thing Mrs.... This description may be from another edition of this product.

Mrs. Pollifax Does It Again

Published by GranSarh , 3 years ago
Mrs. Pollifax now married, finds herself alone with hubby out of town. She's interrupted by a young lady hiding in her house. Of course the lady needs Mrs. Pollifax's help and the adventure begins. This book was not as action packed as some, but I still love Dorothy Gilman's writing. I recommend reading the Mrs. Pollifax books in order to keep up with sequence of action and addition of characters.

Published by Thriftbooks.com User , 15 years ago
There is a great difficulty in finding all the works of this author and that is a shame. They would be a great series especially for those of us entering retirement and preferring to listen to books rather then reading them. They are well written and fun and thoroughly enjoyable.The author needs to have all of the series put on tape or cd!!

Published by Thriftbooks.com User , 19 years ago
This time Mrs. Pollifax begins her adventure right in her own back yard when she discovers Kadi, a young woman who is fleeing her pursuers and is hiding in Mrs. P's house. She tries to help the girl get away, but the pursuers are right on her tail, so she appeals to Carstairs, her CIA contact, who sends her to a "safe house". Much to her surprise the safe house turns out to be a carnival and Mrs. Pollifax and Kadi learn some new skills to become part of their new environment. Someone who is also on the run and is hiding in the carnival is badly beaten and Mrs. Pollifax has a new angle to explore. This is all tied in with Kadi's friendship with a young man from a small African country and the disappearance of a wealthy American businessman. Before it's over, Mrs. P. and Kadi are whisked to Africa and new problems surface before a satisfactory ending is achieved. This is a delightful romp with the intrepid 60-something heroine and most of it is set in the United States, a nice change of pace from her other adventures.

Published by Thriftbooks.com User , 21 years ago
The story starts in medias res and the action never lets up! Gilman tries a little too hard to inject youth through her new character of Kadi Hopkirk, but the arc of the story still works. "Pursued" is very, VERY exciting!

Published by Thriftbooks.com User , 23 years ago
I think this is one of the best books yet. It was exciting, funny and a great summertime novel.

Published by Thriftbooks.com User , 24 years ago
Emily Pollifax is the elderly heroine of many of Dorothy Gilman's adult novels. Mrs. Pollifax is average height with a tight bun of gray hair at the back of her head. She wears thin-framed glasses, and dresses according to fashion. She is in her mid-seventies right now, according to author Dorothy Gilman. Despite her age, however, she is a part-time CIA agent. The novels about Mrs. Pollifax describe her exciting adventures in far-off lands. Despite her enormous traveling experience, she is a member of the local Garden Club, and has a beautiful garden in her backyard in New Jersey. She was a widow, but is now married to Cyrus Reed, who is often away on business trips. She is very lonely and bored with her life, probably due to the fact that she is often alone in her home without her husband. This is why she became a CIA agent. In one of her books, Mrs. Pollifax Pursued, the story starts in her garden in New Jersey. She was planting basil while getting ready for her Garden Club meeting the next day. Her time is spent working in her garden and doing other various things, all without much excitement. Of course, when she is working as a CIA agent, she gets many more thrilling predicaments! Emily Pollifax is always sympathetic to those in need. In her book Mrs. Pollifax Pursued, she meets a young woman named Kadi Hopkirk. Kadi had been hiding in her closet for the past three days, so you can imagine Mrs. Pollifax's surprise when she found her! However, when she realized that Kadi was in immediate danger, Mrs. Pollifax helped her out in every way possible. Unfortunately, that made her take part in a highway chase from New Jersey to Connecticut! Mrs. Pollifax is a thoroughly thrilling person! Her experiences in the various corners of the earth are extremely exciting. She is unpredictable (as many bandits find out sooner or later), and clever in puzzling situations. For instance, also in Mrs. Pollifax Pursued, she finds out that thieves are sneaking into her house to search for Kadi Hopkirk. She and Kadi leave the house for a while to go shopping, but beforehand, she does several things that would prove to her that the thieves had indeed been inside the house. For instance, she puts tiny slips of sticky tape in between the doors that lead to the outside and the door frames. When she comes back to her home, she finds that the tape had been torn from the door frame by a person other than herself. Plus, Emily is a genius. Her styles of observing little clues help her to solve the big picture. For instance, in Mrs. Pollifax Pursued, she puts together the clues of a beard made white with talcum powder, a splotch of blood, and the fact that only one person working at a carnival had a whole beard, to save the life of one of her friends. She observes the smallest details to lead her to the most important conclusions! Now that I have introduced you to Emily Pollifax, I must also acquaint you with
Trustpilot
Copyright © 2022 Thriftbooks.com Terms of Use | Privacy Policy | Do Not Sell My Personal Information | Cookie Preferences | Accessibility Statement
ThriftBooks® and the ThriftBooks® logo are registered trademarks of Thrift Books Global, LLC