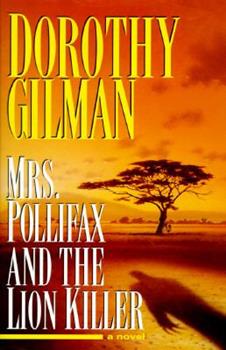 Mrs. Pollifax and the Lion Killer

In her new adventure, Mrs Pollifax accompanies her young friend Kadi Hopkirk to the African country of Ubangiba, where Kadi's childhood friend, Sammat, is soon to be crowned king.

Published by Thriftbooks.com User , 13 years ago
[[ASIN:0449150046 Mrs. Pollifax and the Lion Killer (Mrs. Pollifax Mysteries) This book is one of a series of books that reminds me of the Miss Marple mysteries of Agatha Christie with the added bonus of action and intrigue in exotic places. It is very well written, the characters are very unique and believable. If you like mysteries,and action/adventure novels, you will like this series. All of the books that I have read have been well worth reading.

a way to pass the time

Published by Thriftbooks.com User , 16 years ago
I hadn't read the previous book, Mrs. Pollifax Pursued, where she apparently meets Kadi and Sammy, her main cohorts in this story. Kadi finds out that Sammy is having difficulties and so she and Mrs. Pollifax hop on the first available flight to Ubandiba, where Sammy is the current ruler. The people are terrified by the rumors and murders of the Lion Killer, all of which point to Sammy. Kadi, daughter of murdered Ubandiba missionaries, becomes a target of the Lion Killer and Mrs. Pollifax must use her resources and ingenuity to save them all. I listened to this book, and it was a pleasant diversion on a long drive.

Published by Thriftbooks.com User , 18 years ago
In Dorothy Gilman's previous book, "Mrs. Pollifax Pursued", she introduces us to Kadi, the daughter of Ubandiba missionaries, and her college friend Sammy, who is now trying to rule the country after many years of dictatorship. Sammy calls upon Kadi for help and Mrs. Pollifax decides to accompany her. There have been a series of violent deaths at the hands of a "lion killer", one who dons a lion costume, and Sammy's enemies have accused him of being behind the murders. When Kadi arrives in Ubandiba, she becomes the target of an old enemy, and Mrs. Pollifax does her best to protect the young girl. A potential archaeological dig and the hint of romance for Kadi combine with political intrigue and murder to create another satisfying story of Mrs. Pollifax.

Published by Thriftbooks.com User , 21 years ago
Gilman's charming spy is back, this time in a book that is more of a sequel than another series entry. Even if you don't normally read series books in order like I do, I strongly suggest you meet Kadi and friends in MRS POLLIFAX PURSUED before reading this one. Now our beloved Emily Pollifax is traveling to Kadi's home turf, Ubangiba, to untangle a web of political intrigue with her usual clever style.There was a noticeable lack of CIA presence in this book that made me wonder if Emily had made a copmlete break from the agency, but then I noticed INNOCENT TOURIST and UNVEILED both come after this one and seem to involve the CIA again. I found the clues a little easier to spot in this book than in earlier stories, but it was great fun putting them together for a satisfying conclusion. All in all, another great Mrs. Pollifax adventure.

A thrilling mystery worth reading

Published by Thriftbooks.com User , 23 years ago
I have read this story and many other Mrs. Pollifax books by Dorothy Gilman. This story is full of mystery and action while taking you to a foreign land. It will keep your attention through the entire book. It is full of suspense. When I was reading this book I didn't want to put it down. I highly recommend this book for those that like mystery books.
Copyright © 2020 Thriftbooks.com Terms of Use | Privacy Policy | Do Not Sell My Personal Information | Accessibility Statement
ThriftBooks® and the ThriftBooks® logo are registered trademarks of Thrift Books Global, LLC