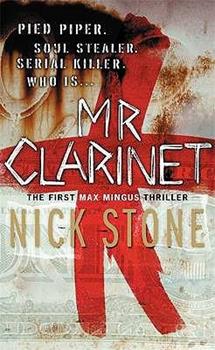 (Book #1 in the Max Mingus Series)

"A first-class thriller that is equal parts hard-boiled Raymond Chandler mystery and voodoo-powered crime-fiction masterwork. . . . A spellbinding thriller of the highest order." --Chicago Tribune Max... This description may be from another edition of this product.

Published by Thriftbooks.com User , 13 years ago
I actually read Nick Stone's second novel "The King of Swords" first. I was barely 100 pages into it, when I jumped online and ordered Mr. Clarinet. His books are so suspensful, the characters are interesting that it is hard to put them down once you begin reading. In Mr. Clarinet, Max Mingus goes to Haiti to help a very wealthy man find his kidnapped son. The plot line and ending are unlike any I've ever read, and I read a LOT!! If you are a suspense, mystery, fan, Nick Stone's books are not to be missed.

This is a Very Impressive Debut

Published by Thriftbooks.com User , 14 years ago
MR CLARINET is a highly acclaimed thriller, that won both the CWA Ian Fleming Steel Dagger Award (for best adventure/thriller novel) and an International Thriller Award (for best debut novel of 2007). I think it's largely deserving of those awards. The plot of MR CLARINET is straightforward. Max Mingus is a police detective who served seven years in prison for a vigilante killing. After being released, Mingus is offered a job by a rich man named Allain Carver. He is asked to find Carver's son Charlie, who disappeared three years ago on the island of Haiti. If he succeeds, he will get paid $10 million. Mingus then travels to Haiti, and learns the case is much more complicated than it seems. Overall I thought MR CLARINET was well written. Nick Stone's writing style reminds me a lot of another UK author, John Connolly. Stone's the type of writer who takes a lot of time to set up the story, the main character's background, and the surrounding atmosphere. This is not what I would describe as a leanly written, fast-paced novel. In MR CLARINET, Stone does a great job detailing the realities of Haitian society in the mid-1990s. Needless to say, it's not a great place to live. If you have a pre-existing interest in this region, this novel provides some fascinating insights into what daily life is like in the poorest country in the Western hemisphere. If you couldn't care less about Haiti, you might find all the detail to be tedious. Personally, I though Stone paid a bit too much attention to the setting, and not enough time on developing the characters. Other than the anti-hero Max Mingus, I didn't feel most of the characters in this book had much depth. I also felt that the plotline was a bit too convoluted for my tastes, with one clever twist too many. MR CLARINET is gritty to the extreme. This book has a ton of graphic violence and sexual content (of the non-erotic variety), and readers sensitive to such material should definitely stay away. But in the end, I very much enjoyed MR CLARINET. The story was well told, and the writing of very impressive quality. This is the first book in a series, and I look forward to future installments.

Oh that Vodou that you do

Published by Thriftbooks.com User , 14 years ago
How to see the world that is hidden.In this masterful terror thriller we step into the dark world that is Haiti.After the chaos of Baby Doc and the puppets that are hand picked by the US a frightening world emerges where the power of the Loas and the Bokar turn life into a zombie style existence in order that the people may "live".Mingus finds himself searching for the son of a privelged white family ,but what he finds is the nightmare world of child traders that exist to feed the sexual fantasies of the super rich.Brilliant terrifying and very thought provoking.I look forward to his next book with anticipation.

Published by Thriftbooks.com User , 14 years ago
What John Sandford does with Lucas Davenport in Minneapolis, Nick Stone does with his anti-hero in Haiti. I kept comparing the two, Max and Lucas. Max has more baggage than Lucas, but they share the same world-view. If a good book has an impact on its readers, then, this is a brilliant book. I immediately wanted to look up Haitian past and current history. Storytelling at its best...but not for the easily offended!

Published by Thriftbooks.com User , 15 years ago
It is 1996. Max Mingus, ex-cop and PI, has just been released from prison for killing a pair of junkie child murderers. In an emotional vacuum since his wife's death in a freak accident, Max has no desire to follow through with their plans for world travel, returning home to Miami. Unable after all to endure the home he shared with his wife, a woman who wrought profound changes in a downward-spiraling life, Max checks into a hotel. There he is contacted by Allain Carver, a rich white Haitian, who has been actively pursuing Max to search for his kidnapped son, Charlie, now five-years-old. Inclined toward a change of scene, Mingus accepts the assignment with much trepidation, the three former PIs on the case either dead, physically mutilated or missing. Maintaining his jailhouse persona, Mingus arrives in chaotic Haiti with few expectations. Posters of Charlie Carver are everywhere, each marked with the symbol of Ton Ton Clarinet, the child-stealer to whom native superstition assigns the blame for a country of disappeared children. While ascertaining the wealthy Carver family's reputation, it becomes obvious that their enemies are legion, the family patriarch cruel and uncompromising, the boy's mother desperate to leave Haiti and her marriage, but not without her son. Max plunges himself into the local scene, assaulted by the poverty and violence around him. Papa Doc, Baby Doc Duvalier and Aristide have set the stage for the unparalleled greed and larceny of bloody reigns, the country now occupied by the Americans and the CIA, dictatorships replaced by special interests and the politics of expedience, mass poverty and superstition devastating the population. Mingus plunges into a bizarre culture where a few reputations are larger than life: Vincent Paul, the King of Cite Soleil, a "cocaine Castro" with a secret El Dorado; Max's nemesis, Solomon Boukman, their fates on a collision course since Max put him in prison in the States. Boukman returned to Haiti, this is an old feud that requires resolution but Max is in no hurry, the missing boy his priority. Surrounded by hougans, vodou, bokors and black magic, Max resists the seductive pull of blackness that taunts him, teetering on an emotional cusp. Surrounded by the evil bred of greed and exploitation, Haiti offers a hellish landscape. In such a place, one man's soul is a useless commodity, yet Max ignores the siren call of corruption, sorting through villains and innocents with a grim resolve. Submerged in an exotic culture, Max muddles through a maze of half-truths, the moral morass a great challenge for the emotionally impaired PI, perhaps the perfect prescription for the reawakening of his soul: "He'd never known a place so dark." With a cast of characters straight out of Dante's Inferno, this taut thriller features an unsettling plot and an impressive protagonist who perseveres in spite of hardships, with the aid of an unexpected ally. Stone's edgy and provocative Max Mingus raises the bar i
Trustpilot
Copyright © 2022 Thriftbooks.com Terms of Use | Privacy Policy | Do Not Sell or Share My Personal Information | Accessibility Statement
ThriftBooks® and the ThriftBooks® logo are registered trademarks of Thrift Books Global, LLC