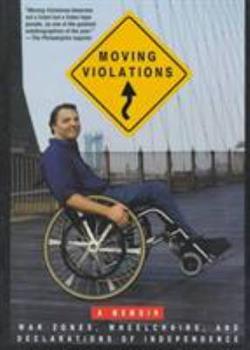 John Hockenberry's Moving Violations is one of the most entertaining, provocative, unexpected, outspoken, and occasionally outrageous books in recent memory. It is a story of obstacles--physical, emotional, and psychic--overcome again, and again, and again. Whether riding a mule up a hillside in Iraq surrounded by mud-stained Kurdish refugees, navigating his wheelchair through intractable stretches of Middle Eastern sand, or auditioning to be the...

Published by Thriftbooks.com User , 19 years ago
Upon my discharge from rehab after becoming a paraplegic myself, there was a long list of recommended books and a stack of books that had been given to me by well intending friends and family. These books were sterile and had been written by walking people. This book is a fantastic departure from the clinical spinal cord injury books. This book helped prepare me in a very different way than the help I received from family, friends, doctors or therapists for some of the wide variety of challenges I now face in daily living. This book is simply a must read for new paraplegics and their families. Honestly, I would prioritize this over the books from Christopher Reeve.

Published by Thriftbooks.com User , 20 years ago
I'm disabled. I detest almost all writing on disability. John Hockenberry is the only person I know who can write about it in a way that doesn't set my teeth on edge or have me flinging the book across the room by the end of the first chapter. I won't insult the author by saying that this book is "about" disability -- it's about one particular journalist -- but he sure knows how to tell it like it REALLY is!

Published by Thriftbooks.com User , 21 years ago
Journalist Johh Hockenberry's sitrring account of surmounting hearty obstacles - both physical and emotional - is a monument to human resilience. His exceptional prose reflects a witty, intelligent and perceptive spirit. He takes on crip sex, people's perceptions of crip challenges, and society's mental blocks toward the disabled. For example, many expect a paraplegic to entertain suicidal thoughts. "I never once contemplated suicide. Suicide is something you argue yourself out of, not into," he says. As a paraplegic, I am moved by this autobiography. As a human being, I appreciate it even more.

You keepon learning, after the last page.

Published by Thriftbooks.com User , 22 years ago
Reflection on "Moving Violations" Ellie WidmerMoving Violations, the memoir of John Hockenberry-- is a very moving story. It is frank and honest, inspiring and also surprisingly entertaining. Mr. Hockenberry uses a style that works well--he starts at the end, goes back to the beginning, and blends the story very nicely. He is a seasoned reporter; he sure knows how to keep his audience's attention! But it is not only his story that intrigues me. It is a pattern of human behavior that I have noticed before, in real life relationships as well as in autobiographies. At some juncture in the lives of a great number of people, the courage, the desire, maybe even the need for honesty appears and manifests itself in a variety of ways. After major life events, be they catastrophes or spiritual enlightenment-or any number of other life changing experiences-to relate to readers or listeners the formerly hidden or "avoided " side of one's life, the mistakes if you will, the things one would ordinarily suppress is often a significant aspect of writings and speeches. In biographies in which family secrets, for instance, are aired in public, a reader can wonder if the subject is angry or embarrassed, or even if all the facts are accurate. But in biography, when a public figure reveals the sins of his or her youth, the transgressions against the formal law or the social norms, it is usually after a significant event in that person's life has occurred. Sometimes it may be when the writer is approaching or has reached old age; but more often it is something that literally wakes one up to a new sense of priorities, a new value system, a need to be as open honest with oneself, and consequently with everyone else. Self-disclosure can be freeing, healing and energizing. But my interest in this whole issue is not just that it seems to happen, but rather why does it happen? Is it even a deliberate attempt at openness, or is it a natural instinct after a significant life experience? Is it a debt one owes to oneself to represent one's life as it really was, with the good the bad and the in between, rather that use the selective memory that sheds only positive light on the teller? Does traumatic or life jolting experience remind us so much of our finite condition, that we can no longer abide superficiality? Do we then care more about getting in touch with our true selves than what others may think of us? But most of all, is this a conscious thing? I think it may not be, but rather this behavior may be part of a growth process--a very positive one-- that many but not all people achieve in their lifetime. Could these phenomena be considered a sort of spiritual evolution in the context of a single life span? I would think there have been studies about this sort of thing. If so, I would like to know about them. I thank Mr. Hocenberry for his gift to all readers who pick up this book; it is a treasure.
Trustpilot
Copyright © 2022 Thriftbooks.com Terms of Use | Privacy Policy | Do Not Sell or Share My Personal Information | Accessibility Statement
ThriftBooks® and the ThriftBooks® logo are registered trademarks of Thrift Books Global, LLC