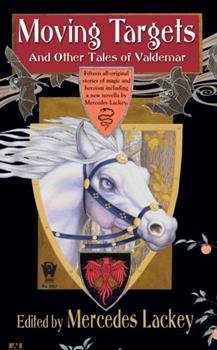 Moving Targets and Other Tales of Valdemar

(Book #4 in the Tales of Valdemar Series)

For lovers of the Heralds and Companions

Published by Thriftbooks.com User , 12 years ago
These anthologies are a terrific addition to the "pure" series of Valdemar novels by Mercedes Lackey. Written by other authors inspired by her world of Valdemar, they are an eclectic mix of stories that provide a little more insight into Valdemar as well as the people living in the lands bordering it. Tragic and comedic, they add a valuable enhancement to the beloved people of the world of the Heralds and Companions.

Published by Thriftbooks.com User , 13 years ago
Lackey and Dixon's short story "Moving Targets" in the anthology of the same name is a refreshing, lighthearted break from the sometimes overly serious Valdemar series. Lackey shows that she can find a little humor in the world she created by lampooning her own work in a delightful Valdemar/Scooby Doo spoof. Once I realized what she was doing I started hearing the old Scooby Doo cast voices, and it fit perfectly. Most of the other stories in "Moving Targets" are typical fare, some are very good, what Lackey fans have come to expect in these anthologies of Velgarth stories by many prominent science fiction/fantasy authors. However, they don't match well with the title story, being far more serious in nature. The downright plodding story of a young "Sworddancer" is so dull and serious I gave up on it after a few pages, unable to follow the story at all. As a Valdemar fan (not a Velgarth fan, I tend not to care for stories set outside of Valdemar or Karse) this anthology took care of festering Valdemar withdrawal symptoms, but wasn't entirely satisfying.

Published by Thriftbooks.com User , 13 years ago
Mercedes Lackey is one of my favorite authors. I have re-read many of the Valdemar books and this set of short stories meshes nicely with the bigger books... Lots of little pieces are filled in and those familar with the series will probably enjoy it as much as I did. A good read even if you aren't familar with the other books. I love the different tones that other writers bring to the world, very nicely done!

Published by Thriftbooks.com User , 13 years ago
Once again, we are transported to the world of Valdemar. The stories cover more than just Valdemar, taking us to unexpected places and times. The stories are well up to the standard set in previous volumes.

for fans of the classic fantasy saga

Published by Thriftbooks.com User , 13 years ago
Obviously for fans of the classic fantasy saga, the latest Valdemar anthology written by the mythos creator Mercedes Lackey and fourteen other authors ("Heart, Home and Hearth" is collaboration between Sarah Hoyt and Kate Paulk) is once again a great collection. Each tale is well written and brings a personal view to Valdemar yet the contributions remain inside the Lackey sphere; though some push the limitations. The Companions select the Chosen and that is where the fun lies whether it is Falnac a child in his first duel ("The Cheat" by Richard Lee Byers), Mickey Zucker Reichert's Herald "Dreams of Mountain Clover" or Tamar learning "What Fire Is" by Janni Lee Simmer. As always this is an excellent tribute to Mercedes Lackey as Tanya Huff, Brenda Cooper, Kristin Schwegel, Michael Z. Williamson, Stephanie Shaver, Fiona Patton, Judith Tarr, and Rosemary Edghill escort readers back to the realm of "Other Tales of Valdemar". See SWORD OF ICE AND OTHER TALES OF VALDEMAR, SUN IN GLORY AND OTHER TALES OF VALDEMAR and CROSSROADS AND OTHER TALES OF VALDEMAR for previous tours. Harriet Klausner
Copyright © 2022 Thriftbooks.com Terms of Use | Privacy Policy | Do Not Sell My Personal Information | Accessibility Statement
ThriftBooks® and the ThriftBooks® logo are registered trademarks of Thrift Books Global, LLC