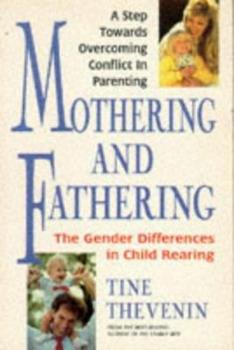 Suggests that the difference in child rearing styles between women's tendency to nurture, and men's to encourage independence, may be innate, and recommends the advantage to children of encouraging both approaches.

Arguing with your mate over child-rearing? Read this book!

Published by Thriftbooks.com User , 19 years ago
This book is one of my parenting all-time favorites. I read it over a year and a half ago, so my memory might be a little off. My husband and I disagreed loudly on many parenting issues in the first year and a half (including breastfeeding after one year, but he has given up on arguing with me). This book helped me to understand and appreciate my husband's childrearing viewpoints. Thenevin explains that generally women are nurturing and men value and promote early independence. She argues that both styles are vital to the child's development. Generally speaking, from birth to two years (my estimation) the child is dependent on the mother, who (hopefully) nurtures best. From one year on (again, a just an estimation) the child begins to leave the "secure base" of the mother and the father begins to take a greater interest in the child. The father adds more fun, more physical play, and encouragement to do things independently. Of course, both genders nurture and encourage independence at various times. Thenevin's book simply demonstrates the significance of these gender differences in parenting. In addition, I found Thenevin's explanation of male-dominated child-rearing books enlightening. She argues (again, generally speaking) that male authors are more comfortable being authoritative and giving direct orders such as "never put a child to sleep in your bed" or "you must start scheduling now." They also have no problems with promoting themselves as experts. In contrast, female authors will suggest things rather than flat out tell you how to do things. Obviously, there are glaring exceptions, such as Dr. William Sears and Dr. Jodi Mindell, but overall I believe Thenevin is correct. Reading that was extremely helpful in understanding the fierce, early independence promoted by many male authors. These authors include Dr. Terry Brazelton, who believes babies should learn how to "self-soothe". Dr. Richard Ferber advocates a "crying it out" method for "helping" a child sleep through the night. And finally, Gary Ezzo, a best-selling author who does not hold any scientific or medical degree, yet promotes scheduling from birth and eliminating nighttime feedings to suit parental needs. As a result, one essentially ignores and/or limits the infant's biological needs for touch, vestibular movement and frequent feedings, which research has shown is necessary for brain and physical development. Sadly, these authors are promoting their own gender biases that are not appropriate for young infants. Young infants should be nurtured and responded to quickly. True independence comes later. The consequences of insecure attachment in infancy are prevalent in adulthood and visible throughout our society. Anorexia, learning and behavioral problems, anxiety disorders, inability to form long lasting relationships and estrangement from one or both parents are just a partial list of problems. Thenevin encourages new mothers to follow and embrace their

Published by Thriftbooks.com User , 22 years ago
This is one of the best books for new parents, especially new mothers. Tine Thevenin is supportive and encouraging to new parents who want to follow their hearts and instincts when carrying for their children. She gives credit to the unique and different parenting styles of men and women and acknowledges that both are needed to raise a healthy, happy individual. More importantly, she tells mothers that they should not have to fight off their "mothering instincts" or follow a guide book to parenting. She praises women for their often innate ability to raise a child without all the outside advice. Good Work Tine! Readers scared off by her previous book, The Family Bed, may find this book more helpful (although both books are great).

Affirming and Confirming of our roles as parents

Published by Thriftbooks.com User , 23 years ago
The author steps out and defends the God-given, or natural if you prefer, roles of mothers and fathers. She makes a case that there are certain behaviors that mothers do and SHOULD exhibit, and that fathers behaviors/roles are different and SHOULD be for healthy development. Ms. Thevenin is brave especially in this day's relativistic looking at the family as "open" with different options "ok", such as two females or two males as the parents. Thevenin's assertations strongly detract from same-sex parenting's effectiveness. Bravo Tine! I found comforted reading the book; behaviors of my husband toward the children that used to bug me I now realize are actually good (and needed) for the children to become whole, well-rounded individuals.
Trustpilot
Copyright © 2022 Thriftbooks.com Terms of Use | Privacy Policy | Do Not Sell My Personal Information | Accessibility Statement
ThriftBooks® and the ThriftBooks® logo are registered trademarks of Thrift Books Global, LLC