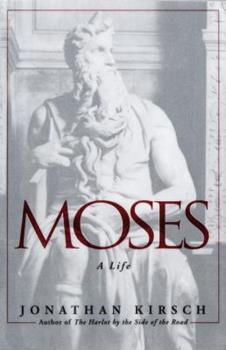 A portrait of one of the most dynamic figures of the Old Testament explores Moses' diverse roles as shepherd, warrior, spiritual leader, miracle worker, and lawgiver.

6 ratings
Write a review
Published by Thriftbooks.com User , 6 years ago
I love this book. The book is a really something to read. How Moses was loved and hated by many people. I would read it again.

Published by Thriftbooks.com User , 14 years ago
As someone who was raised in a multi-faith home (Buddhist mother, Catholic father) and who was always intrigued by Cecil B. DeMille's rendition of Charlton Heston as Moses, as well as Ben Kingsley's and Burt Lancaster's respective title roles, I wanted to find something less Hollywood about my favorite biblical hero in written form. This book was it, and very thought-provoking. I didn't find it offensive, but instead, found it was something along the lines of a written History Channel biography about Moses. This book moved me so much, I gave it to an Islamic co-worker as a gift, because Moses does transcend all faiths and appeals to us all. This is the 2nd book I've purchased from this author. Another good read, Harlot By The Side of the Road is highly-recommended.

Moses the man, the myth, and the legend

Published by Thriftbooks.com User , 16 years ago
Objective and comprehensive. I enjoyed it as much if not more than his other work. Mr. Kirsch does not embellish Moses nor does he demean him. He makes him human. It is a biography compilled from numerous sources, rich in detail and broad in scope. The story of a man with all his human strenghs and weaknesses convinced by God to undertake a task he did not want and did not feel capable of. This work might be objectionable and unsettling to the faith based, but read with an open mind it rewards the reader with insight and new appreciation. A great tale in every regard that can nurture your spirit and reinforce your faith if read with an open heart and an open mind.

i never read the bible until now

Published by Thriftbooks.com User , 20 years ago
this book was brilliant. if you take a look at what biblical biographies are available in the world, you would realize how good this one is. kirsh gives an engaging analysis into both the religious and historical evidence of not just moses, but the events surrounding his life as well. this includes the egyptian lifestyle, and the history of the early mediterranean. i went to catholic school, and i never read the bible until after this book!

A Journey to the Top of the Mountain

Published by Thriftbooks.com User , 23 years ago
At this time of year, many of us will dust off our video copy of DeMille's THE TEN COMMANDMENTS, prop our children in front of the tube, and bask in the glorious figure of Moses a la Hollywood.But perhaps our time would be better spent getting to know the enigmatic figure presented in the Bible.Jonathan Kirsch's book MOSES: A LIFE helps us to do just that. In clear prose, Kirsch attempts to knit together a portrait of one of the most influential figures in Western Culture...a figure who may not have even existed.In so doing, Kirsch draws not only upon the Bible but also on other records related to the man credited with delivering God's Law. These sources include rabbinical literature as well as the writings of philosophers (Philo, Freud). While the result is not without its puzzles, the overall effect is that of understanding. It is perhaps fitting that Yahweh, the enigmatic God of the Hebrews, should pick as his messenger a man as complex and contradictory as himself.Kirsch does not flinch from recounting these contradictions (nor does he allow sympathy for his subject to cloud the fact that no contemporary record of Moses--outside of the Bible--exists). Further, he is not above explaining some of the darker passages of Holy Writ--including God's attempted murder of the messenger he had just chosen to deliver his people (a truly bizarre and difficult passage). As a result, the popular myths about Moses fall. But what remains is a figure far more interesting.Kirsch does assume that the reader is somewhat familiar with the J, E, P, D composition of the Pentatuch (a theory now widely accepted and explained very well in Friedman's WHO WROTE THE BIBLE?), and, at times, his examinations of rabbinical special pleading are tedious. But, overall, MOSES: A LIFE is a highly readable and interesting work, with much to offer for non-fundamentalist believers and non-believers alike.

You can feel the Man

Published by Thriftbooks.com User , 23 years ago
This is a truly insightful book. Not only does it cover various sources in and around Moses's life, but it does so in an amazingly amicable prose. A definite must for everyone with any sense of theological thought.
Trustpilot
Copyright © 2022 Thriftbooks.com Terms of Use | Privacy Policy | Do Not Sell or Share My Personal Information | Accessibility Statement
ThriftBooks® and the ThriftBooks® logo are registered trademarks of Thrift Books Global, LLC