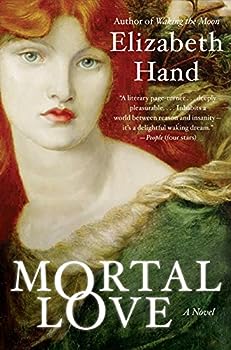 In the Victorian Age, a mysterious and irresistible woman becomes entwined in the lives of several artists, both as a muse and as the object of all-consuming obsession. Radborne Comstock, one of the... This description may be from another edition of this product.

Published by Thriftbooks.com User , 14 years ago
This is a brilliantly written but dark fairy tale. The main characters inner lives are very richly developed through vibrant descriptions of their experiences and the things they say about themselves. Hand's descriptions of the characters' sensory experiences, especially sight and smell, provide the reader with a strong sense of what their lives must have been like. Her descriptions of 19th century London are so detailed and vivid that I felt as if I was there. The story is a hard to bear because it concerns madness and physical mutilation (described in great detail) but ultimately rewards the reader with a vision of the agony and ecstasy some artists must endure. The tale is complex involving intertwined strands from three main characters living in two centuries, as well as several lesser characters. Although the main threads are satisfactorily resolved at the conclusion, many elements of the story remain mysterious, e.g. is Learmont a human or fairy and why does he always carry scissors? If you like John Crowley's Little Big, you may like this book.

Published by Thriftbooks.com User , 15 years ago
Elizabeth Hand writes exquisite, brilliant, beautiful prose and she writes it about some of the oddest and most twisted characters and situations imaginable. In this work, her use of lovely metaphors and the virtuosity of her technique with color makes for sublime reading. Her take on the role of the muse in artistic creation is original and pretty much mind-blowing. All of this and a great rollicking adventure and love story. If you enjoy the darker works of Joyce Carol Oates, Margaret Atwood, or the fairy tale collections edited by Terri Windling and Ellen Datlow, you'll enjoy this, but fans of A. S. Byatt, Guy Gavriel Kay, Patricia McKillip, or Robin McKinley will also find something here. I suspect even magic realism fans, those who love Garcia Marquez, Toni Morrison, and Isabel Allende, would also like Hand. Also recommended are her first novel, Waking the Moon and her recent story collection Saffron and Brimstone.

Published by Thriftbooks.com User , 15 years ago
This woman is a genius writer, IMHO! Of course, in the case of this novel, I know I'm biased, because she wrote it just for me. Well,at least it feels that way... what she's done so brilliantly is weave in the myth of the Muse, the creative genius that can drive men mad, or, wait, is that woman the Faery Queen? Both, neither? Woven in are the spooky tropes of a gothic thriller,and many of the stars of the Pre-Raphaelite Brotherhood, my college Art History heroes. She re-creates the laudenum laden late Vitorian era in such a bold and flawless way she literally transported me there. Beautiful bold writing and a show stopping cameo by non other than Esperanza Wilde herself make this book, to me, amazing.

Published by Thriftbooks.com User , 17 years ago
I wont bother giving a synopsis of this book (You can get that from the rest of the reviews), I will instead simply tell you what I think of it as a whole. Amazing, astounding, a soul bearing journey of literary genius. Ms. Hand's descriptive prose and and melodic storytelling are hypnotic and enchanting. If you are looking for something different, something with depth and texture, you wont find anything better than Elizabeth Hand's latest seduction.

Published by Thriftbooks.com User , 17 years ago
MORTAL LOVE is an adult fairy tale or myth. It probably helps to have some knowledge of The Maginogi and other Celtic tales, as well as the poems of Yeats and the writing of Robert Graves. Understanding who Tristan and Isolde were and the Pre-Raphaelites won't hurt. Else, how can one put this convoluted tale in perspective? For example, just try to identify the protagonist. Is it Daniel, the reporter on Sabbatical in modern day London? Or Val, the sedated grandson of the artist Comstock (who is yet another candidate) who knew Swinburne? Perhaps these men are all incarnations of someone else? And what about the girl Larkin. Who is she? Drifter, bewitched, cursed, or a shape shifter? I bought this book and read it because a critic writing for The Washington Post Book World described it as `sublime'. I suppose that terminology fits, but it occurs to me that unless you are fairly well read in literature, and perhaps an English major, you may not get some aspects of this mysterious tale. I'm not sure I got it, but over and over throughout the book I experienced "recognition' or "deja vu" regarding various people, scenes, and items of interest to the protagonist of the moment (at least three deconstructed and overlapping tales are told) such as green absinthe, apple blossom flowers and owl feathers. One of the characteristics of myths is their episodic nature. They seldom make sense to the rational mind. They appeal to the artistic side of the brain. Do you know who Blodeuedd was? Her name means flowers in the old Welsh. She was the wife Math and Gwydion of conjured out of flowers for Llew Llau Gyffes. She did not choose her husband and when she fell in love with another, she was punished by being turned into an owl. The Pre-Raphaelites were interested in art created before Raphael rediscovered perspective i.e., art without perspective whose content reflected mythical tales and the hidden (occult) world visible only to those with eyes to see. They were also interested in Theosophy. LIke the mythmakers of old,Elizabeth Hand employs skillful use of language (incredible metaphors), characterization, irony, and other narrative devices. As a result, she has written a fine and scholarly bit of literature. If you are interested in 19th century art, Jungian archetypes, and the masks of the Gods (and Goddesses) you will probably enjoy it.
Trustpilot
Copyright © 2022 Thriftbooks.com Terms of Use | Privacy Policy | Do Not Sell My Personal Information | Accessibility Statement
ThriftBooks® and the ThriftBooks® logo are registered trademarks of Thrift Books Global, LLC