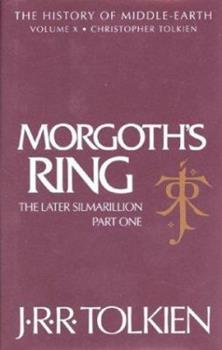 (Book #10 in the The History of Middle-Earth Series)

In Morgoth's Ring, the tenth volume of The History of Middle-earth and the first of two companion volumes, Christopher Tolkien describes and documents the legends of the Elder Days, as they were evolved and transformed by his father in the years before he completed The Lord of the Rings. The text of the Annals of Aman, the "Blessed Land" in the far West, is given in full. And in writings never before published, we can see the nature of the problems...

Published by Thriftbooks.com User , 16 years ago
I grew up on tolkieniana: I cannot rememer the first time I read JRRT's works, but I cannot have been more than a few feet tall. tolkien's universe is so unseparable from my own that at times I look at the falling oak leaves around me and think that they are mallorn. no other bookworld is as real to me as his: no other fictional history is as historical as his. the morgoth's ring is probably the least read piece of tolkien lore, and for good reasons. it is hard to get your hands on (had it not been for peter jackson's movies, it would probably not exist in paperback), and is considered to be one of christopher tolkien's shadiest amalgamations of facts. the criticism is valid, however, the morgoth's ring answers questions I have pondered for years. a lot of the gaps in the silmarillion can be filled out, or at least lessened, by information collected in this volume. although a strange compilation of notes to a tolkien novice, to a tolkieniast it is of great value. thus, I strongly recommend it to a more tolkien-educated audience.

Published by Thriftbooks.com User , 18 years ago
This is the good stuff...my favorite volume of the whole series. The centerpiece, in my mind, is the debate of Finrod and Andreth, which through alternate existing versions and Christopher Tolkien's editorials, we can piece together the REAL origins of the Edain in Tolkien's universe. I don't want to give it away, but it will absolutely shock even those who are extremely familiar with the Silmarillion and Lost Tales of Numenor and Middle Earth. The other groundbreaking info is JRR's decision to go back and re-write a lot of what would become the Silmarillion...he was considering such plot elements as placing the sun and moon before the Two Trees, which would radically alter the entire universe as we know it.I was hoping to find as much of interest in the companion Volume 11 but was disappointed...this, #12 (Peoples of Middle Earth), #9 (End of the Third Age) and #5 (Lost Road and Other Writings) should be the next steps for the Tolkien diehard who wants to go even further than the Silmarillion and Unfinished Tales of Numenor and Middle Earth have taken them.

Late developments in the story of the Silmarillion. . .

Published by Thriftbooks.com User , 20 years ago
. . .plus cultural information!This book, the first of two in the "History of Middle-Earth" series dealing with later textual developments in "The Silmarillion" provides a great deal of information on how Tolkien's philosophical and theological development influenced the later aspects of this work. (As the reader should remember, Tolkien worked on these legends for more than 50 years.)However, one of my greatest delights in "Morgoth's Ring" was a lengthy essay detailing aspects of Elven culture, including information on courting, betrothal, marriage, and child-rearing. Also included is a discussion of the judgement of the Valar concerning the remarriage of Finwe of the Noldor.Throughout, the volume demonstrates that Tolkien wished to truly create a complete culture, not merely a history.A worthy addition to this series.

At last, we are given insight into The Silmarillion itself

Published by Thriftbooks.com User , 21 years ago
The most important part of this book is the section titled "Laws and Customs of the Eldar". For the only time in his long career of writing essays and opinions essentially intended only for himself the author of The Lord of the Rings set aside story and drama to explore the social and cultural heritage of the Noldor and the Eldar in general.All the other works in this book fall into place only if the reader understands the peculiar outlook that Tolkien envisioned for the Elves. They were not truly deathless, but recognized many forms of death. And for the Elves the union of spirit and body was as intrinsic as breathing and life. All their griefs therefore proceeded from the disruption of these fundamental precepts in Aman, where such disruption should never have occurred.Though people speak highly of "Athrabeth Finrod ah Andreth" it really has no meaning without the context provided by "Laws and Customs". A great many questions are answered in very matter-of-fact fashion by the author, often as asides.The last section, "Myths Transformed", actually leaps ahead to a period late in Tolkien's life when he began to unravel all the tales and mysteries and design a completely different cosmology. Had he finished this later work, Tolkien would have rewritten his Silmarillion completely and in doing so would have destroyed some of the most beautiful myths of our time.

Published by Thriftbooks.com User , 23 years ago
Of all of the books concerning the development of the Silmarillion, I've found that Morgoth's Ring is the most compelling. The dialog between Finrod and Andreth has such depth and feeling. Never before in his writings has dialog and character development been so rich. The meaning of life/love and the despair that is underlying the story is heart rending. Her last words to Finrod about asking Aegnor to be careful just wrung my heart. I loved how she expressed the depth of her love: "I would give everything for just a year, a day, an hour of the Flame" (something close to that I think) A reader cannot understand Arwen's last words to Aragorn without reading this story or Luthien's love for Beren and its implications. One more thing, has anyone thought to reconstructing the Silmarillion and including all these stories. If I had only the time and money...
Trustpilot
Copyright © 2022 Thriftbooks.com Terms of Use | Privacy Policy | Do Not Sell My Personal Information | Accessibility Statement
ThriftBooks® and the ThriftBooks® logo are registered trademarks of Thrift Books Global, LLC