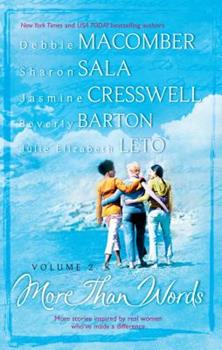 (Part of the Blossom Street Series)

Published by Thriftbooks.com User , 13 years ago
What Amanda Wants by Debbie Macomber: Did you ever wonder what to say to say to someone who is receiving aggresive treatment for cancer? Many people avoid the person because they can't find the words, or don't know what to do. This story is about a teenager with leukemia, and the dear friend who stands by her side, offering the right blend of support and friendship, throughout her treatment, and provides a heartwrrming lesson on how to interact with someone who is so seriously ill. It also showcases a charitable organization that helps teens with cancer, so they aren't treated like children in the pediatric ward, nor like adults. The strong tie-in to the Blossom Street series was a nice surprise! The Yellow Ribbon by Sharon Sala is about a scarred young woman and her rewarding job in an Assistant Living facility. She is particularly drawn to a grandmotherly client who lost the man she loved in WWII. Through a charity that gives Second Chances to seniors who have unfulfilled dreams, the young woman is able to grant her older friend's fondest dream of seeing the man's grave in Italy. Through this journey, the older woman makes peace with the choices she made in her life, and the young woman discovers that her scars don't have to be a hindrance to true love. I particularly enjoyed the romantic Italian setting, a small vineyard south of Naples. The Way Home by Jasmine Cresswell is a very well-written story about a woman who worked hard to fight back from a sad/painful childhoom being raised through the foster care system, to become a successful and secure adult. While employed by a family-owned business, and nearly engaged to its heir, she is organizes a gala event to raise money and awareness for Dressed for Success, a charity her early life allows her to relate very closely to. Suddenly, her well-built world falls apart when her employer is led to believe that she is guilty of embezzling funds from the company. With the help of her foster-brother, who is now a lawyer, she tries to prove her innocence and re-establish her reputation. I just love the crime-solving aspect of this story, and I'm amazed with how much substance the author was able to pack into so few pages. This read more like a full-sized novel than so short a story! Shelter From the Storm by Beverly Barton is a nice story about two single parents who come together through their children's friendship. One is a construction worker and the other is the manager of a Safe House, and their relationship grows as they help the women who live at the home. There's an interesting cast of supporting characters, and lessons about forgiveness, second chances, and the dangers of being judgmental. Into the Groove by Julie Elizabeth Leto is set in a dancing school for young, troubled girls in Spanish Harlem. The proprietor of the school is a transplanted Southern lady with lots of spunk and moxie. When an interesting Latino man seems suspiciously interested in the school, she discovers that he d

Published by Thriftbooks.com User , 16 years ago
"What Amanda wants" by Debbie Macomber. The cancer was back, but though she will miss much of her high school socialization, all Amanda wants is her peers to understand that in spite of her illness she is still Amanda who needs their friendship. She finds solace with the Melissa's Living Legacy Foundation. "The Yellow Ribbon" by Sharon Sala. Frankie arrived at Just Like Home assisted living facility to provide beauty treatments to the seniors. Frankie especially likes octogenarian Charlotte who regrets she never married her sweetheart who died in WW II. Now Second Wind Dreams is sending Charlotte accompanied by Frankie to Italy to visit her Daniel's gravesite for the first time. "The Way Home" by Jasmine Cresswell. Amy has come a long way from her foster child days as she climbs the corporate ladder. That is until she is accused of embezzlement. While clearing her name, Amy gets involved with Dress for Success Los Angeles. "Shelter From the Storm" by Beverly Barton. In Chattanooga, Cathy created Shelter from the Storm, because Street Haven at the Crossroads, a woman's shelter in Toronto, helped her when she was abandoned, penniless, and pregnant. Tate is attracted to Cathy, but she fears dating him because he is on the shelter's board and might learn about her late teen years when she was just like her residents. "Into the Groove" by Julie Elizabeth Leto. In Spanish Harlem, Groove with Me tap dance teacher Georgia Rae confronts Diego who has been hanging outside her dance studio all day. Diego searches for the child he sired years ago that his then girlfriend failed to tell him about just before the military deployed him overseas; only recently has he learned of Amber. These five terrific inspirational tales showcase organizations led by real females trying to make a difference. Harriet Klausner
Copyright © 2022 Thriftbooks.com Terms of Use | Privacy Policy | Do Not Sell My Personal Information | Accessibility Statement
ThriftBooks® and the ThriftBooks® logo are registered trademarks of Thrift Books Global, LLC