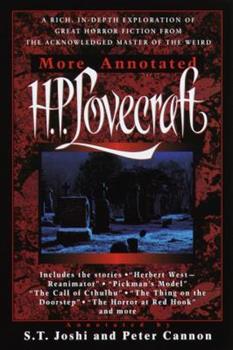 Explore the marvelous complexity of Lovecraft's writing-including his use of literary allusions, biographical details, and obscure references in this rich, in-depth exploration of great horror fiction from the acknowledged master of the weird, including the stories "Herbert West-Reanimator", "Pickman's Model", "The Call of Cthulhu", "The Thing on the Doorstep", "The Horror at Red Hook" and more. Did Lovecraft believe in ghosts or paranormal phenomena?...

Published by Thriftbooks.com User , 19 years ago
While there are some rare nuggets of interesting information in the annotations, I find aspects of this collection to be disorganized, haphazard, and perplexing. The stories, 10 in all, represent a hodgepodge of Lovecraft's greater and lesser writings, arranged chronologically from 1920's "The Picture in the House" to 1935's "The Haunter of the Dark." The editors apparently want to show the evolution of Lovecraft's writing over the years and choose not to build a collection based on any particular theme. This makes for some interesting story selections: "Herbert West--Reanimator" is included, which somewhat surprised me since Lovecraft largely disavowed this work (the idea and format being prescribed by someone other than himself). "The Horror At Red Hook," a strangely unsuccessful story to my way of thinking, as well as the rather formulaic "The Shunned House" can also be found here. On the plus side, some real classics are given the annotated treatment. "The Picture in the House" is particularly welcome here, as it is perhaps Lovecraft's most horrifying short piece of fiction, and a copy of the referenced infamous picture is included for the reader to view. "The Hound" is an effective if rather traditional horror tale, the annotations for which provide some important information on the French Decadents and other outre movements referenced in the story. "Cool Air" is one of the author's most recognized stories, and the notes stress the fact that the story was written before air conditioning made its way into housing units. "Pickman's Model" is still a disturbing read, even though the ending lacks the punch today it probably had in Lovecraft's time. The three real jewels of this collection are the seminal works "The Call of Cthulhu," "The Thing on the Doorstep," and "The Haunter of the Dark" (one of Lovecraft's final stories and one often given less attention than I feel it deserves). The annotations are very useful in a complex work such as "The Call of Cthulhu," but in many cases they seem forced, contrived, and tiresome. Much of the time, the notes simply define terms such as cyclopean or eldritch, point out obvious concepts and alternate spellings, and endlessly reference other notes in this and the first collection of annoted Lovecraft stories. Worst of all, this book has no table of contents, and one can only see for sure what stories are included by leafing through the pages of the text. The comments on antiquarian concepts and literary references makes this book worthwhile, but I found it to be less enlightening than I expected. Most of the annotations are unfortunately useless or repetitive. Even the pictures included in these pages, largely of old churches and cemeteries, do not correspond exactly with Lovecraft's settings The many quotes from Lovecraft's letters are interesting, but the letters can and should be read in their entirety in order to avoid mistaken impressions due to missing context. The book is also affl

The Contents of This Book

Published by Thriftbooks.com User , 20 years ago
With so many different Lovecraft collections out there, it may help prospective buyers to know what's actually in this one:[By Peter Cannon:] Acknowledgments; Introduction [a discussion of H. P. Lovecraft and the selections in this volume]; [Hereupon stories by Lovecraft:] The Picture in the House; Herbert West--Reanimator [a collected pulp magazine serial]; The Hound; The Shunned House; The Horror at Red Hook; Cool Air; The Call of Cthulhu; Pickman's Model; The Thing on the Doorstep; The Haunter of the DarkThough the title of this volume means that it's a sequel to The Annotated H. P. Lovecraft, in fact More Annotated H. P. Lovecraft stands just fine without the previous volume and the two volumes could just as well have been published in reverse order. Indeed, a good argument could be made that More Annotated is the better volume with which to start, especially for Lovecraft novices, since it features a number of shorter, grabbier stories plus Lovecraft's signature (though not his very best) story, The Call of Cthulhu. But the truth is that either volume can be read without the other, though they're complementary.Oddly enough, though More Annotated contains about twice as many pieces and costs a little more than The Annotated, it's actually almost 50 pages shorter. This is because, unlike The Annotated, it doesn't contain a novella, has only a fairly short introduction which already incorporates introductions to the various stories, lacks individual story introductions by S. T. Joshi and tributes to Lovecraft by various horror writers, and also lacks the appendices Joshi previously included.Though it looks as though Cannon must have been primarily responsible for selecting and assembling the contents of this volume, once again it appears that Joshi was in charge of the voluminous footnotes (this is, after all, "Annotated H. P. Lovecraft"), judging from their familiar style and approach, just as Joshi prepared the footnotes for The Annotated H. P. Lovecraft and for Penguin's The Call of Cthulhu and Other Weird Stories.Assuming that to be the case, once again Joshi provides plenty of useful and interesting information in his dry and occasionally condescending manner. Do we really need to be told who the Puritans were (p. 13), what Calvinism and anti-Darwinism are (p. 38), or what a satyr and a lemur are (p. 151)? Some other times, Joshi seems to be talking to himself. For example, in footnoting the first textual mention of Herbert West in the story of the same name, Joshi writes: "It is difficult to know where Lovecraft came up with the name Herbert West. West is by no means a specifically New England name, even though most of the story takes place in New England." In other words, Joshi is wondering aloud how Lovecraft came up with the name, something that might matter to a biographical researcher -- Joshi has already written and had published a long biography of Lovecraft -- but which otherwise provides no insight for or appeal to the i

Published by Thriftbooks.com User , 21 years ago
HPLovecraft was the greatest horror writer since Edgar Alan Poe and there have been none as great since. This is the second volume of hopefully a long series that give his stories with a very detailed annotation on words and items in the story that are no longer in common use (the stories were written in the time frame of 1920 to 1935) and the background. HPL created a rich mythos that was very involved. The annotations here provide crossreferencing to other stories. The stories included in this anthology are not all of his biggest or greatest, but the information makes them all interesting. The only warning is that if you have not read these stories before, either read them from some other book or read them with out the footnotes first time. The stories have a flow that sets a mood. Reading the footnotes the first time will disrupt the continuity.

An amazing resource for a true fan of Lovecraft's work.

Published by Thriftbooks.com User , 22 years ago
This book is for anyone who has struggled through some of the archacic terms or just wants to know more about Lovecraft. I eagerly await a third edition.
Copyright © 2020 Thriftbooks.com Terms of Use | Privacy Policy | Do Not Sell My Personal Information | Accessibility Statement
ThriftBooks® and the ThriftBooks® logo are registered trademarks of Thrift Books Global, LLC